How would you like to bite into some crunchy potato chips, taken out from a sachet, bearing a photo of Adolph Hitler or for that matter, bite into some spicy nachos bearing photos of Kim Jong-un, Robert Mugabe and Alexander Lukashenko, some of the ill famous dictators of our times. Would you derive some kind of sadistic joy to crunch these chips?

Perhaps my Indian friends would certainly enjoy biting under their teeth, crispy chips named after that cruel Mughal tyrant, Aurangzeb or Perpetrator of Jalianwala baug massacre, General Dyer or may be my friends from Pakistan, can get this pleasure by savouring salted peanuts from a packet bearing image of their military dictator Zia. The possibilities are endless, aren't they?

A Dutch designer, Virginie Moerenhout has now come up with an art project that features many of the world's dictators on packages of potato chips. She is calling these chips as “Dictator Chips” and the potato chips feature Kim Jong-un, Robert Mugabe and Alexander Lukashenko, from North Korean, Zimbabwe and Belarus.

Late Libyan leader Muammar Gaddafi and Syria's Bashar al-Assad also appear on the packages. Virginie Moerenhout says that she wants to raise the issue of hypocrisy of nations which champion democracy, but have business links with regimes they often criticise. She adds further: "If dictatorships are evil, then why do we do such good business with them?" 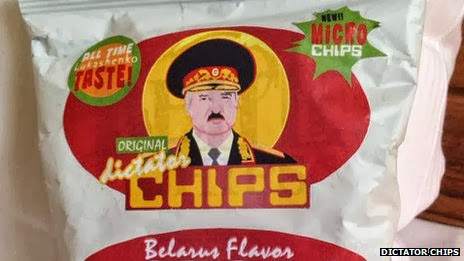 I do not know if news of these potato chip packets has reached North Korea or Zimbabwe but it has definitely reached Belarus, whose leader Lukashenko is often described as "Europe's last dictator." “Charter 97” is an independent web site from this country. The readers here have generally welcomed the idea. Here are some of the comments.

"will choose again - and forever!" (The potato chips) "Warning: Do not choose dictators for President." This is not a chewing chip!

They are magical, tastefully vomiting.

For the toilet bowl with a portrait at the bottom LUKADZENKA!

Potato chips - the strongest carcinogen (with all the benefits of potatoes), and a silly dictator – twice.

Well at least not condoms!

Scarecrow collective. Belarus had disgraced himself with it on the whole world.

We are ashamed for Sasha (Alexander Lukashenko ).

Tomorrow trip to Holland. I will look for the right chypsy

Many commentators have suggested that these images also could be printed on consumer products such as voodoo dolls, doormats, ashtrays and toilet paper.