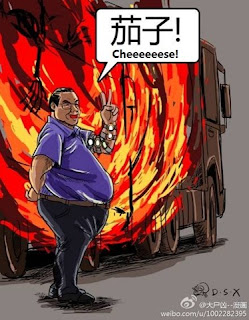 About an year ago, a deadly collision took place between a long-distance double decker sleeper coach carrying about 39 people and a methane carrying tanker in the middle of the night in the city of Yanan; Shanxii province in northern China, killing 36 people on the spot. The front part of the bus heading to Shaanxi's provincial capital of Xian from Inner Mongolia, was immediately engulfed by flames and was seriously damaged. Since most of the passengers were sleeping, number of fatal casualties has been so high.

The accident has been quite horrible, yet the real story is not the accident but something else that happened later. As happens anywhere else in the world, Police officers and rescuers reached the spot of the wreckage of the bus and the tanker after some time. Amongst these officials, who had reached the accident spot, there was a road safety official Mr. Yang Dacai. 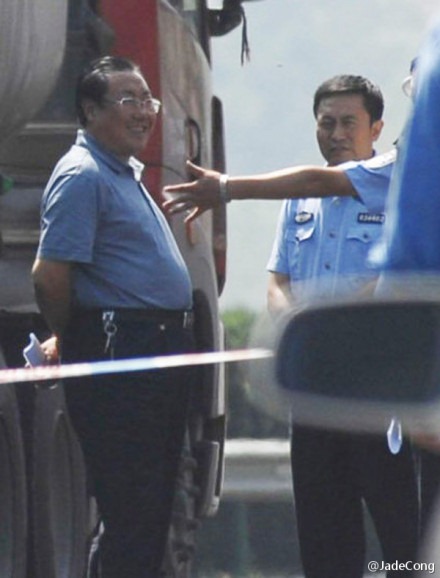 Next morning, as Chinese media and news papers splashed news of this horrible accident along with photographs all over the country. A sharp eyed netizen, @JadeCong noticed that in one of the photographs of the accident, the road safety official Mr. Yang had a highly inappropriate grin on his face or in other words, he was seen laughing. He promptly cropped the picture to accentuate the faux pas and copy-pasted it onto the Chinese hybrid of Facebook and Twitter, Sina Weibo, which has more than 300 million subscribers. He wittily commented on his post, "The official's emotions have stabilized." The post received about 6,700 shares and 1,600 comments.

Most of the Chinese netizens felt resentment after seeing the photographs of this fat bellied official with his “ hands behind the back” posture which appeared to them as the couldn't-care-less attitude. Soon someone found out that this official was Yang Dacai, (杨达才) the boss of Shaanxi's Safety Supervision Bureau! One net user says on KD Net, a popular discussion forum "When ordinary people die in an accident, the masses do not really ask you to cover your face with tears. But in the face of our compatriots losing their precious lives, you should have the courtesy to at least to show some respect, right? This is the bottom line of being a human." Another Weibo user @死心补钙 wrote, " 'Well-fed officials, emaciated people. If officials are skinny, the people will be well-fed.' This was what we were taught by the teacher when we were still young…It still applies even though life gets better now. You can just tell at first glance that people with greasy hair and fat ears are just up to no good~"

In China, wearing of expensive luxury watches by officials is always the last straw, which brands them as corrupt. Mr. Yang, besides his careless attitude was now also thought to be corrupt and outrage grew against him by leaps and bounds. Finally, the local work safety administration responded to the matter, by saying that Yang did rush to the accident site all the way after receiving the news. However snapshots published on the net tell a different story and netizens were not satisfied at all. The Communist Party's discipline commission in Shaanxi, made an investigation into Mr Yang's "inappropriate behaviour of 'grinning' as well as wearing luxurious watches" and has found him guilty of "serious wrongdoing." The discipline commission says that they are further investigating "trails of [Mr Yang's] other wrongdoing."

Following a probe, Yang was sacked for "serious wrongdoing" and then expelled from the Communist Party in February 2013. Finally on 30th August 2013, Yang Dacai's trial opened at the Xi'an Intermediate People's Court in Xi'an, northwest China's Shaanxi Province. Before his trial, he had defended himself saying , that he "used legal income" to buy a number of watches, saying that the most expensive one he owned was worth 35,000 yuan ($5,550, £3,420). 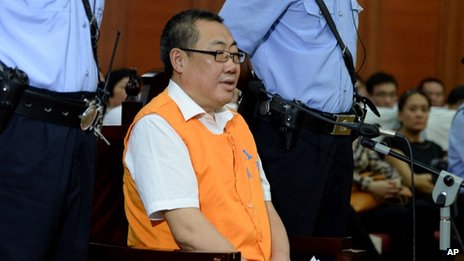 However during trial last week, he seems to have changed his stand and said that he could not explain where wealth of 5m yuan ($817,000; £527,195) came from and pleaded guilty to corruption charges. The Xi'an court found Yang Dacai guilty of taking bribes and possessing "a huge amount of property of unclear origin." He was sentenced with a 14 year jail term and all the bribes and illicit property would be confiscated by the state treasury. For Yang Decai, it was the most expensive laugh ever.

I am absolutely awed at this speedy delivery of justice in China. In India, corruption cases go on for years and if the accused is wealthy, decades. I have no idea about the way legal courts conduct their business in China, but the efficiency with which they operate is definitely note worthy.

Hats off to Chinese netizens! I am just amazed at the alertness and investigative nature of Chinese netizens, after they smelled a rat. This is what is required in India. Our media have lately been doing a great job regarding digging out scams by Government officials. Netizens must lend an helping hand to media in India too.