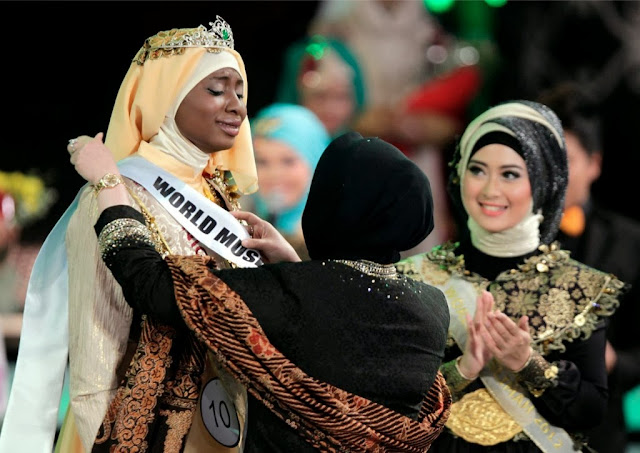 A beauty pageant, known as Miss World, is currently being held on the island of Bali in Indonesia. I do not have to really describe the event with its passing parades of beauty, as almost everyone is aware of these competitions. Many Indonesians however are opposing this competition as they feel that it is some kind of soft pornography and is anti Islam. Indonesia can hardly be described as a hardliner Islamic country, with people being highly tolerant about other religions and even Islamic rituals and regimes. Yet, thousands have taken to the streets in Indonesia in recent weeks to protest against Miss World, denouncing the contest, and have been burning effigies of the organizers. 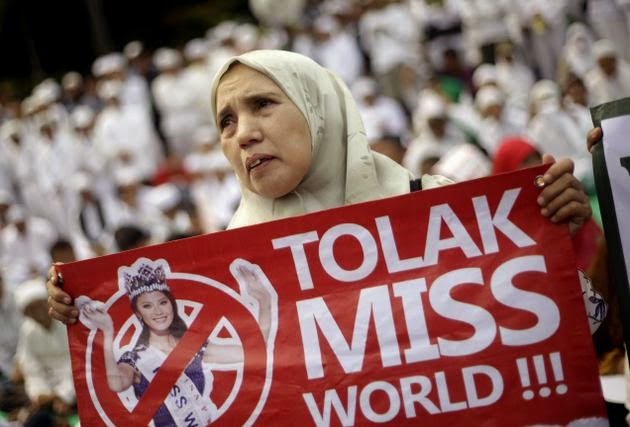 The Indonesian Government, to appease the agitators, first made the organizers to pledge that they would drop the famous bikini round, most hated by Islamic hardliners. However when it was found that the radical anger was not appeased and the protest movement snowballed, the Government bowed to pressure and ordered the whole pageant be moved to the Hindu-majority island of Bali, where it opened on September 8. Yet the organizers say that the September 28 final would still be held in and around the Indonesian capital, Jakarta, where there is considerable hardline influence. Miss World organisers say that it would be "impossible" to stage the final in Bali, as even just getting the venue and all the accommodation in Bali is impossible.

Meanwhile, to challenge the British run Miss World contest, a new Islamic beauty contest has come up as a a riposte to the Miss World pageant. This pageant is called as World Muslimah 2013 and as expected, eschews any exposure of skin of the participating contestants. To qualify, the contestants had to be proficient in reading the Koran and have some academic, sports and cultural achievements. They must wear a hijab (head scarf) in their daily lives and even submit an essay titled “My hijab experience”. 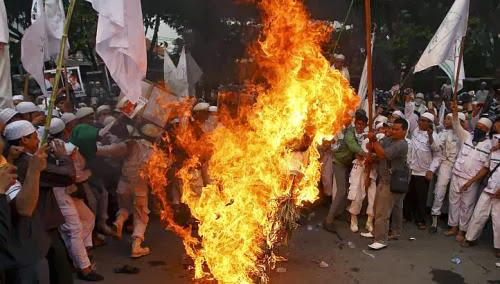 Ms. Eka shanti founded the pageant three years ago after losing her job as a TV news anchor for refusing to remove her headscarf. She says that the contest is really Islam’s answer to Miss World. The contestants taking part in this year's Miss Muslimah pageant, are between 18 and 27 years old and come from six Muslim countries, Indonesia, Bangladesh, Nigeria, Malaysia, Brunei and Iran. They have spent the last 10 days in activities ranging from Koran recitation, to vocational courses in IT and learning the art of wearing make up correctly. Ms. Eka says that they are all pious, smart, and stylish.

There were more than 500 contestants, who competed in online rounds to get to the Muslimah World final in Indonesia, one of the round was about comparing stories of how they came to wear the headscarf.

The 20 finalists, wearing headscarves, put on a glittering show for the final of Muslimah World, in front of an audience of mainly religious scholars and devout Muslims, strolling up and down a catwalk in elaborately embroidered dresses and stilettos. There was a riot of colours as they wore head scarves of different textures , gauzy, woven, satiny and colours, mauve, cerulean, and emerald green. The winner was awarded a cash prize in addition to a trip to Makkah and India.

Moral of story: the beauty shall always shine and razzle-dazzle , whether in a bikini or in an embroidered dress and a stiletto, whether in a hizab or without it.