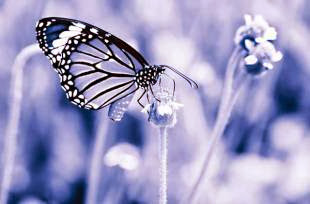 All of us must have caught butterflies in our kiddy days. I remember the extreme caution and delicate hands that are required to catch a beautiful butterfly, resting on a flower or on a branch of a plant. You have to tiptoe silently and take your hand slowly near it and then suddenly grip it. In 99% of the times, the sneaky guy would find you out and just fly away. Off course, those who are more serious about the hobby, usually use a fly net to catch them. But they are on serious butterfly hunts, which may last even days. In any case, I always thought that butterfly hunting was a leisurely and relaxed activity where the person on the butterfly catch mission is not particularly stressed or worried about his own safety.

Well! I have been just proved wrong. A 64 Year old, butterfly hunter Frenchman, Jerome Pages regularly hunts for butterflies in a beautiful countryside in Ayubia national park in Khyber Pakhtunkhwa province of Pakistan, that is also the beehive of Pakistan's deadly terrorist movement Taliban. Ayubia National Park is a protected area of 3,312 hectares (8,184 acres) located in Abbottabad District, Khyber Pakhtunkhwa province, northern Pakistan. It was declared a national park in 1984. Ayubia was named after the late Muhammad Ayub Khan (1958–1969), second President of Pakistan. The area supports temperate coniferous forest and temperate broadleaf and mixed forest ecoregion habitats, with an average elevation of 8,000 feet (2,400 m) above the sea level.

Jerome, who is a professor of statistics at an agricultural university in Rennes, northwest France, has been at this mission of catching butterflies for two decades. He has scoured the remote, pristine landscapes of Northern areas ( presently under Pakistan's control), where the Himalayas meet the Karakoram and Hindu Kush mountain ranges. Before turning to Pakistan, he had chased butterflies for years in Turkey. He tried to do so in Iran and Afghanistan but found Iran very difficult and Afghanistan impossible, so he turned to Pakistan in 1994 almost by default. He has been coming to Pakistan on his summer holidays and loves the terrain for its variety, from deserts to damp forests, and for the fact it remains unexplored by other collectors.

Jerome says that “In France, every species has been recorded for almost a century — there are no new butterflies any more, but in Pakistan there’s always the hope that somewhere off the track you might find something new.” He hit a jackpot in 2006 when he found a previously unknown species, with brown and ochre wings in the Swat Valley, which many describe as the Switzerland of Pakistan. He named the new butterfly as “Annieae” after his wife Annie and gave specimens to the British Museum in London and the Musee de l’Homme in Paris.

This year he found something new. Before he left for Pakistan this year, his wife bought some pungent, orange-skinned Maroilles Cheese, but it was starting to turn. Since it is believed that butterflies are attracted to rotting matter, Jerome thought that the cheese could prove to be the piece de resistance for the butterflies, who love decaying fruit. But the butterflies turned out to be real connoisseurs as they refused to touch the cheese and stuck to tried and tested fruit. The only effect the cheese had was on Jerome's local assistant Nasir, who was horrified with the very strange and very strong smell of this Cheese as he stood with a pinched nose. 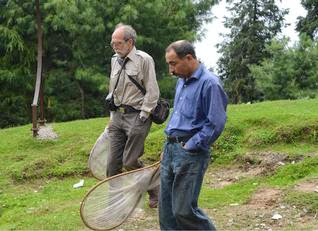 Only problem for Jerome as he wanders around in this region is that this is indeed a highly dangerous place. In June, Islamist gunmen killed 10 foreign climbers at a camp at the base of Nanga Parbat, the country’s second-highest peak. An army operation flushed out the terrorists in 2009, but insecurity in Swat, persists, preventing Jerome's return. In October 2012, Taliban gunmen shot a schoolgirl activist Malala Yousafzai in the main town of Swat.

So Jerome has been given Armed guards by Pakistan Government, who watch with bewildered eyes as this 64 year professsor goes on jumping and running around butterflies in Ayubia National Park.