Bracing for the acoustic torture 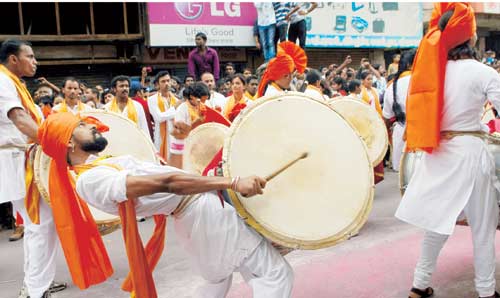 For next 10 days, people of Maharashtra state in India and many other places outside it, but within India, would be publicly celebrating a religious festival. In India, perhaps one meaning of word celebration is to try and generate maximum possible nerve shattering sounds all the time. The more the db level of the sound, higher is the enjoyment. This means that we in Maharashtra, would be subjected for next 10 days, to a new kind of human torture, the acoustic torture, and millions like me, are now bracing for the onslaught, because there is no other go. This acoustic torture of the masses is done in two ways with some specialized hi tech stuff. The first way is to build a super sized drum known as a “Dhol” in India. This drum is usually strapped on the chest of the drummer with leather or cotton fabric straps leaving his/her hands free, to have a go with all his might and hit the “Dhol.” The “Dhol” consists of a wooden barrel with animal hide or synthetic skin stretched over its open ends, covering them completely. These skins can be stretched or loosened with a tightening mechanism made up of either interwoven ropes, or nuts and bolts. Tightening or loosening the skins subtly alters the pitch of the drum sound. The stretched skin on one of the ends is thicker and produces a deep, low frequency (higher bass) sound and the other thinner one produces a higher frequency sound. The “Dhol” is played using two wooden sticks, usually made out of bamboo and cane wood, with tips of the sticks wrapped with cotton strips to create more bassy kind of explosive sound. 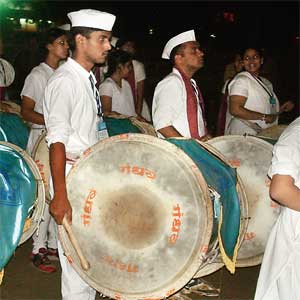 A “Dhol” was in the past, a battleground musical instrument. I have no idea how it has found its way in religious functions, where people are supposed to be in a pleasant and happy mood and not in a fierce or fighting mood. If you are standing anywhere in the vicinity of a “Dhol,” chances are that you would miss a heartbeat, every time the wooden stick falls and hammers on the side skin of the “Dhol.” For old people, young children and ailing persons, a “Dhol” playing nearby is a potentially disastrous situation. Creating mega sounds with the help of a “Dhol,” or many “Dhols,” is an essential part of the ritual to be followed in this 10 day festival. You can just imagine the havoc that would be created when say 5 or 10 “Dhol” players have a go, yet this is a very common experience for these days.

Yet the “Dhol,” with its deafening explosive sound, could be considered as a less of a torturous instrument, when compared with its new hi-tech counterpart, which produces mega sound with the help of electronics. Here, an acoustic amplifier that can generate few Kilowatts of audio power is usually connected to a wall of speakers all working in tandem. And the whole arrangement is connected to a CD player, playing mostly weird songs. The effect is simply mind staggering and gives you a feeling that acoustic membranes in your ears are about to burst any next moment. The sound here also travels through ground in some kind of ground waves, almost shattering everything around. I have always felt my heart beating a little faster every-time I listen to this and wanted to exit the place at earliest. Yet there are many unfortunate souls around, who have a speaker wall being played in the vicinity of there houses, from early morning to late midnight. Supreme court of India has banned playing such havoc causing instruments after 10 PM, yet the Government says that for 5 days out of 10, the tormentors can play it up to midnight. 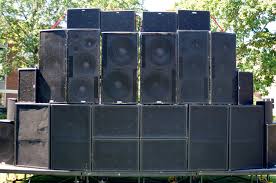 Last week, I happened to watch a phone-in programme, where people ask questions about matters that affect them. Someone asked about these torturous acoustic instruments and their effect on the young, elderly and sick. Accepting that it is not an exactly beneficial event for these, the person on TV had a strange argument. He said: “ After all this festival comes once in a year and many people enjoy it so the few, (meaning young, elderly and sick,) who do not like it, should bear with it.”

In Medieval Rome, they used to feed Christians to wild beasts openly in a Colosseum, with hundreds of thousands watching and enjoying it. How would you like the idea of Roman officials in charge of this gruesome event explaining it to the unfortunate victims, who were going to become shortly, a meal for the wild beasts, with same logic: “ After all this festival comes occasionally and thousands enjoy it , so few Christians, who may not like it, should bear with it.” (HaHa) !