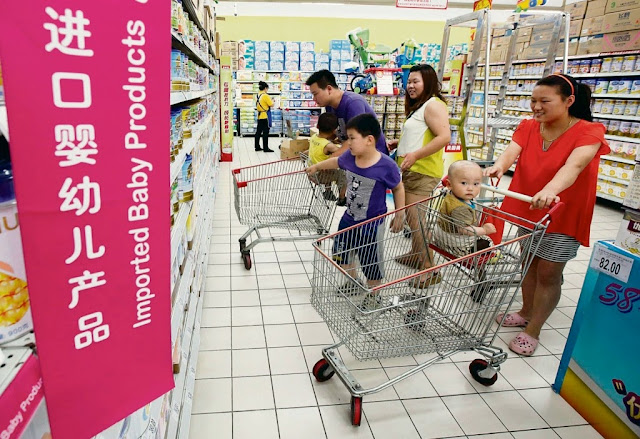 Tainted milk products are nothing new to Chinese consumers. In 2008, six infants died of severe kidney damage and an estimated 300,000 babies suffered painful kidney stones after drinking tainted baby formula. After testing, baby formula from several major Chinese dairy companies, was found to contain melamine, an additive that falsely boosts the protein levels in milk. Two Chinese companies, Mengniu and Ava Dairy recalled baby formula produced by them in December 2011 and July 2012, because it contained high amounts of aflatoxin, a carcinogen produced by fungus in cows' feed. Also in June 2012, another company, Yili Group, gave a recall for its main line of infant milk powder because of unusually high levels of mercury found in it.

As a result of this, mothers in China, have developed an unprecedented aversion to China made baby formula. Many young parents believe that food products stamped as "Made in China" are unsafe for children. Parents are fearful of the dangerous levels of hormones and chemicals sometimes found in Chinese baby formula and are ready to go to great lengths to secure foreign brands of baby formula. Chinese visitors to countries like Hong Kong, Australia and Great Britain started buying baby formula for their relatives and retailers in these countries were forced to impose rationing on number of baby formula tins, a person could buy. 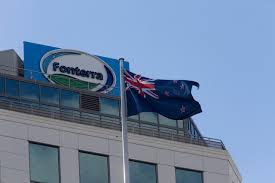 One of the biggest beneficiaries of this situation was a New Zealand dairy products company called Fonterra. New Zealand's dairy exports are considered as the gold standard as far as quality is concerned and are particularly popular in Asia. New Zealand’s dairy exports are worth more than NZ$12 billion ($9.7 billion) a year, according to government data, with China its largest market accounting for almost NZ$3.0 billion.

Fonterra had almost a near-monopoly of this market accounting to 89 percent of the country’s milk production, which stood at 15.4 billion liters in 2011. It came as a bolt from the blue, when Chinese food inspectors discovered in July 2013, that some latest batches of baby formula supplied by Fonterra were contaminated with a toxic bacteria called as Clostridium botulinum, which can cause botulism. The symptoms of botulism include nausea, vomiting and diarrhoea, followed by paralysis, and it can be fatal if not treated. On 31st July 2013, China’s General Administration of Quality Supervision, Inspection and Quarantine said it had ordered importers to withdraw any contaminated products and called on quarantine officials to step up inspections of dairy products imported from New Zealand. In an editorial, Chinese state news agency Xinhua blamed lax regulations in New Zealand for allowing the product to be exported.

The troubles had then just began for Fonterra. Xinhua editorial also pointed out that the problems with Fonterra were systemic, as Fonterra also part owned a Chinese company, which in 2008, illegally laced milk with the chemical melamine, resulting in six children dying and 300,000 falling sick. The company took up fire fighting measures immediately and revealed that three batches of whey product, which is used to make infant formula and sports drinks, have been found to contain the toxic bacteria. The statement was so cleverly worded that it only highlighted the quality concerns and did not say anything about the contamination of baby formula that could cause botulism until near the end of the document. 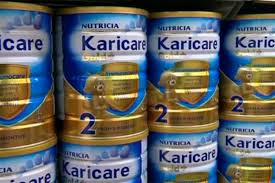 However the damage was done and after China, other countries also banned the products. The botulism scare dented New Zealand’s “clean, green” reputation, particularly in China, where Fonterra had a multi-billion dollar dairy market and was considered as a premium product.

By first week of August 2013, company said that they have recalled and cleared the tainted baby formula tins from all stores in New Zealand and are still trying to recall the stocks from other countries like China and Saudi Arabia.

Even before this fire was completely doused, another contamination scare has hit Fonterra. On 19th August 2013, it was found that a milk product called Lactoferrin manufactured by a Fonterra group company, 'Westlake Milk,' had excessive nitrate levels in the batches that were exported to China again. The two batches of Lactoferrin totalling about 390kg were exported despite showing nitrate levels of 610 and 2,198 parts per million, which was well above the New Zealand standard of 150 parts per million.

Company spokesman says that the contamination was an isolated incident caused when cleaning products were not properly flushed from a South Island processing plant before a new run of product was sent through and these batches of Lactoferrin did not pose a safety risk. The Government of New Zealand says by the time the product had been through the manufacturing process, nitrate levels would be so diluted as to be harmless.

Whatever may be the truth, the fact remains that the image of New Zealnd's dairy industry, which has been a gold star for this nation, has been severely mauled, and might take considerable time and effort to retrieve it back. Meanwhile, no one can blame young Chinese parents or in particular mothers, who have by now developed total aversion to 'made in China' baby formula, if they recall the famous phrase used by Shakespeare in his drama Julius Ceaser, “ You too, Brutus?” to address New Zealand, which was their trusted source of baby formula so far and its famed dairy products company Fonterra.