I am quite sure of the fact that no one would ever describe me as a traditionalist. I do not recollect, what I did during my formative years, but at least during last few decades at least, I have been considering myself as a confirmed non traditionalist. Though I am not an atheist, I do not adore or find solace in idol worshiping and in particular all those tradition bound rituals and ceremonies that are associated with it. But then why on earth, am I writing about my likes and attributes today? It all really started with a little discussion I had with my wife this morning.

When I found out this morning from the news papers, that the price of onions has reached 100 Rupees (US $ 1.90) a Kilogram in retail markets, I mentioned this to my wife and told her that we should cut down on Onions. Surprisingly, I also added that as per tradition, we are not supposed to consume onions at this time of the year after all. Now let me explain this!

In India, we have three seasons instead of usual two, that we observe in other parts of the world. Between peak of summer and on-set of winter, we get in India, what is known as a rainy season, say from beginning of June to end of September. The actual pattern of weather may differ from place to place, but at least on west coast belt, where I live, the rainy season means darkened skies, intermittent showers and in general a gloomy and dull kind of atmosphere. This is also the season why there are highest number of outbreaks of allergy based diereses and ailments like common cold and flue at this time of the year.

During this rainy season period, that extends to almost 4 months, traditions proscribe consumption of foods and spices like onions and garlic that are considered flatulent and odious. I quite remember my grand mother telling me this. However, I frankly do not think that this argument holds much water. There are many more foods in Indian diet like potatoes and tapioca that are even more flatulent. I wonder if there is some other reason for this custom to get established.

Indian onion growers usually harvest two onion crops each year. The crop that is harvested during March-April has a shelf life of about six months and can be stored till October-November. The other crop known as 'Kharif' crop arrives into the market by then. It so happens that this crop is perishable and can not be stored beyond few weeks. This means that whenever this second or Monsoon crop fails, there is scarcity and price rise, because the stocks of onions harvested in March-April deplete by months of August- September every year. 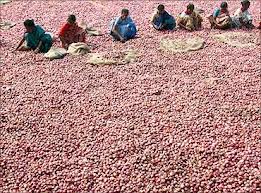 Last year, or in 2012, Monsoon rains have been extremely erratic and scanty over Indian peninsula. Even a layman could extrapolate from this that there would be a shortage of onions in the markets this year. As expected, the stock of summer onions depleted last year by October-November 2012 and as the new crop failed to arrive in the expected quantities to fill the gap, prices started soaring in November.. The average prices in the country's largest wholesale onion market at Lasalgaon in Nashik district, Maharashtra state, soared from Rs 1,0000 per metric Tonne to over Rs 23000 per metric Tonne within three months. It had a cascading effect on the retail prices in cities across the country. The situation came back to normalcy only when summer crop arrived in to the market. Since there was a continuing basic short fall in production, the stocks have already depleted by now and the prices have simple sky rocketed.

Leave aside current shortages, I can clearly see a pattern here. This situation must have been repeating for last hundreds of years, because crop harvesting in India remains essentially the same; totally dependent on Monsoon rains. Which in other words means, that consumers must have experienced onion prices touching the sky around months of August-September, whenever monsoon rainfall did fail previous year. We must also remember that in those days production and consumption of agricultural produce was restricted to more or less localized areas. 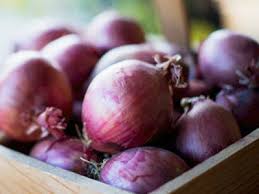 In Maharashtra state of India, there is a local saying, which says that a flat bread made from 'Jowar' (Sorghum, White Millet ) and an onion is a poor man's complete meal, effectively meaning that he can afford it, any time of the year. This can not be said to be true any more, now with the ruling sky-high onion prices. If we see the traditional proscription of onions in the months starting from July to October in this light, we can realize, how wise the idea was. If the consumption itself was low during these months, there was least likelihood for the onion prices to rise and the poor from the society could always buy this agricultural produce at any time of the year. “Viva la traditionalism!” Isn't it?

Since following such traditions is no longer practical and possible, what do we do? I am afraid not much can be done. We have two choices. Either we can stock up onions by June every year, when the prices are still low or give up eating onions during rainy season. Take up your pick.