They do it with blinkers! 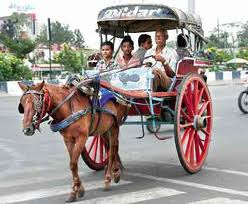 The only hired transport vehicle that was available in my home town, Pune, about sixty years ago, was a light single horse-drawn carriage, known as 'Tanga' or 'Tonga.' It used to have large spoked wheels with a seating capacity of three passengers. Many of the 'Tangas' used to be spic and span with polished and painted woodwork, leather seat covers etc. The horse driving the 'Tanga' would also have fanciful leather gear consisting of things like harness, reins and bridle worn on the body along with little bells and feather crowns. There used to be a special leather attachment to the bridle, which looked like leather flaps. These flaps were known as blinkers, blinders or winkers and they used to be positioned just by the side of the horse's eyes. These blinkers prevented the horse from seeing to the rear and also to the side. Once I asked a 'Tanga' owner the purpose of these blinkers. He told me that these ensured that the horses saw and kept focusing on what is in front of him, which prevents any headlong collisions or accidents on the roads.

As 'Tangas' disappeared from Pune's roads and were replaced by motorized auto rickshas, I forgot everything about the 'Tangas' their horses and the gear they wore. Today, after so many years, I suddenly remember these blinkers, once worn by horses, because a professor in a university in Thailand has picked up this old idea and has come out with a new headgear, specially made for students writing their examinations. 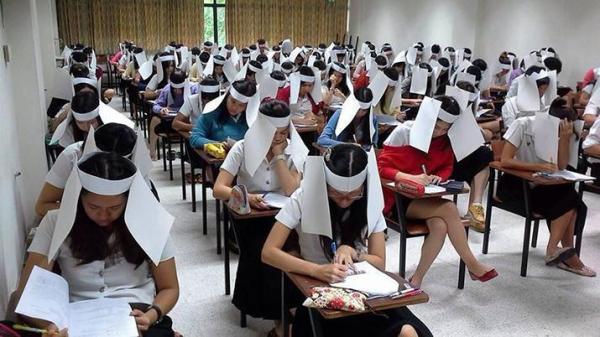 The idea came to the mind of Nattadon Rungruangkitkrai, a 40 year old professor at one of Bangkok’s most famous university, Kasetsart University, when he came across a report by an education expert who said that cheating was rife in the Thai education system and among wider society. Professor Rungruangkitkrai wanted to devise a fool proof method to prevent his small exam room to encourage plagiarism. He discussed the matter with his students and asked them, how to prevent cheating? His intention was to teach the students about ethics and as part of the lesson he had asked them to think creatively about prevention of cheating.

The students proposed many ideas like different sets of exam papers for every one and individual boxes for every one to sit. Finally they agreed to headsets made by using A-4 size paper blinders, which students said they had seen in other countries. About 90 students agreed to the use of the blinkers and to make the hats themselves on the exam day.

The bizzare headgear consisting of two A4 sheets of plain white writing paper attached by paperclips to a headband was used for the first time on Wednesday, 14th August 2013, by about 100 agro-industry faculty students of the university for a mid-term examination for a textile testing course. The students appearing for the examination apparently felt relaxed to use the headgear as it was fun, relaxation and humor for the students during examination. Professor says: “It is a trial idea agreed between me and the students and they liked it. Students actually gave feedback that the said the blinkers could release stress during the exam and help them concentrate.” 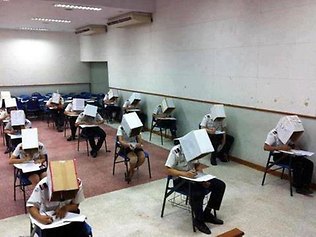 By Friday 16th August 2013, someone posted a photograph on Facebook, of the students sporting the blinkers, which they had made and had customized themselves. The photo later appeared on a web site, Coconuts Bangkok. Shortly thereafter, the post went viral as thousands of netizens commented and shared the photo. Few photographs of different headgear, ridiculing the idea also appeared on same web site. The Thai press and social media also joined in.

The controversy prompted the university to scrap the blinkers and the teacher behind the scheme toured various television studios to explain the unusual measure. The faculty dean, Asst Prof Tanaboon Sajjaanantakul of Bangkok's Kasetsart University, finally announced on 17th August 2013 that it has decided to end the use of its anti-cheating helmets. 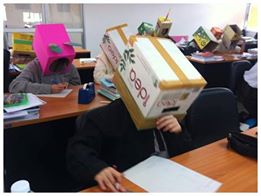 Professor Nattadon now says: “The students were excited and having fun. No one refused to make a hat. I admit that the ridicule in the media has been stressful, so we decided to stop using this method and will talk with students to find other more acceptable ways to prevent cheating.”

Essentially, basic idea of a paper helmet is quite good, though the implementation was bit odd and funny. I hope that this professor comes out with a better method to prevent plagiarism.