The Harappan pot of Gold 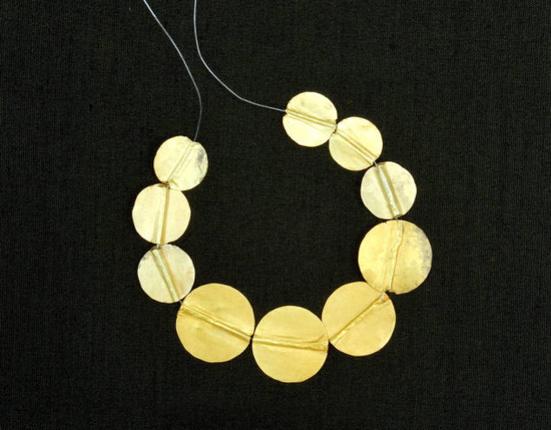 2nd January 2011, proved to be a golden day for the archaeologists excavating an ancient site in India's Gujarat state. A labourer digging in one of the trenches found two miniature earthen pots. He took them to the site supervisor Mr. S.Nandkumar, who took the pots to Mr. Jitendra Nath, Superintending Archaeologist, Excavation Branch. After examining the contents, Mr. Jitendra Nath, announced excitedly: “They are gold beads.” One of the pots contained 26 disc-shaped beads, micro beads and a ring, all made in gold, along with some steatite beads. What perhaps was most important, was that this gold was not just ordinary gold but it belonged to 4200 year old Harappan era of Indus civilization, 2565 to 2235 BCE. 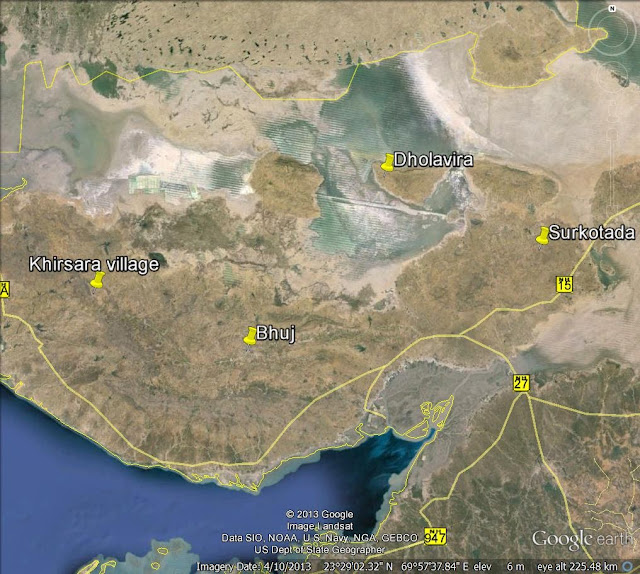 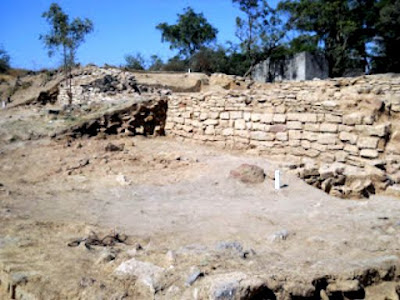 The site of 'Gadhawali Wadi' has been known as a Harappan site ever since 1970's. In fact, 'Indian Archaeology,' a publication published by Archaeological Survey of India (ASI) had reported in its 1976-77 issue some major findings at this site in these words.


(Frankly I can not understand this report, as a compass was invented in China, during the Han Dynasty between the 2nd century BC and 1st century AD. How a site which is believed to be 4200 year old (2565 to 2235 BCE,) can yield a compass is incomprehensible, but I would leave it at that.) 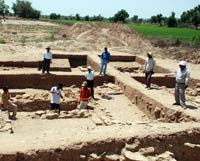 It appears however, that ASI renewed its interest in 'Gadhawali Wadi' after buoyed by tremendous success it achieved in excavations of 'Surkotada' (1970-72) and at 'Dholavira' between 1990 to 2005 and started a major excavation effort in December 2009 and continued it for next three years, digging up the site for over four or five months every year with a 100-member ASI team comprising archaeological experts and especially trained labourers. Their efforts were immediately rewarded. 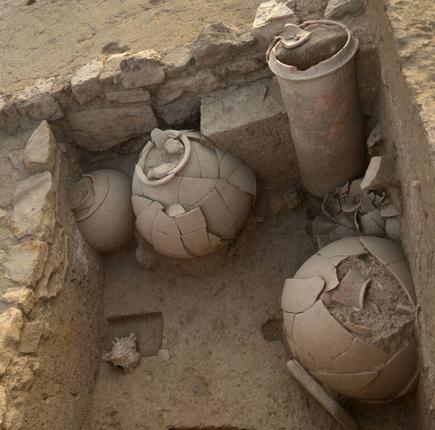 Mr. Jitendra Nath; Director of the excavation, recollects what he saw on one fine morning in April 2010: “ AS I stood on the edge of the trench and looked in, my eyes widened with amazement. In one corner stood a tall, slender jar with four perforations, two on either side, just below the rim. There were three beautifully crafted pots, wedged in the soil and, a few feet away, a big, upturned lid. Also on the trench floor lay a massive conch shell that looked like a bird with outstretched wings, as if it had been shot in flight and had fallen.” He was so much astonished that he told Kalyani Vaghela, the young research assistant in archaeology from the Maharaja Sayajirao University, Vadodara, Gujarat: “This is an important find. We have got so much of pottery in a small area within the trench. When we extend our excavation more, we will get an idea of why we are getting so many pots and jars in a small area,” 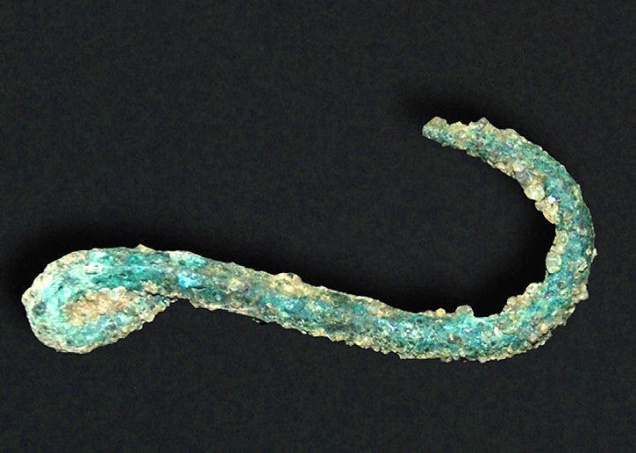 His prediction has come true. By December 6, 2012, thirty-nine trenches, each 10 metres by 10 metres in area were dug out. They have yielded a cornucopia of globular pots, sturdy storage jars, painted ware, perforated parts of broken jars, incense burners, dish-on-stand, goblets, beakers, basins, bowls, ladles, and so on. There was pottery everywhere. Besides the pottery they found rectangular seals depicting the unicorn and the bison and the Harappan characters, rectangular bar-type seals with only the letters of the Harappan script alone and circular seals proving that Khirsara site belonged to mature Harappan period. 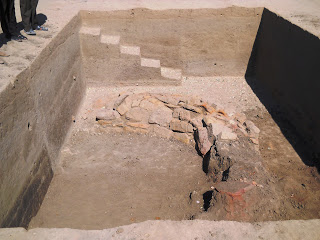 Khirsara site is not certainly as big as 'Dholavira.' The structural remains show that it was a fortified settlement consisting of a citadel with residential quarters, a warehouse, an industrial-cum-residential complex, habitation annexes and a potters’ kiln, revealing a systematic town planning. The ruling elite lived in the citadel complex, which had square and rectangular rooms, verandahs in front, a beautiful staircase leading upstairs, floors paved with multicoloured bricks and a rock-cut well. A five-metre paved lane separated the citadel from the factory. The citadel was deliberately built adjacent to the warehouse so that the rulers could keep a watch on the manufacturing and trading activities. The adjoining warehouse, 28 metres long and 12 metres wide, has a series of 14 massive parallel walls, which are more than 10 metres long and about 1.5 metres wide. All the structures are built of dressed sandstone blocks, set in mud mortar. In Khirsara, settlements have a general fortification wall around the settlement and also separate fortification walls around every complex inside the settlement. The citadel complex, the warehouse, the factory-cum-residential complex, and even the potters’ kiln have their own protective walls. This is something unique. 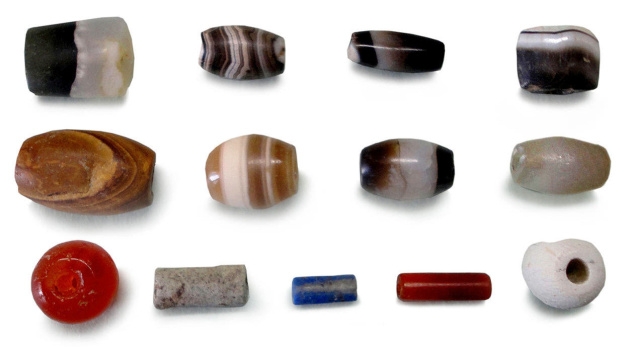 Khirsara excavations have revealed large number of artifacts and objects of daily use. Besides, disc-shaped gold beads, micro gold beads and their tubular counterparts, there are a variety of beads made of shell and steatite and of semi-precious stones such as lapis lazuli, agate, carnelian, chert, chalcedony and jasper. About 25,000 steatite beads were found in one trench alone. Shell bangles, shell inlays, copper bangles and rings were also found in plenty. Among copper implements were chisels, knives, needles, points, fish hooks, arrow-heads and weights. There were also bone tools, bone points and beads made out of bones.

It is clear from the finding of the antiquities, that Khirsara was a major industrial hub in western Kutch. Khirsara’s factory produced an amazing range of painted pottery, sturdy storage jars, globular pots, perforated jars, basins, dishes, bowls, beakers, dish-on-stand and incense burners. The painted pottery with occasional animal motifs, have geometric designs of broad bands, crosses, spirals, loops, arches and zigzags. Another feature is the profusion of miniature pots. 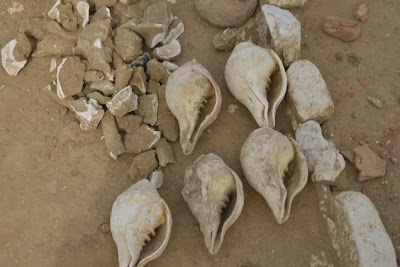 Khirsara was located on a trade route from other parts of Gujarat to Sind in present day Pakistan, which is about 100 km away. This means that the Harappans who lived here, were basically traders, manufacturing industrial goods for export to distant lands and to other Harappan sites in the vicinity and farther away.

Another special bonus from Khirsara. The findings of rectangular bar-type seals with only the letters of the Harappan script, opens a real possibility of trying to understand the Harappa script to a small extent.