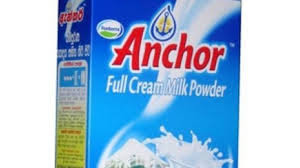 Like a super cyclone that goes on hitting and battering coasts of multiple countries, the tainted baby milk scam that has originated in New Zealand, has now hit South Asia after China. In an earlier blogpost, I had described, how a New Zealand dairy giant 'Fonterra' had found itself in deep trouble, when Chinese Government banned baby formula manufactured by it. As a result, Fonterra was forced to recall some of its products from the international market earlier this month.

Sri Lanka is a top-10 importer of New Zealand dairy products, with roughly $196 million of the country's total milk powder imports of around $300 million coming from New Zealand last year. The majority is supplied by Fonterra. In the beginning of this month, Sri Lanka’s Health Ministry said that tests performed by the government agency, Industrial Technology Institute confirmed that two batches of two Fonterra milk products showed traces of the agricultural chemical dicyandiamide, or DCD, and ordered a recall. Fonterra agreed and recalled the two batches. On August 15th, a report published by Government in Sri Lanka reported that an agricultural chemical was detected in Fonterra's milk powder. A local court order issued immediately after, ordered Fonterra to stop selling products, advertising or making public statements in Sri Lanka and issued a notification of a temporary injunction to that effect. The company had to close its office and local plants and asked its 755 local workers to stay at home. 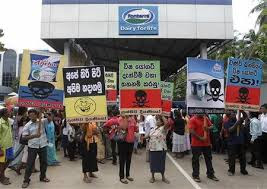 New Zealand has had a presence in the Sri Lankan dairy market for last 35 years and Fonterra has a major share of the pie. It collects milk from 4000 local farmers to process it. Sri Lanka buys every year, 2 per cent, of New Zealand's dairy exports worth about $260 million.

As happens in any crisis in a country where Government is elected by the people, political groups have rushed to take advantage of the situation. About 100 members of the National Freedom Front, a nationalist political party in President Mahinda Rajapaksa's ruling coalition, took advantage of the situation and demonstrated in front of the Fonterra dairy factory in the Colombo suburb of Biyagama. They displayed banners saying, "We should make our own milk powder", and "Ban toxic yoghurt advertisement immediately", while carrying a coffin with large pictures of all Fonterra brands. The farmers who own cows and supply milk to Fonterra form the main voter base of Sri Lankan President and Government actually wants to increase domestic dairy production and reduce the country's reliance on dairy imports. 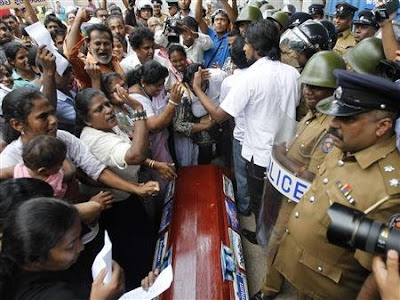 Fonterra came out with a statement on August 18th which said that independent testing had found no traces of dicyandiamide or DCD in any Fonterra-branded products in Sri Lanka. The New Zealand government stepped in and provided an assurance that future deliveries to Sri Lanka will be DCD-free. On August 23rd, A Sri Lankan court eventually ended a ban on the sale, distribution and advertising of all Fonterra milk products in Sri Lanka. Sri Lanka’s latest tests on New Zealand milk powder imports also shows that they were free of DCD, and the problem appears to have been defused.

However troubles appear to be far from over for Fonterra as Bangladesh authorities have this week restricted imports of powdered milk mostly from Fonterra. Officials from the port city of Chittagong say that customs officials are holding more than 600 tons of powdered milk mostly from Fonterra until mandatory chemical tests showed they were safe. Bangladesh commerce secretary says: “We have instructed the customs officials to restrict delivery of those consignments pending chemical tests, because this is a matter of public health.”

Things appear rather gloomy for New Zrealand dairy industry as one country after other, now even in south Asia, has started restricting the dairy imports, which constitute almost 25 percent of the country’s exports.