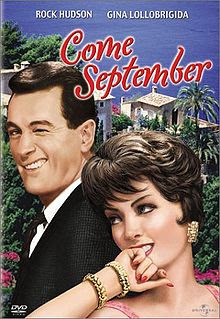 This week's long forgotten musical track is unique. As far as I know, this is an only musical single from Hollywood, that was ever played on Public address systems in India during marriages, religious functions along with hundreds of other Bollywood film songs and other music. Its catchy tune and simple beat probably made it so popular in 1960's.


By this time my readers from India must have already guessed it.. It is the theme from the 1961 Hollywood flick 'Come September.' A romantic comedy film directed by Robert Mulligan, and starring Rock Hudson, Gina Lollobrigida, Sandra Dee and Bobby Darin, who also composed the Come September theme.


You can also copy and paste the link http://youtu.be/nPBejX8XJVA in your You Tube App. If that also does not work, search You tube for Come September Bobby Darin.