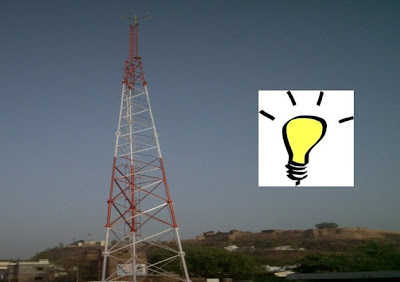 I remember a visit that I had made many years ago, to a high power radio transmitter of 'All India radio' used for transmitting medium wave band radio signals. The engineer, who took us around, had given us an interesting demonstration of the power that was being transmitted. He had connected a normal 230 V household use, incandescent bulb to a short loop of wire. When this wire loop- bulb arrangement was taken near the transmission tower, the bulb had lit up drawing electrical power from thin air, proving to us that high frequency electrical power can be transmitted through thin air without any cables.

Nikola Tesla, (1856- 1943) was a Croatia born (He was born to Serbian parents in the village of Smiljan, Austrian Empire,modern-day Croatia as per wikipedia) scientist and who had became a naturalized American citizen in 1891, had first thought of this concept. He is remembered for his work in the fields of high-voltage electricity and development of radio transmission where he made many discoveries and inventions of great value. The most well known of his inventions is a coil that can generate high frequency currents and a transformer, which boosted these alternating currents to a high voltages. This coil is actually named after him and is known as a Tesla coil. He also won fame for his victory over Thomas Edison in the well-publicized "battle of currents," where he proved that his alternating current was far more practical and safe than Edison-brand direct current. Soon his technology dominated the world's developing electrical infrastructure, and by 1900 he was widely regarded as America's greatest electrical engineer. 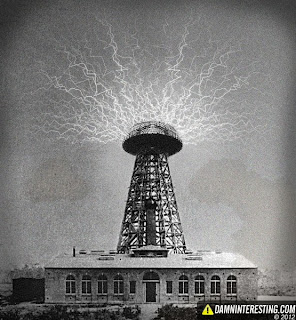 One of the pet projects of Nikola Tesla was the development of a system of transmitting electric power without wires, though the project never got completed because of lack of enough funds and obvious technical flaws and glitches. In 1905, a team of construction workers in the small village of Shoreham, New York, started work to erect a truly extraordinary structure. Over a period of several years, they had managed to assemble the framework and wiring for the 187-foot-tall 'Wardenclyffe Tower,' on top of which perched a fifty-five ton dome of conductive metals, and beneath it stretched an iron root system that penetrated more than 300 feet into the Earth's crust. Tesla wanted to make this tower a part of a chain of "magnifying transmitters" across the globe, saturating the planet with free electricity and wireless communication as early as the 1920s. According to his plans, towers like the one at Wardenclyffe, would send columns of raw energy skyward into the electricity-friendly ionosphere fifty miles up. To tap into this energy, all that the customers would require would be a relatively small spherical antenna on the roof of their homes along with a buried ground connection. Between these two, enough electrical power would be available for their domestic use. Tesla could never complete his tower and eventually it was dismantled. However concept of wireless transmission of electricity, has always remained as a topic of hot interest amongst researchers in this field.

Now, after more than 100 years since 'Wardenclyffe Tower' was being built, Korean engineers have brought to reality, first working model of an application that uses this concept successfully. They have now modified a 12km (7.5 miles) of road, that runs from the train station in the town of Gumi, in the south of the country, to the In-dong district, with electric cables installed under the road, that are used to generate electromagnetic fields of a frequency of 20000 Hz. (our normal power supply has a frequency of 50 or 60 Hz.) They have been able to generate up to 100 kW of electrical power which equates to 136 horsepower. These power cables or strips are needed to be placed under only under 5% to 15% of the road, which means that only certain sections are needed to be dug up and replaced. 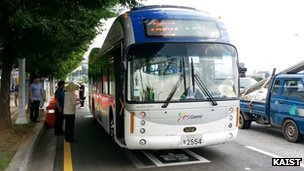 (Image BBC, may be copyrighted)

Special buses equipped with a device fitted to the bottom receive this high frequency power from the road using a technology called as 'Shaped Magnetic Field In Resonance.' Essentially this receiving equipment is a coil placed inside the device that picks up the high frequency electrical power from the cables under the road and then the device converts it into regular electric power of 50 Hz. The receiving equipment can be up to 17cm (6.7in) above the road's surface.

(Image BBC, may be copyrighted)

Two public buses are already equipped using the technology and are successfully running on this road. There are plans to add 10 more by 2015. Dong-Ho Cho, who led the team behind the scheme at Korea Advanced Institute of Science and Technology (KAIST) says: "It's quite remarkable that we succeeded with the OLEV [online electric vehicle] project so that buses are offering public transportation services to passengers, This is certainly a turning point for OLEV to become more commercialised and widely accepted for mass transportation." He adds that because vehicles do not need to stock up on energy before making their journey, the batteries involved can be three times smaller than would otherwise be needed. This reduces the weight of the vehicles helping reduce the amount of carbon dioxide emitted when generating the power required.

No doubt that this OLEV project is a technology demonstrator and proves that there is clearly a lot of potential for this technology for public transport applications, but for private electric vehicles the cost of fitting all roads with such systems may be prohibitive.

The project also needs to prove that it is safe for common use. What happens if there is rain or snow? If bus passengers have any thin metallic object like a needle in their hands or a metal strap around their bags, would it give them an electric shock? These are some of the common concerns that would have to be addressed.

There is however no doubt in my mind that it is a break through, which after further development, can usher in a new era where all public transport buses can run on wireless transmission of energy. A great job done by Koreans without any doubt!