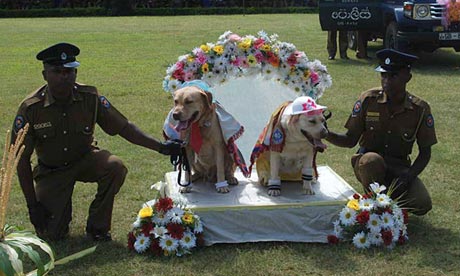 This bit of news is just unbelievable. I would have thought it to be somebody's flight of fancy, if there were no photographs that came with the news. I think that after reading this, everyone would agree that in Sri Lanka's police force, there are guys, who appear not particularly well endowed with brain gray matter. If any one feels I am exaggerating, here is what happened.

Sri Lankan police actually married off in the town of Kandy, nine pairs of dogs on a platform decorated with white cloth and flowers in a ceremony resembling a traditional marriage. The Nine pairs of police dogs were dressed in shawls, hats and socks and their marriages were registered by an official in the presence of vets, doctors, senior police officers and the public. The "brides" wore mittens, shawls and hats, while the "grooms" wore red ties. Police Constables served milk rice and cake to about 1,000 guests at the specially decorated venue, where the ceremony was held. As shown on the local television, these newly wed dog couples were then driven off by police van to the hill resort of Nuwara Eliya for their "honeymoon." The ceremony no wonder attracted wide publicity. 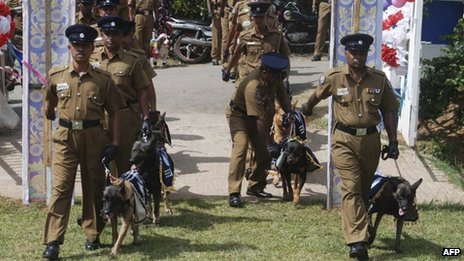 However not everyone in Sri Lanka was amused. Sri Lanka's minister for the culture and arts, TB Ekananayake, condemned this event with a strong worded statement. He said: "We are people, who really value out traditional weddings - which are only done at auspicious times alongside the chanting of stanzas and [other] poruwa rituals. The police have demeaned all this by conducting this in the Kandy - the city of the [famous Buddhist) Temple of [the] Tooth. I totally condemn this. Such an incident had never happened before in Sri Lanka and I have written to the the inspector-general of police asking him to conduct a full inquiry.”

TB Ekanayake has been particularly unhappy because that police officers have "contemptibly devalued" traditional weddings in a devoutly Buddhist country. He says that he was incensed that the dog couples were placed on a Buddhist poruwa - a stage used in traditional Sinhalese weddings.

Next day, Sri Lankan police apologised for holding a group wedding ceremony for sniffer dogs. Police spokesman Buddhika Siriwardena apologised for any damage to the country's cultural heritage and said that their goal was to breed sniffer dogs domestically, because in 2011 the police department spent more than 70m Rupees or US$ 526,000, importing sniffer dogs from the Netherlands. Police spokesman says: "This programme is aimed at breeding dogs, accustomed to local weather and food, thereby saving money."

No one can question about the validity of the sniffer dog breeding programme in Sri Lanka, but about the marriage ceremony, only thing that I can add is that really there is no shortage of dimwits in the world.