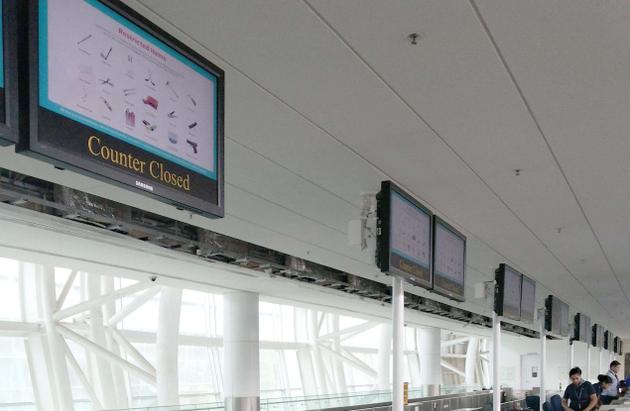 Chennai airport's new terminal building has been dogged with problems ever since the new terminal was opened on January 31st 2013. I had an occasion to pass through the spanking new terminal in April 2013 and again in July 2013 on my way and back from Singapore. On both these occasions, I had totally different experiences, some pleasant, some not so pleasant. I have already written, two blog posts about the new Chennai airport, which readers can find on this link as well as on this link. I had thought then, that as things get normalised, the airport woes would be streamlined and there may not be another occasion to write about the airport again. But I was sadly mistaken. The troubles at the airport continue and even pose a danger to the passengers.

Let us first see the course of events. On 18th April 2013 Leaking air-conditioning ducts were first reported. This was followed by complaints from passengers about pigeon droppings inside new domestic terminal. On 3rd May, over 10 glass panels in the terminal were found cracked, which were later replaced and finally on 13th May, false ceiling panels inside new domestic terminal fell down.

Now in the latest mishap, twenty-three panels of the false ceiling in the departure hall of the new domestic terminal, came crashing down on Saturday-Sunday night, 11th August 2013 at about 12.50 AM. This is the second such incident in the four months, as there was similar instance on 3rd May near the security hold area of the terminal, since the new terminal was commissioned. The false ceiling panels, made from gypsum and installed behind the Air India, IndiGo and GoAir check-in counters, in the east wing crashed down. Fortunately no domestic flight operations were underway at that time and hence there were no injuries. Airport maintenance staff cleared the debris by 3 AM.

As in the two previous instances, the airport management has issued statements explaining technical reasons for the collapse. It now says that due to heavy condensation, the gypsum board located near the air conditioning diffusers had absorbed a lot of moisture and the panels had come loose of the screws and fallen. An airport official added: added. “We didn’t quite foresee this problem as false ceilings near diffusers are common. This incident may have occurred because the building is made of glass and steel which emit a lot of heat and induce such a problem.”

Airports Authority of India (AAI) officials give a clean chit to the quality of the false ceiling material manufactured and supplied by Armstrong Ceilings India Ltd. The airport officials are clearly puzzled as can be seen from their statements. They say: “We, certainly, don’t have defective material; it is of good quality. We are now trying to find out how to reduce the condensation process. The problem is also not with the temperature of about 22-24 degree centigrade that we maintain inside the terminal.”

Airport director meanwhile has issued a statement that says: “We will soon begin repair works and replace these false ceiling areas with lighter, non-moisture absorbing material such as aluminum metal strips or calcium silicate ceiling board. We have already identified the vulnerable spots. This will be done for both the new domestic and international terminal as we don’t want to face such problems in the international terminal.”

All these explanations and counter explanations really show that airport staff really does not know what is happening? Chennai is known to have heavy moisture content in the air as it is a port city with hot and humid weather. One does not know whether all these factors were taken into consideration or not when the design for the new terminal building was made.