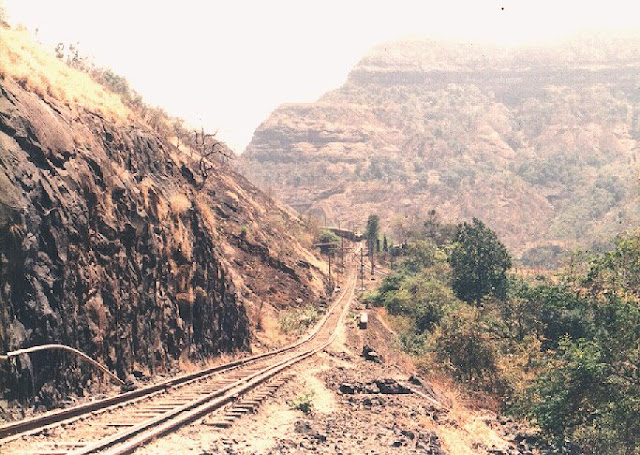 Around the year 1856, railway tracks were laid for the first time, to connect my home town Pune, which was a garrison town then, to the British stronghold on west coast of India and now commercial capital of India; Mumbai. This railway line crossed the 'Sahyadri' or the western ghat mountain range between two stations; 'Khandala' on the hill top and 'Karjat' at the foot, almost at sea level.

In the early days, though there were number of smaller tunnels, a tunnel through a huge mountain obstacle, that stood in the way, was not thought feasible. Railway engineers had then devised an ingenious arrangement, known as reversing station. This station was located on the tracks after a bridge with a dead end. The train would cross this bridge and would stop at the station. Then it would just reverse it's direction of travel and join a separate track that bypassed the huge mountain. Sometime later, railways managed to build a long tunnel through this mountain and then reversing bridge was no longer required. However, this bridge can still be seen even now, when one travels by train from Pune to Mumbai and is an amazing sight.

This entire mountain section, through which the train passes, is endowed with stunning natural beauty, more so during monsoon months. Dense tropical forests, lush green meadows and mountain peaks, make it a natural adventure spot for youth. I have been to this area many a times during monsoons, to enjoy the nature. While roaming around the area, I would often see railway tracks, that were not part of the main Pune -Mumbai line, but were sort of offshoots from it. These tracks usually disappeared deep into jungles. Once on a picnic with some of my friends, we decided to investigate, where these train tracks actually go? We walked along the tracks, which were surprisingly not rusted but actually well maintained, for more than a mile in the deep jungles. Later we found out that the track started climbing a steep slope on a mountain side and further up, the track just stopped. There were buffers provided at the end to stop a train moving on the track. These buffers were surprisingly well entrenched and supported in thick platforms built out of stone. We could not understand why and for what purpose these tracks were laid and gave up.

Much later, I realized that these tracks were actually built to stop a runaway train, with failed brakes and in railway terminology are called catch sidings. All trains on this mountain section, follow a strict regime, under which they come to a dead stop at two designated places on this steep sloping terrain. The trains are required to stand still there for couple of minutes to test whether their brakes are functioning properly or not. If a train does not come to a full stop, the points and signal men simply would let it roll on to the catch siding track going up on a steep incline, where the train would come to stop on its own because of the steep climb. This is no doubt a very simple yet effective method of ensuring safety during descent or ascent in the steep mountain terrain. This stop and proceed regime, is followed even today for each and every train crossing this mountain section. 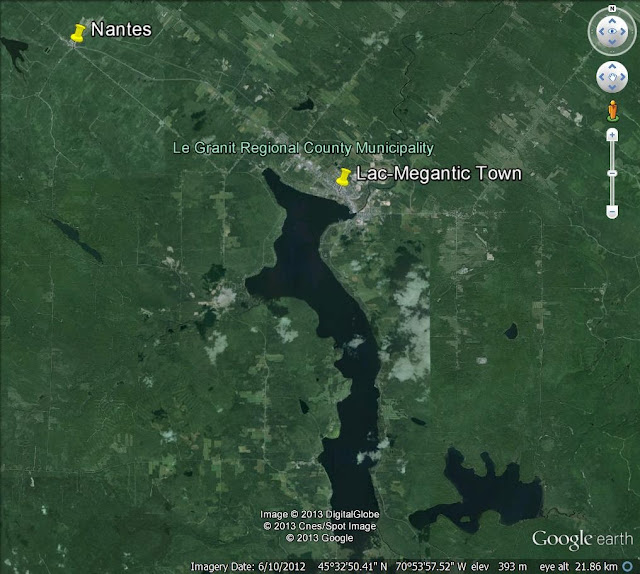 I am very much reminded of these runaway train catch sidings near 'Khandala' town today, after having read about the havoc caused by a runaway train in Quebec region of Canada and the devastation it has caused to a town. This sad incident happened last weekend, near the scenic lakeside town of Lac-Megantic, nestled in a dark pine and birch forest in Quebec, on a short length of sloping track, where the freight trains, hauling crude oil and other raw materials across North America, regularly take an overnight stop.

Before retiring for the night, the train operators normally set here, the hand brakes and leave one locomotive running to power the air brakes that help hold the train in place on the gently sloping track ahead. The next morning, the operator or a relief engineer again starts up the train and continues on his way.

On 6th July 2013, this system failed, as the locomotive that was parked running for the night, caught fire. According to the chairman of the railway company operating the railway line, The Montreal, Maine & Atlantic Railway (MMA), one of the an experienced Canadian engineer of the company had parked the train in the small town of Nantes at a siding, on a short length of track, where trains make overnight stops. The siding is about 7 miles from town of Lac-Megantic. He had secured the train at 11:25 p.m. setting the air brakes and hand brakes, on all five locomotives at the front of the train, as well as brakes on a number of cars, in line with company policy. Four of the train’s engines were switched off, but the front locomotive was left on to power the air brakes. The engineer, had then retired to a hotel in Lac-Megantic.

Within minutes, things started going wrong. Nantes fire department got a call about a blaze on one of the locomotives at 11:30 PM, fire likely caused by a broken fuel or oil line. The Firefighters reached the scene within seven minutes and found a good sized fire, but contained in the motor of the train. They put off the fire by 12.12 PM and as per their own protocols, also switched off the locomotive.

Without any effective braking system, the train started moving gently on the sloping track, gathering speed. A person, who has his wooden cabin near the track, heard a train moving and saw that it had no lights and thought it was an electrical problem on board. The train however picked up speed quickly and crossed the speed limit of 10 miles per hour (16 km per hour) as it reached a curve in the track in the very center of Lac-Megantic town around 1:15 AM and jumped the tracks. The Locomotives separated from the buffer car – a heavy railcar loaded with stones or rocks or sand – and the tanker cars, which were laden with a free-flowing mineral oil. There were five or six explosions. The crude caught on fire, spread through the storm drains and spilled into the deep blue lake. As crude oil from 72 rail cars rolled downhill into the scenic lakeside town of Lac-Megantic, there was wide spread fire and devastation that killed at least 13 people and 37 are still missing. 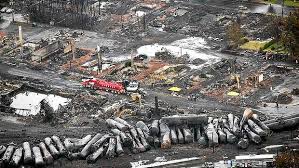 This disaster really brings out the importance of a catch siding for a train standing on a slope, as is provided in the mountain section of railway tracks near my home town. Only if they had one such catch siding near Lac-Megantic town, a major disaster could have been averted.