Olives from a desert 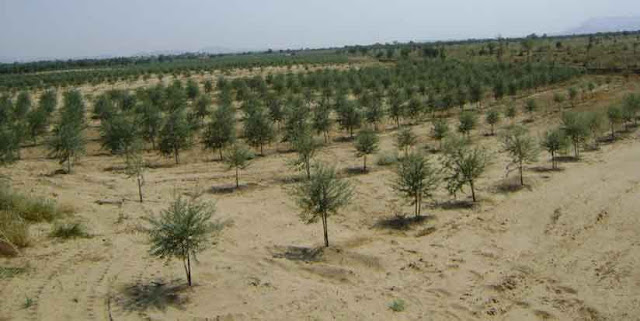 Whenever I go to a grocery store for buying my monthly or weekly requirement of Groceries, there is one shelf of merchandise, which I usually try and avoid. This shelf actually contains bottles and small cans of various sizes and shapes starting from 100 or 200 cc cans to 2 liter or even 5 liter bottles or cans. All these contain just one product; virgin or extra virgin olive oil. In addition, there are few bottles that contain Olive Pomace oil, which is usually the oil that is extracted from the leftover olive pulp after first crush. The reason for my avoiding this shelf is the exorbitant cost of olive oil in India. Olive oil is totally imported into India as there is no local production and a bottle of extra virgin oil may cost around INR 750/- or US $ 12. That is why, I think it is prudent to avoid this and if I have to buy it for any specific purpose, I would buy most reluctantly a 200 gram can at the most.It is therefore no wonder, that I was pleasantly surprised, when I came across a write up about a company set up by the Government of Indian state of Rajasthan, known as Rajasthan Olive Cultivation Ltd, which has taken up Olive cultivation in a big way and first batch of olive oil extracted from India grown olives should reach the markets in India by September 2013. Rajasthan state is known as a dusty state with desert like conditions. India's Great Thar desert is located in the state. The weather is dry and rainfall is scanty. Yet, after a visit of teams of farmers and agriculture experts to Israel, which has taken up olive oil production in big way, to study technical feasibility and economic viability of the Olive cultivation in Rajasthan, it was found that the same arid weather of Rajasthan might turn out to be ideal one for Olive oil plantations. A pilot project on Olive cultivation was conceived after the visit and eventually after studying and reviewing the recommendations of the expert teams, the Government of Rajasthan decided to promote the Olive cultivation under public-private partnership in the state. 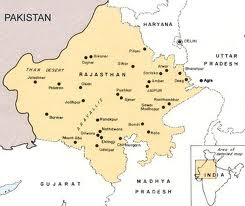 Rajasthan Olive Cultivation Limited was incorporated on 19.4.2007 as a company in collaboration with the Government of Rajasthan through Rajasthan State Agriculture Marketing Board, Plastro Plasson Industries (India) Limited (now Finolex Plasson Industries (India) Limited), Pune & Indolive Limited of Israel having equal partnership. This company undertook Olive plantation on 182 Hectares (450 Acres) on Government farms in different agro-climatic regions of the state. A company representative, talking about current status, says that since 2008, more than 144,000 olive trees have been planted on almost 260 hectares (642 acres) of government and private land in the state, which, with its long, dry summers and short, cool winters, offers the perfect conditions for growing olives. The company plans to cover 5,000 hectares with olive plantations over the next three years. 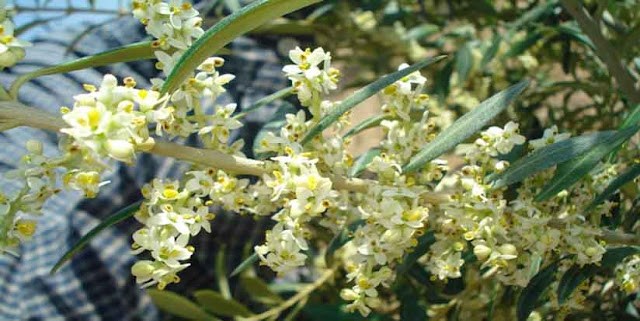 Since no farmer in Rajasthan had even seen before an olive in his life time, to convince and induce them to olive cultivation, was no easy task. But slowly some farmers who grew only wheat and cotton, which require a lot of water, decided to plant olive trees. Saplings of high-yielding olives just an inch in size were brought from Israel and grown to a height of 1.5 meters in company nurseries and then transplanted to the fields.. The plants will be irrigated by drip irrigation technology, where the roots are watered directly and nutrients added along with it. This method saves 40% more water than the older method and has been the reason behind the high yield of 2.8 tonnes of olive per hectare in Israel, which they hope to duplicate in Rajasthan. Each olive tree costs 130 rupees ($2.19) to plant, but farmers pay just 28 rupees or slightly less than US 50 cents as Government gives a subsidy. In addition, 90% of the cost for this irrigation system, is borne by the farmers. The olive trees have been planted in rows which are 7 meters apart, to enable groundnut cultivation in between the rows. This would help the farmers to start earning, even before the olive trees begin to bear fruit. Olive trees take 3 and a half years to bear fruit and then they keep producing them for a long time. 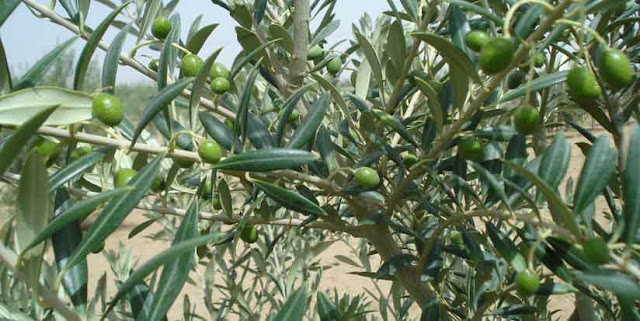 The Government is also setting up a sophisticated refinery using machinery from Italy to press olive oil in Rajasthan. It is expected that about 25 tonnes will be pressed this year from September onwards, and the plan is to tap into the rising demand in the domestic market.

Olive oil is well known for its health properties and extensively used for cooking in the Mediterranean countries. In India, it is mainly used in massage, facials and other beauty treatments. In India, the use of olive oil as a cooking medium is not widely prevalent and restricted to the miniscule minority of the affluent classes, who can afford the exorbitant price of the imported commodity. If Rajasthan olive oil becomes a successful commercial reality, I am sure that demand for the oil would increase by leaps and bounds. Today, Spain is the world's biggest producer of olive oil and accounted for around 50% of total production worldwide. If price of locally produced olive oil is reasonably priced, many Indians would switch over to it for their cooking requirements.

However if the company prices its oils in the same price range as imported Spanish oils, I am afraid that they would have to find only export markets for their oils.