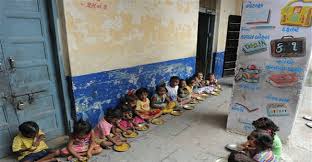 Whenever I go to buy groceries, my list invariably includes some toiletries and household cleaning stuff along with the food items. While bringing back the purchases, I take a simple precaution, which all the readers also must also be following. I pack all the toiletries and cleaning stuff in a separate bag and see that these are not mixed with the food items. This precaution is to ensure that the traces of cleaning stuff, which usually comprise of some poisonous material or other, under no circumstances get mixed up with food. This precaution is so basic that I stand aghast and feel horrified to learn that a school headmistress of a school in Dharmashati Gandaman village of Saran district from Bihar state of India, who is supposed to be an educated person, would ever store bags of fertilisers and pesticides, next to bags of potato, rice and cooking oil, meant for cooking free meals to children in her school, in her own house.

Consequences have turned out to be absolutely disastrous and a calamity as 27 of the young children, who had consumed cooked food prepared from the raw materials, stored in Headmistress's house, have died a terrible death due to food poisoning. Police are yet to ascertain whether food adulteration was of food or the cooking oil and whether it was accidental or a deliberate criminal act of poisoning, as alleged by some people, after initial tests showed traces of insecticide. 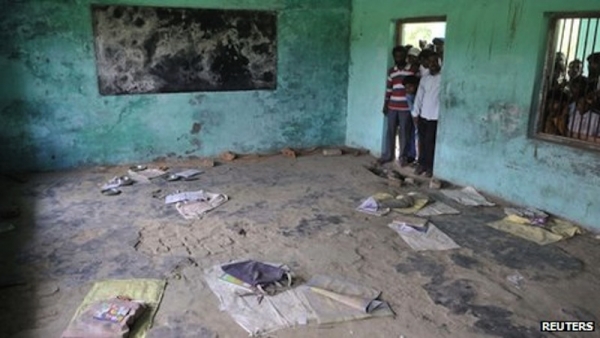 The primary school, runs in a 20x15ft room, which also serves as a community hall for weddings in the village. Midday meals were cooked in the small veranda by a cooks designated as 'sevika,' Pano Devi and Manju Devi. On that fateful day, Pano did not report for duty and a meal of rice and soya curry was cooked by Manju. She and her two children also ate the meal and fell sick. It appears that the cook had informed the principal that the mustard oil given to her by the headmistress to make soya curry, had a foul smell. Things however are more complicated as the food stuff was supplied by Headmistress Meena Kumari's husband Arjun Rai who runs a store in the village. The food poisoning was so severe that one of the victims had died within minutes of eating the lunch.

In a natural reaction angry villagers have turned violent and have ransacked the Headmistress Meena Kumari's house and other Government offices. Headmistress and her Husband are both absconding. Villagers have been demanding death for them.

Where do we go from here? The law would take its own course and the culprits would be surely punished and brought to justice. The heart breaking loss these 27 families have suffered is impossible to reconcile without any doubt. There has been much debate in the media about India's midday meal scheme itself, which is world’s largest school feeding programme involving 120 million children. 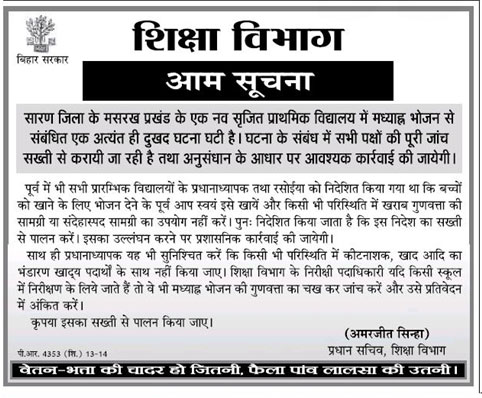 Secretary of an institution, which runs a number of Pre-Primary and Primary schools withing city boundaries of my home town Pune, is a relative of mine. After this disastrous event, I asked her about the midday meal scheme as it is organized in Pune city for Primary level students. This is what she had to say.

The food stuffs are purchased by the administration of the District itself directly. However Principals or headmistresses of the beneficiary schools have the right to inspect quality of food grains. Cooking area, utensils, cooking and serving staff are all centralized and controlled by district administration again. School have right here again to check quality of cooked meals. Usually one or two teachers would always taste the meals for taste and spiciness before serving staff serves the food to the children.

Schools are basically accountable for keeping tab on number of meals served and whether children were given food (Quantity of rice) as per Government rules. This seemed to me a fair arrangement because centralized cooking can be controlled very effectively.

However, I do not really know, what happens in small towns and villages, where local politicians are in a position to make a quick buck by bending some rules. Midday meal scheme, everyone connected with it agrees is extremely beneficial to children. Many poor children of India, have started attending schools because they get a square meal. The primary school attendance has grown by many folds, since this scheme has been started.

Just because one Meena Kumari and her husband, have singlehandedly managed to cause this irreconcilable tragic loss either with their utter negligence or with a criminal intent, I feel that 120 Million primary school children of India should not be deprived of one square meal, which some of them may find hard to get otherwise. Midday meal scheme should continue without any doubt, but with many more and tighter controls and with full transparency so that any parent or media representative can assure himself, about quality and purity of food stuffs purchased and how the meals are prepared, distributed and served.