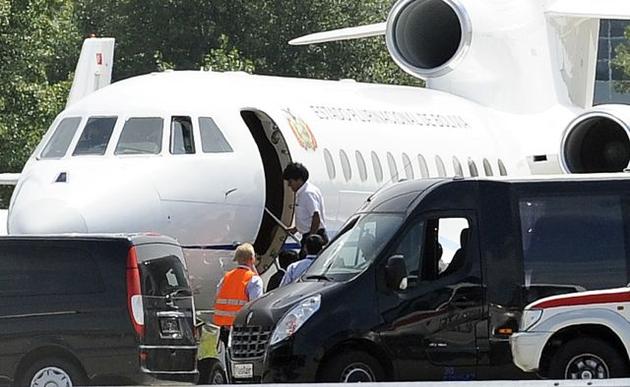 Wikipedia defines Paranoia as a thought process believed to be heavily influenced by anxiety or fear, often to the point of irrationality and delusion. Paranoid thinking typically includes persecutory beliefs, or beliefs of conspiracy concerning a perceived threat towards oneself. (e.g. "Everyone is out to get me.") An interesting example of this was demonstrated by number of European Governments, who felt mortally scared of getting hit by an imaginary fear known as the Snow(den) storm and subsequent wrath of US Government.

It all started when a a meeting of producer-countries of natural gas, wound up in Moscow on 2ndJuly 2013 and heads of states attending the meeting, started to leave Russia by their private aircraft. One amongst these, was the President of Bolivia, Evo Morales, who left Moscow by his private aircraft to head back home in Latin America. As his aircraft crossed Russian airspace and entered European airspace, he had a shock of his life, when one country after another, started refusing him permission to overfly. France, Italy and Portugal refused to let his private jet overfly and finally he landed in Vienna for emergency refuelling, as the plane did not have enough fuel for the new route that would avoid overflying airspace of European countries. Austrian authorities refused permission for the presidential aircraft to take off and searched the aircraft as it stood on the tarmac, for some 13 hours, and found nothing. The President called it “a 13-hour kidnap.”

Readers are bound to wonder, just like me, as to what was all this commotion or “Halla Bol” for? Why did so many countries pressed the panic buttons simultaneously? It appears that earlier on 2nd July 2013, Evo Morales had used a television interview in Moscow to hint strongly that Bolivia would look favourably on an asylum request from American whistle-blower Edward Snowden. After this comment, when Bolivian President's aircraft wanted to enter European airspace, France, Italy and Portugal evidently feared that Mr. Snowden would have boarded the presidential aircraft and might ask for a political asylum upon touching down on European soil. It would have been difficult for a European Union country to refuse Mr. Snowden political asylum, because the death penalty remains legal in the U.S. and all European countries would be virtually obliged to grant asylum to a person who faced the death penalty back home. Worried of Washington’s ire, they therefore decided to deny permission for the Presidential aircraft to overfly. 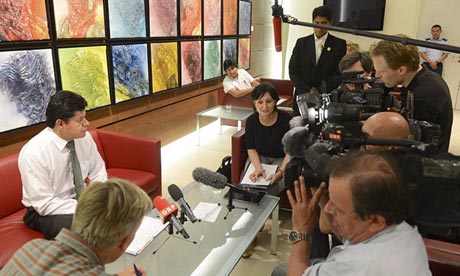 When news of this denial of permission and hold up in Austria broke out, Bolivians fumed and reacted with fury at this insult and disrespect shown to their president. In a midnight press conference, Bolivian vice-president Alvaro Garcia said that Italy and Spain had also denied the plane permission to fly through their airspace. He said; "President was kidnapped by imperialism in Europe.” The Bolivian foreign minister, David Choquehuanca, said: "We don't know who invented this lie. We want to denounce to the international community this injustice with the plane of President Evo Morales." Bolivian defense minister, who was on board said; "This is a hostile act by the United States state department which has used various European governments."

Evo Morales finally left Vienna at around 11.30am local time on 3rd June after spending 12 hours at the airport.

After realizing that they have created a faux pas situation, Europoean government immediately went into fire fighting mode. The Austrian president, Heinz Fischer, visited Evo Morales at the airport in the early hours of 3rd June and assured him that the plane had been cleared to leave. He said later, "The flight route is normal, as far as I am informed. Spain's airspace is also open for him. President Evo Morales will resume his trip shortly." Justifying Austria's actions he said, "our procedures here in Vienna were all correct."

There was anger in Bolivia with many citizens afraid that their President's life was put in danger. In a typical anti US stand, Bolivia said that rumours about Mr. Snowden being on board the aircraft were floated by U.S. agents in order to put pressure on Bolivia and these European countries were manipulated by a foreign power, namely the USA. Dozens of people demonstrated outside the French Embassy in La Paz, the Bolivian capital.