Celebrating a Birthday with Bullets 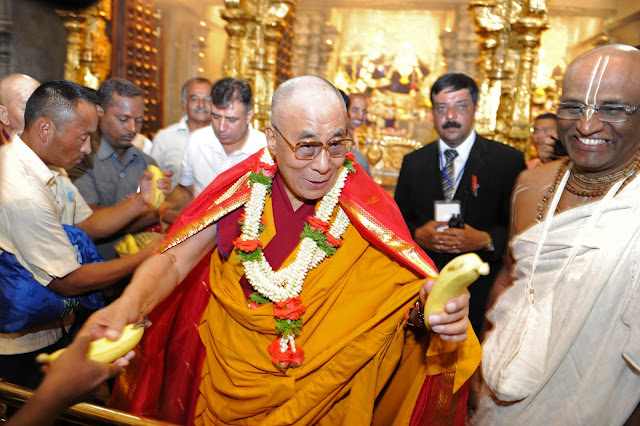 Amnye Machen is a 6282 meter high peak in the Amdo region of Tibet, forming a part of massif known as the Machen Kangri mountains. Amdo region is considered as one of the three main lands of Tibetans and is located in the northeast corner of the Tibetan Plateau. Amdo is home to approximately 25% of the total Tibetan population and consists of parts of 3 Chinese provinces: northern and eastern Qinghai, southwest Gansu and northern Sichuan. The massif of Amnye Machen is considered as Amdo's most sacred mountain and Tibetan's believe it to be the home to the protector deity Machen Pomra. This holy and mysterious mountain is probably as sacred and important to eastern Tibetans as Mount Kailash is to the western Tibetans. The water of the glacial streams from Amnye form the headwaters of the famous "Yellow River" of China. 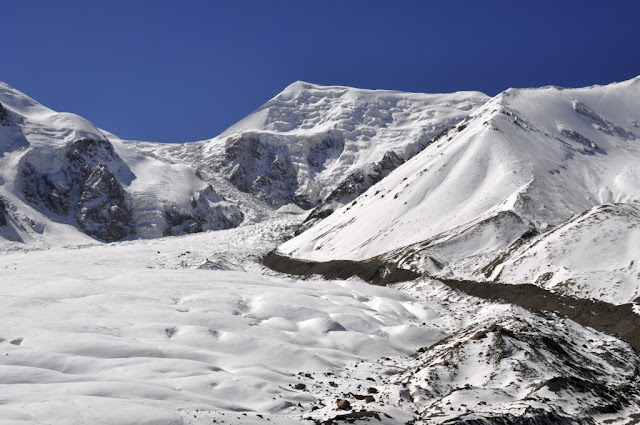 The nomads living in this mountainous region are known as Golok nomads and for them Amnye Pomra massif is an important pilgrimage destination. Tibetan pilgrims travel for weeks to circumnavigate the peak known as “Kora.” The circuit’s sacred geography and stunning wild mountain scenery, makes it a fantastic, though adventurous, trekking destination. There are number of monasteries alongside the circuit, including Guri Gompa near Xiàdàwǔ and Chörten Kharpo (White Stupa) at Chuwarna. 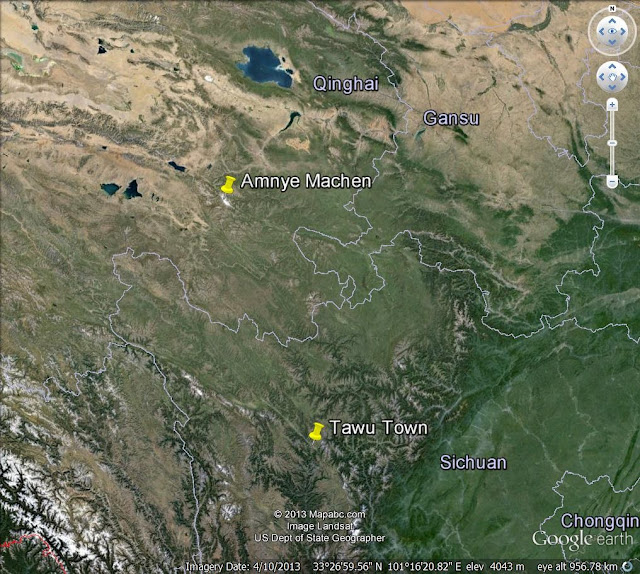 On Saturday 6th of July 2013 a large crowd of Tibetans, including many Buddhist monks and nuns, had collected at Tawu village in Ganzi county of Sichuan province for what appeared to be a pilgrimage to the mountain. According to Radio free Tibet, the number of people collected was about one thousand. The real purpose of their pilgrimage however was not a visit to Amnye Machen. They were going up the hill to celebrate the 78th birthday of His holiness Dalai Lama. Some of the people had already put up a photograph of the Dalai Lama on the hillside and these people wanted to make offerings and burn incense to celebrate the Dalai Lama’s 78th birthday, As these people left for the hillside in their vehicles, they were greeted by a large numbers of armed paramilitary police and soldiers. According to an eyewitness, at least seven army trucks and police vehicles at the scene. Police forced the pilgrimage vehicles to stop. 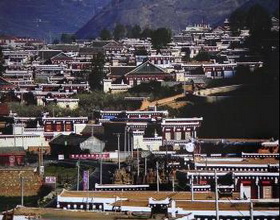 When some some of the Tibetans present, argued that burning incense was not a crime, Police started smashing doors and windows of Tibetan's vehicles and started beating the Tibetans gathered in the area to disperse them. In the scuffle that followed, Police started shooting without warning on unarmed crowd and used tear-gas. At least 8 people were injured with two monks shot in the head and several others seriously injured. However, Tibetans from nearby areas managed to mark the Dalai Lama's birthday despite the presence of paramilitary police. Their in-exile brethren, from all over the world, also participated in processions in honor of their spiritual leader, His Holiness The Dalai Lama, on the occasion of his 78th birthday. On 6th July 2013.

As media reported the police shootings of monks marking Dalai Lama's birthday, A Chinese top official in charge of religious groups and ethnic minorities declared that he would step up the fight against exiled Tibetan spiritual leader the Dalai Lama. He told local officials and religious leaders that the Dalai Lama's separatist activities ran counter to the country's interests and to Buddhist tradition. He added that the Dalai Lama's 'middle way' aimed at achieving so-called 'high-degree autonomy' in 'Greater Tibet' is completely opposite to China's constitution and the country's system of regional ethnic autonomy. Reuters reports that despite a heavy security presence, protests and resistance against Chinese rule in Tibetan areas have continued.

Dalai Lama has become an ultimate anathema for the Chinese Government. No wonder that for the people, who had collected at Tawu, it was an unusual birthday celebration of their revered Dalai lama; one with the police bullets.