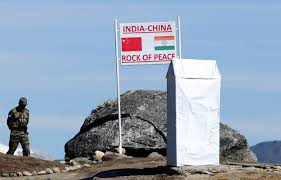 China has come up again with another example of its policy of creating military or political obstacles, whenever there is a scheduled meet of high level dignitaries between India and China. Readers might recall that about a week before former Chinese president Hu Jinto was to make a crucial visit to India in November 2006, Chinese Ambassador to India, Sun Yuxi made a most controversial statement claiming aggressively that the state of Arunachal Pradesh in India was a part of China. It made headlines immediately and became a huge row and it appeared that the visit of the president itself might be put in jeopardy. It turned out later that Sun's statement not only did shock India, it took the mandarins in Beijing also by surprise. The Chinese Foreign Ministry began damage control, clarifying to the Indian Embassy in Beijing, "that China had not instructed Ambassador Sun to speak on the border issue" and that his statement had taken them by surprise. Eventually the visit went through smoothly.

The same story was repeated this year when In a somewhat similar way, People's Liberation Army(PLA) of China created a major border incident by an incursion in the Depsang plains area of Ladakh, as a most unlikely ground preparation for the visit of India's foreign affairs minister and subsequent visit of Chinese new Premier Li Keqiang, scheduled in May 2013. It is therefore no surprise at all that on the day,when India's defense minister A.K. Antony arrived in China on a three-day visit, aimed at boosting strategic trust, a People’s Liberation Army (PLA) Major General warned India not to “provoke new problems” and “stir up” trouble through its plans to increase deployments along the border.

Major General Luo Yuan, is a military scholar of the PLA’s Academy of Military Sciences and is known for his particularly hawkish views on military affairs. He told reporters at an interaction at the All China Journalists’ Association on eve of Indian defense minister's visit; “It is up to India to not stir up new trouble. There is no denying there are tensions and problems between China and India, particularly in border areas. There is still the problem of 90,000 sq km of territory that is occupied by the Indian side (Obviously referring to Indian state of Arunachal Pradesh). I think these are problems left over from history and we should look at these problems with a cool head. Particularly, the Indian side should not provoke new problems and increase military deployment at the border area, and stir up new trouble.” He further added: “ India is the only country in the world which says that it is developing military power because of China’s military threat. So I believe India should be very cautious in what it does and what it says.” Blaming India for the recent troubles he says: “ At the current moment the whole situation was still under control, particularly after Premier Li Keqiang’s visit to India in May which “enhanced” relations. So generally speaking, I think the situation is under control and it is up to India to not stir up new trouble.”

China continues to deploy a huge number of soldiers on Indian borders. According to one estimate, China has deployed 13 Border Defence Regiments amounting to around 300,000 PLA troops on the border with India,. Airfields have also been established at Hoping, Pangta and Kong Ka respectively, along with the existing six airfields in the Tibetan Autonomous Region for supporting fighter aircrafts and to enhance PLA’s airlift capability. It has also upgraded its own military presence in Tibet very close to the LAC in Arunachal Pradesh. The 2010 US Department of Defense Report to Congress indicated that China replaced its old liquid fueled, nuclear capable CSS-3 intermediate range ballistic missile with “more advanced CSS-5 MRBMs” and vastly improved its border roads in the eastern sector bordering India for PLA movement. Intercontinental missiles such as the DF-31 and DF-31A have also been deployed by China at Delingha, north of Tibet. 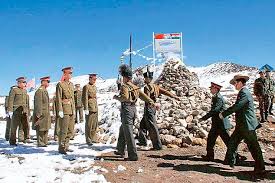 With this background, Major General Luo Yuan's warning appears to be a a case of crying wolf and should be just neglected. Perhaps many other in China also think so. Indian News paper 'The Hindu ' reports:

“Shen Dingli, a strategic affairs scholar at the elite Fudan University in Shanghai, told this newspaper that the Depsang incident would have some impact on the visit, but added that “this is not up to the generals and defence officials to resolve. It is up to … politicians.” He also said that current border mechanisms in place were “not sufficient.” “There should be joint patrols, promises not to enter certain jointly designated areas. Then military [personnel] will not have a chance to meet together at all, or they can patrol together to build confidence and trust.”

Just few days back, Yang Jiechi, China's new Special Representative (SR) met with Indian National Security Adviser Shivshankar Menon, his counterpart on the boundary negotiations, at the Diaoyutai State Guesthouse in central Beijing. He mentioned to the reporters that he was ready to “break new ground” with India on the long-running border negotiations.

Major General Luo Yuan's comments highlight the persisting mistrust between the military establishments of the two countries and from Indian point of view present a grave danger in spite of surprisingly moderate views of some Chinese thinkers and diplomats, which in practical terms means that India can not allow slackening of the efforts on its borders with China in spite of diplomatic bonhomie.