Three Coins in a fountain 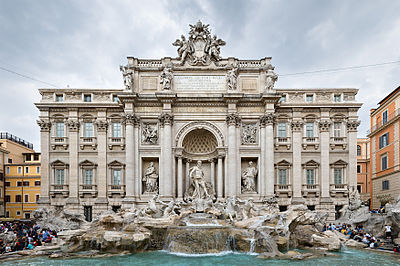 One of my favourite songs during my college days, was “Three coins in a fountain” sung by Connie Francis, often called as MGM nightingale. A friend of mine, possessed a most rudimentary kind of record player those days. One had to individually place a vinyl disc, frequently called as “Record” on the turn table in this player and then manually place an arm housing the piezoelectric head that produced electrical signals corresponding to grooves on the disc. As the disc rotated, a small vacuum tube amplifier played the song through a small speaker. On Sundays and holidays, he often used to play this and many such songs and we all dreamt of America and Holywood. As expected, most of us stayed back in India but my friend, who owned the player, somehow managed to go to US for further studies and eventually settled down there.

Around that time, I also saw an Hollywood flick named as “La Dolce Vita” starring Hollywood hotty Anita Ekberg and Marcello Mastroianni play in a water fountain somewhere in Rome, which was called as three coins fountain. In those days it was kind of tough to find any information about foreign countries in India. Still I found out that three coins fountain was a landmark in Rome and was actually called as Trevi fountain. Since then, I had always included a visit to this famous landmark in my “do it in future” list.

Several years later, I was able to visit the Trevi fountain not only once but twice though with a gap of about 9 years between two visits. The fountain did not fail to impress me during both of my visits with its delicately carved plathora of nymphs, gods, winged angels, birds and bolting horses. The fountain sculptured against the back drop of Palazzo Poli was completed in 1731 and has been a hot favourite of visitors to Rome. 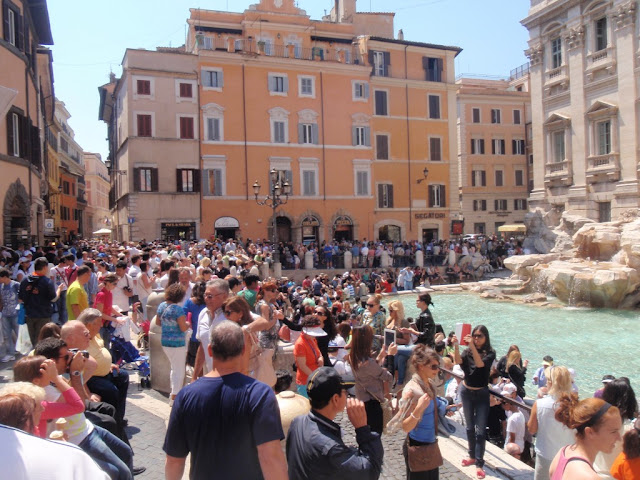 Wikipedia describes the Trevi fountain as :

“The backdrop for the fountain is the Palazzo Poli, given a new façade with a giant order of Corinthian pilasters that link the two main stories. Taming of the waters is the theme of the gigantic scheme that tumbles forward, mixing water and rockwork, and filling the small square. Tritons guide Oceanus' shell chariot, taming hippocamps. In the centre a robustly-modelled triumphal arch is superimposed on the palazzo façade. The centre niche or exedra framing Oceanus has free-standing columns for maximal light and shade. In the niches flanking Oceanus, Abundance spills water from her urn and Salubrity holds a cup from which a snake drinks. Above, bas reliefs illustrate the Roman origin of the aqueducts.
The tritons and horses provide symmetrical balance, with the maximum contrast in their mood and pose.” 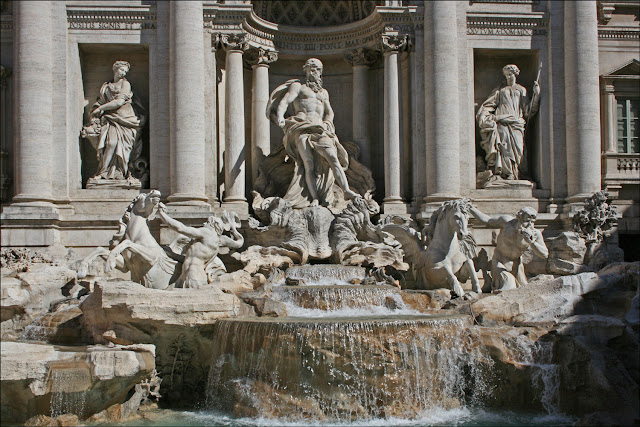 The water gushing out from the urn of the Goddess, falls into a fairly big sized pond with crystal blue waters. A traditional legend says that if a visitor throws a coin into the fountain, he/ she is ensured a return to Rome. In the case of my first visit, the fountain probably fulfilled my wish to return, but during my next visit, it probably thought that “enough was enough,” and I have not been able to visit Rome again after that. (Ha Ha!)

Recently, I came across a news item that very much saddened my heart though. It appears that Trevi fountain's historic sculptures, continuously dosed with water are showing signs of wear and tear and are crumbling with age, lashed by the elements and shaken by endless trampling of tourists. Many people around the world, who have visited the Trevi, probably felt the same.

Yet, Trevi fountain seems to have luck on its side. Pietro Beccari, chairman and chief executive of a famous Italian fashion house, Fendi, was driving through the Eternal City Rome last year (2012) and heard a radio report that a piece of stone had fallen off the Trevi Fountain. He had a brainstorm and thought of a project to preserve the famous Roman fountain. He named the project as “Fendi for Fountains.” Formal announcement was made in January 2013, that Fendi would sponsor a 20-month, 2.2 million euro restoration of the fountain; it will be the most thorough restoration in the fountain's history.
Gianni Alemanno, the mayor of Rome says that the Fendi project covers not only the Trevi Fountain, but four others built around a single intersection. Under the agreement, the renovation site will not include any advertising or references to the patron though a plaque recognizing Fendi’s contribution will be in place for four years only. Mayor's office has already carried out an emergency intervention on the fountain at a cost of €320,000 and a meticulous screening of the monument was done which revealed that the fountain was in a critical state. He says that since Fendi was the first to offer the help, it was accepted.

It appears to be a win-win situation for everyone involved and Millions of people like me who love Rome and its sculptures would be happy that their memories of the Trevi fountain shall remain intact for years and years to come.