The nights of long knives 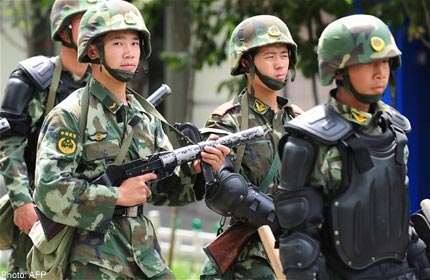 I have one weakness: whenever I visit a place, its memories get firmly embedded in my mind and eventually I develop an affinity for that place. Take for example, Cambodia. I made a short visit there in 2010 to see the famous Angkor Wat temples. Yet, Cambodia has now a special place in my mind. It is true that I had long chats, during my journeys to many temples with my guide in Cambodia, Mr. Bunla, who was well informed and shared his knowledge about his country, its politics and social set up and problems. The result is that, whenever any new news appears in media about Cambodia, I read it with great interest as if it is my own country.

Surprisingly, something similar has happened about a region, where I have never been and can not even hope to visit, in my life time. This place is none other than the famed Silk route of China. My love for all things connected with Silk route really began when I read a book titled as “The Great game” by Peter Hopkirk. I was absolutely fascinated. In later years, not only I read other books by this author, but many other accounts of travellers and adventurers, who led expeditions to this inhospitable desert region. The top honours would naturally go to the fantastic travelogues written by Sir Aurel Stein: Innermost Asia, Serindia and Ancient Khotan. Many modern European and American travellers also have written good accounts of their travels and it should suffice if I say that I have read many of these books and have thoroughly enjoyed them. 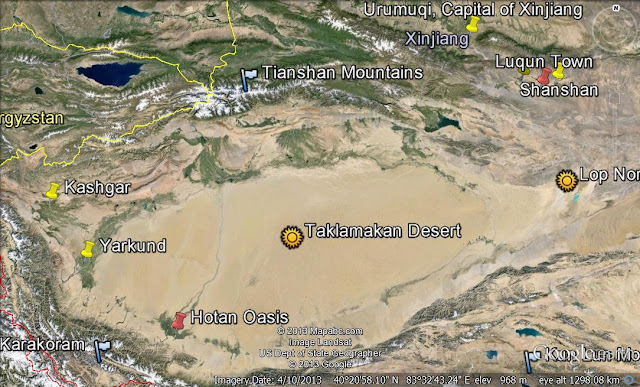 This armchair travelling, has given me a great insight about ancient Silk route and the region, through which, this route passed once: the region what was called as Chinese Turkmenistan and what is known today as Xinjiang. The Geography of this region is quite peculiar to say the least. Central to the region is a huge and most formidable desert called Taklamakan. On southwest of this desert lies the Karakoram mountains which form the natural border with India. On southeast lies another great mountain range of KunLun mountains. On north lies another mountain range known as Tianshan mountains. On the periphery of the desert,and between foothills of these mountain ranges, most of the cities and towns of Xinjiang such as Kashgar, Yarkund and Hotan are located on desert oases. The ancient silk routes passed along the desert peripheri and through these oasis towns. 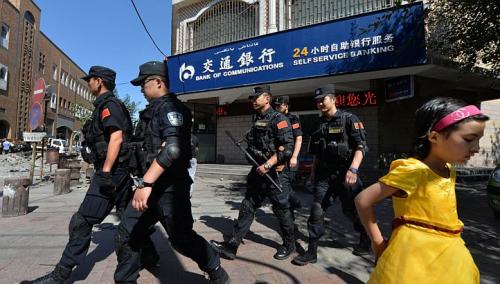 The original inhabitants of this region known as Uighurs are of Turkic origins and follow Islam. They have their culture, which is more akin to central Asian culture. Uighur's separate identity from the mainstream Han Chinese, remains the bone of contention for decades or even centuries. Chinese have been trying to steam roll their standard formulated culture and lifestyle on Xinjiang and Uighurs apparently do not like this and there are periodical clashes like eruptions of a dormant volcano.

Last week, as reported by Chinese news agency Global Times, trouble brewed again in the township of Lukqun, Shanshan county, Turpan district in eastern Xinjiang, when police apprehended about nine suspects, most of whom are aged 18 or 19, including some Lukqun locals. Next day a mob attacked and set fire to a government building, a local police station, a nearby construction site and more than 10 government vehicles, and stabbed both police officers and civilians indiscriminately. The casualty figures reached 35, which included police officers and civilians. Police shot dead 11 attackers and caught four at the scene. Police later blocked all roads to Lukqun at highway exit to Changji, a city some 36 kilometers northwest of Urumqi (Capital of Xinjiang), there were many armed police and special police officers holding guns, in addition to many police vehicles. In the city, police vehicles were parked at intervals along the roads, with police officers patrolling nearby. 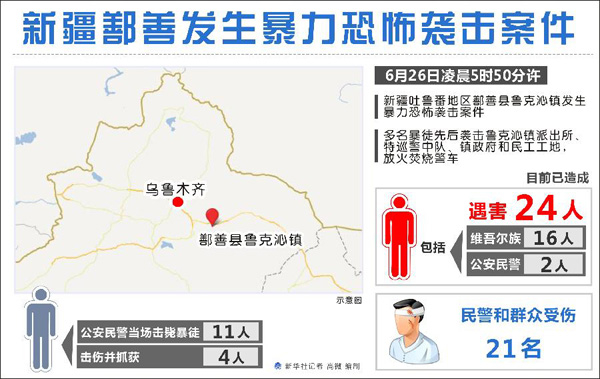 Within few days of the incident, trouble flared again in the island city of Hotan, which is on the other side of Taklamakan desert and more than a 1000 Kms from Lukqum. A mob of more than a hundred people, riding motorbikes and wielding knifes, attacked a police station here after after gathering at local religious venues. In a separate incident, on the same day, some 200 people attempted to "incite trouble" at a major shopping area in Hotan. Global times says that the situation was diffused quickly by local police with no casualties.

Police, said Global times, are checking if there is connection between two riots by checking vehicles and passenger IDs on the highways from Turpan to Urumqi, the regional capital. Chinese are calling all these attacks as terrorist attacks. However Radio Free Asia has reported that the trouble started when police in Hotan opened fire on Uighurs as they left a local mosque. The report said: “ Young Uighurs on motor cycles were leaving the mosque. They were shouting religious slogans...The police were frightened and started shooting at them... At Least two died and one was injured.”

To calm down fears, Chinese staged a large military exercise with about 1000 soldiers in Urumqi with tanks, military vehicles and armoured personnel carriers blocking all access to the capital and also blocking many streets. However, local residents were apprehensive and said that the exercise was done to caution people, as anniversary of large scale riots of 2009 falls on 5th July.

Recently I have read books of two authors, one British and one American living in Moscow, describing an almost identical journey from Russia to China passing through Xinjiang. Both these authors have described in details, how even their short and casual travel through Xinjiang have made them realize the ethnic division and resentment of Uighurs against local administrations controlled from Beijing and how Uighur's old life style and cities were being destroyed by standardized planning controlled from Beijing.

It is obvious that Uighurs have a different culture and way of life than that of Han Chinese. The peace in this region of China is likely to remain illusive unless this ethnic diversity is recognized and given its due respect.