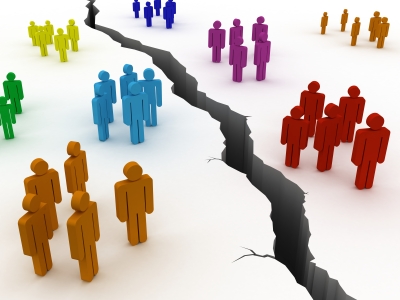 For last few years, the so called socio-economic thinkers of the world had a favourite subject to indulge, in their flowery and lengthy discourses. This favourite topic used to be the digital divide, which perhaps meant the probable economic inequality between groups, broadly construed, in terms of access to or use of knowledge of information and communication technologies. In simple terms this meant a division amongst people of a country or a region or even the world in two classes; people with access to computers and internet and the ones without this access.

It was felt that this earlier definition was no longer valid, when mobile phones swept the markets worldwide. The new definition of digital divide according to some was just a division in two sections; people who had a mobile and who didn't. The lines of division soon started fading and getting thinner as masses worldwide, started giving preference to owning a mobile. Consider for example India, a country of more than a Billion people. As per latest statistics by Wikipedia, there are more than 900 Million mobile subscribers in India. In my house, almost everyone, except the young kids has a mobile. All the servants including our part time maids, cooks, gardeners carry their own mobile handsets. So anyone can conclude that the digital divide has all but disappeared.

I however feel, that drawing this hurried conclusion may not be the right thing to do as digital divide probably still exists and is still making a big difference to the quality of lives of the people. A new report called The Meeker Internet Trends Report, has come up with some interesting insights on how Indians use the web. In spite of great strides made, India's Internet penetration still remains woeful with just 11 percent of the country connected to the Internet. Actually India has the worst figure among the Top 15 connected countries. However, if we talk of numbers only, picture appears much much brighter. India added 88 million new Internet users between 2008 and 2012. It currently has 137 million users, which means it ranks third in the number of total Internet users, following China and USA. 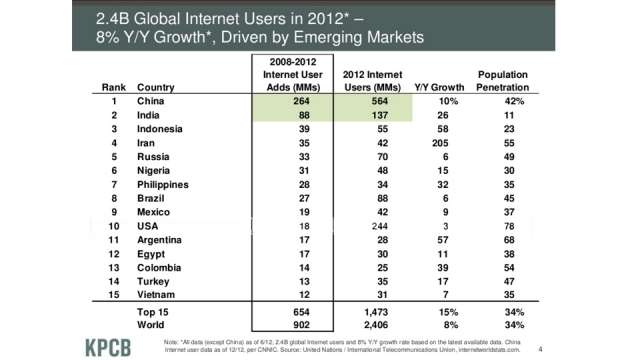 When we talk of number of computers, a survey suggests that there are probably 57 Million Computers in India, which would mean that Computer penetration in India is mere 5%. There is a big mismatch between this figure and Internet penetration figure of 11%. A question naturally arises, how this is possible.

This is entirely possible because majority of Indians, who have access to the internet, do so with the help of their phone or smart phone to be exact. It is clear that future of Internet in India is closely linked not with the sales of computers but with sale of smart phones. A survey carried out by Nielsen in October 2012 says that there are 27 million Smartphone Users in Urban India alone. If you add rural India smartphone users to this and also consider the fact that this survey was done about 9 months before, total number of Smartphone users in India are likely to be much higher.

Some more interesting facts brought out in this survey. The 18-24 age group has the highest incidence of smartphone users (13%) and 22 Million smart phone owners use it for Social Networking. I think, these figures bring out the point that I am trying to make. In future. The number of internet users in India is mostly going to depend in future on number of smartphones, we have in India and not on number of computers. 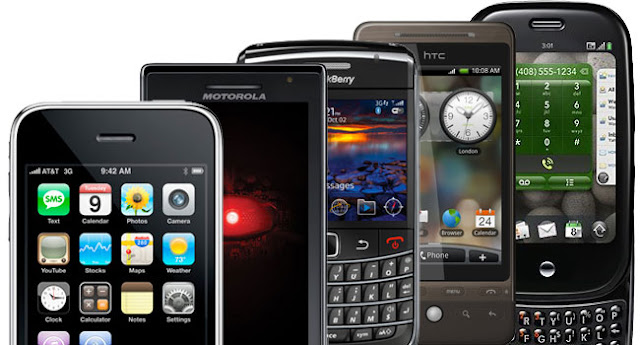 According to me, this means that the digital divide would be determined in future by the smartphone. On one side we have the people with a Smartphone and on the other side we have the people with an ordinary phone. I would rather explain this from my personal experience. Perhaps being on the wrong side of Seventies, I gave my preference to getting a laptop because I thought that it was more suitable for my activities. My wife uses a computer all right but greatly prefers her smartphone. So in our house itself we have the new digital divide, thought not in strictest of senses.

I am just amazed at the unending plethora of applications or Apps as they are called, available on my wife's smartphone. Apart from the usual Facebook, Twitter and Gmail, there are applications for almost everything, that I can do with my laptop. She can play and download music and videos on You Tube, has access to maps and skymaps, can read books on book readers and so many other things like finding anything from spelling of a word to where some stuff is available. Whenever she is in doubt, she can get an answer in an instant. This guy, whom we call as smart phone, is not only smart but a genius. I can feel the digital divide even in our house.

For those readers, who feel more comfortable with numbers, here are the facts for India. Total mobile subscribers 900 Million in a country of more than a Billion people. Total number of people connected to internet; 137 million. Number of computer users 57 Million. Isn't the dividing line for the future getting clearer? This is the new Digital divide.
21 June 2013