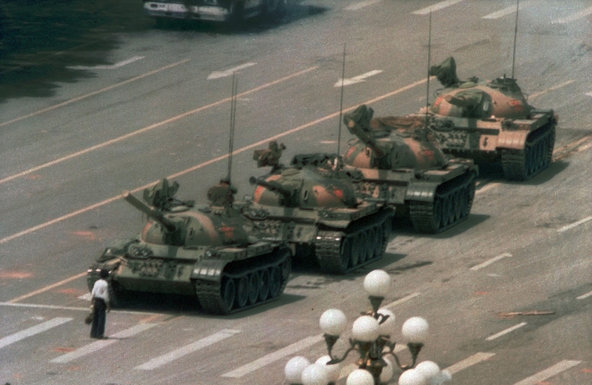 A never ending battle of wits, continues all the time on internet, between China's archaic censorship and ingenious netizens, who always manage to stay one step ahead of the censors and convey messages, which get banned later, on China's Sina Weibo, a twitter like message service. This battle has come to forefront again as Chinese netizens found ways to circumvent Chinese censors to spread their feelings and messages around, with their clever use of tweets and messages to express their feelings about the day of remembrance of the crushing of democracy demonstrations in Beijing by the army on June 4, exactly 24 years back.

On this very day in 1989, student-led popular demonstrations in Beijing which took place in the spring of 1989, were forcibly suppressed by hardline leaders who ordered the military to enforce martial law in the country's capital. The crackdown that initiated on June 3–4 became known as the Tiananmen Square Massacre as troops with assault rifles and tanks inflicted thousands of casualties on unarmed civilians trying to block the military’s advance on Tiananmen Square in the heart of Beijing, which student demonstrators had occupied for seven weeks. The scale of military mobilization and the resulting bloodshed were unprecedented in the history of Beijing, a city with a rich tradition of popular protests in the 20th century. The Chinese government had condemned the protests as a "counterrevolutionary riot", and has prohibited all forms of discussion or remembrance of the events within China. Even the memoirs of leaders who supported the crackdown are banned.

Expecting, that there would be wide spread transfer of messages by Chinese netizens, who would like everyone to remember this sad anniversary day, Chinese censors had banned use of words like ‘Today,’ ‘Tonight,’ “Today is June 4,″ “#June4,”: 'in memory of' (& variants).' For several hours on morning of June 4th, one reference had survived on Weibo (Chinese twitter), that of the number 64, which obviously meant 4th of June. In the early morning it was the 16th most searched term on weibo, rising by midmorning to the 14th; then it was suddenly gone. Any message on weibo with these words met with a response that said: “According to relevant laws, statutes and policies,” the results of the search “cannot be shown.”

There were some even more ingenious attempts to deceive the censors. Most of the world's media had published a photograph in 1989 of a man stopping a long line of tanks as the army crushed democracy demonstrations in Beijing in June 1989. This famed photograph is now considered as a symbol of Tiananmen square massacre. A photo of a Lego man stopping a line a Lego tanks was published by China’s Netease Web site as a part of a slideshow to mark Children’s Day on June 1. Buzzfeed reported following comments from the readers about the image: “You are a brave editor”; “A great way to let our children remember our history”; and, “He was not run over by the tank that day. His name is Wang Weilin. No one knows what happened to him. They ‘evaporated’ him.” The photo of Lego man did survive for few days. By the end of the day on 4th June, the photo was removed from the slideshow, but not before becoming a minor Internet sensation 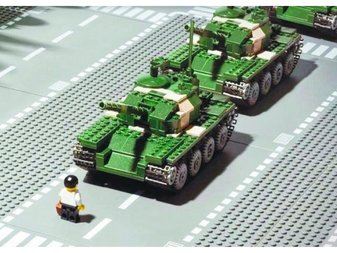 The Global Times, a newspaper belonging to the Communist Party flagship People’s Daily, published an article giving a sermon and strongly defending Internet censorship. It cited a recent decision by Germany’s constitutional court against Google as evidence that “Many countries are trying to regulate their Internet services.” The article said further: “Some claim that any regulation of the Internet is an anti-democratic effort. This deceptive voice has gained support from Western public opinion, which makes China’s regulation of the Internet encounter more resistance than in other countries. People already understand that free speech can not go against social order. Internet regulation is not only an embodiment of the government’s will, but is also laid on the foundation of the public interest. Internet regulation has to be carried out until those spreading adverse remarks fear the strength of the public interest.” 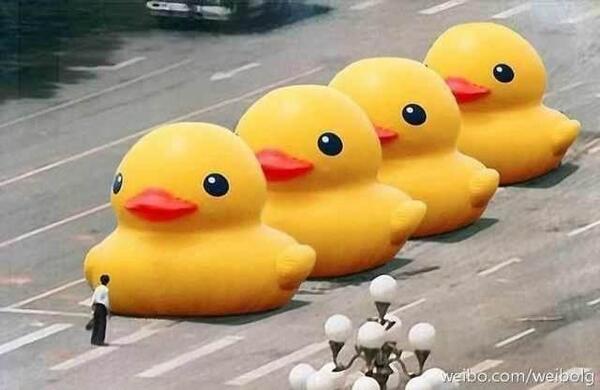 Some words, which could no way be connected with 4th June were also banned. No one could explain why ‘Big Yellow Duck’ was banned till a photograph appeared showing 4 yellow coloured plastic ducks sitting in the Tiananmen square instead of 4 tanks from the original famed photograph. Few weeks back, a single big and yellow plastic duck was found floating in Victoria Harbor in Hong Kong and drew excited attention there and in mainland China. The ducks in this photograph were a reference to Hong Kong, where a mass demonstration was planned on this day. 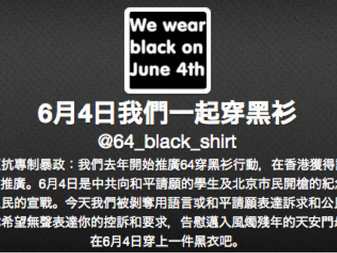