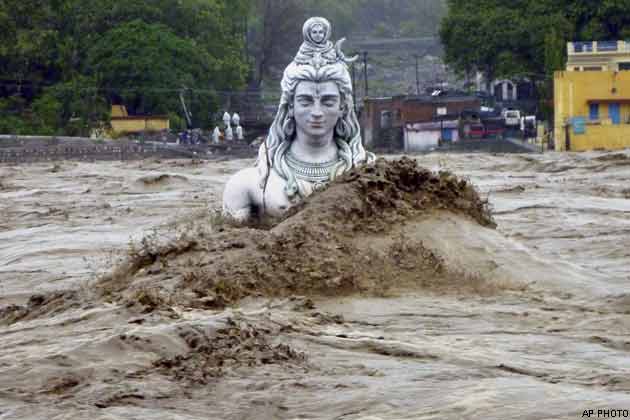 Few years ago, I wanted to add a few rooms to the top floor of my house, which already had one built up room and covered and uncovered terraces constructed about sixty years ago. When I explained my ideas to my architect, his first reaction was to arrange for a labourer to dig a trench besides the foundation of the house with sole purpose of finding out, how deep and wide were the foundation walls. Only after he ascertained that the old foundation walls were sufficiently deep and wide enough underground, he agreed to my plans of adding to the superstructure.

I am very much reminded of this act of wisdom on part of my architect, as I read about the disaster caused by monsoon rains in India's northern state of Uttarakhand. It is true that the floods here were cased by abnormally heavy rainfall like a cloudburst. But, in any mountainous geographical terrain, the excess water in such events, is bound to be carried off downstream, through all vales and gullies that become available to heavy discharge of water. If humans fault and encroach upon this natural waterway by means of dams, barrages and narrow down the water way by means of buildings, they are bound to be punished by mother nature. That is why media are calling this sad disaster as a man made one.

We all have learned in our elementary school geography books, that Himalaya mountain range is supposed to be one of the youngest one on earth. It is not stable and geographic profile keeps altering all the time. It is not that India's federal Government at New Delhi, is not aware of this fact. In a recent statement issued after Indian state of Uttarakhand still keeps struggling to cope up with one of the worst ecological disasters in recent memory, India's federal Environment Minister, Jayanthi Natarajan is reported to have said that an ‘eco-sensitive zone plan’ was in place in the State and that the authorities must not compromise on the ‘fragile ecology’ of the region. She added: “As Minister for Environment, I feel that it is an ‘ecologically fragile zone’ and that the eco-sensitive zone proposal needs to remain in place.” It seems that the National Ganga River Basin Authority (NGRBA) headed by Prime Minister Manmohan Singh had in 2011 recommended that a 130-km stretch from Gomukh to Uttarkashi be declared an eco-sensitive zone. Environmental minister says that “The proposal was accepted and a draft notification was put in place in 2011, which was later finalised in December, 2012, and is still in force.”

If this is the case, the blame must surely go to the state Government for blatantly overriding the norms set up by the federal Government. This is the exact reason for which the State Government of Uttarakhand has been defending itself by crying hoarse that the floods were a natural calamity, while environmental activists maintain that the flood was a man-made disaster waiting to happen.

In fact, the legislative assembly of the state of Uttarakhand, had earlier passed a resolution opposing the move to notify the Gangotri-Uttarkashi stretch as an eco-sensitive zone. The political leaders of the state, rising above party lines, are dead against this proposal by federal Government, because they believe that the move would rob the local people of much-needed infrastructure development and deal a blow to the State’s tourism industry. So we have a clear case here, where for development of the region, we are trying to play with forces of nature; a dangerous act that was bound to invite nature's fury one day or other. 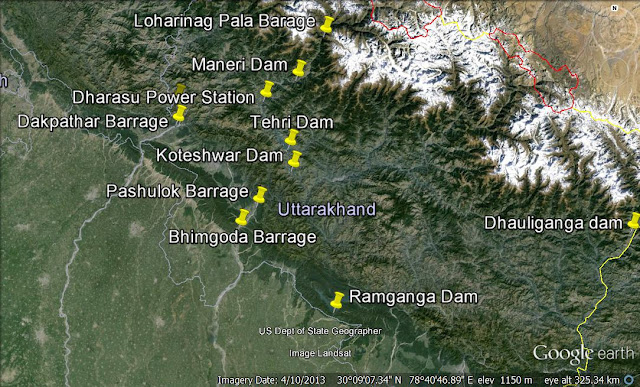 It seems that at least 11 major Hydro-electric power projects are currently being constructed in the state. According to Wikipedia, the list includes, Bhimgoda Barrage, Dakpathar Barrage, Dharasu Power Station, Dhauliganga Dam, Ichari Dam, Koteshwar Dam, Loharinag Pala Hydro Power Project, Maneri Dam, Pashulok Barrage, Ramganga Dam and finally Tehri Dam. I have pin pointed all these projects on a Google earth map. It can be clearly seen that the present flooding has occurred along the rivers on which many of these construction projects have come up. Readers can well imagine how much deforestation must have taken place here.

In addition to construction of dams and hydroelectric projects, it appears from the news, that Illegal constructions on the banks of the rivers and on mountain slopes had proliferated, particularly in the Uttarkashi-Kedarnath region in spite of repeated warnings. Real estate activity and tourism has been allowed without restraint. With nature's full fury, the Alaknanda and Mandakini rivers carried along whatever was built in their ways including houses, hotels, roads and bridges built over years. These were all gone within minutes. This is the sad lesson, we should all learn from and try to curb our actions that interfere with the environment.

Politicizing this issue is not going to help anyone and it would be crucial to study in details the exact course of floodwater flows and whether any of the construction projects have impacted on it. Development by itself can not be the goal, if that is going to bring about such catastrophic events. For the time being, all future construction projects in the hilly Himalayan region should be put into deep freeze.