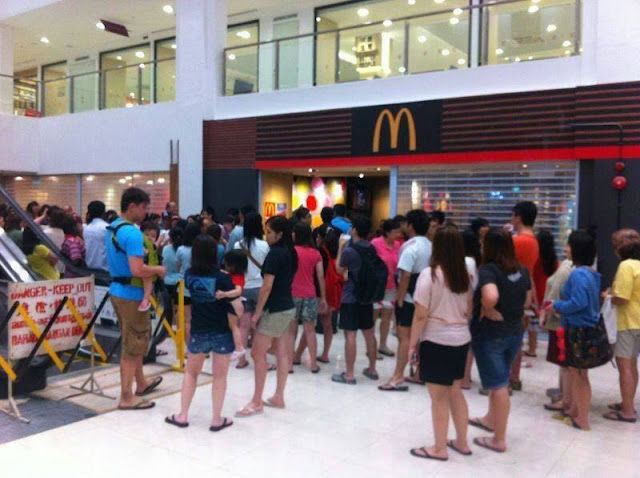 I have always believed Singaporeans to be one of the most, level headed, matter of fact thinking and rationally behaving human beings on earth, who can never get swayed with emotional appeals, blackmails and that kind of stuff. The only thing that probably moves them to make an effort to reach even the end of the world is when something is available on sale there or they find that it is cheaper at that place.

I could not therefore believe my own eyes, when I saw photographs of hundreds of people standing in queues at midnight in front of McDonald fast food joints island wide. Now let me explain! Singaporeans, particularly families, always have their dinner around 7 PM and usually retire by 10 PM or so. At this ghastly hour of midnight, when these people were seen standing in queues, most of the genuine Singaporeans normally should have been in their bed. Yet on night of 26th June 2013, after forgoing their sleep, they were still crowding McDonald joints, even when it was past midnight. 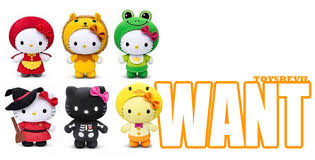 If I tell you the reason for this, you are sure to believe that these Singaporeans have gone crazy. But No! These are ordinary, rational people, who lead their lives in a very normal way. The reason for this craziness was an announcement by McDonald management sometime back, that they would be offering a new toy at great discount along with the purchase of a meal. This fast food chain, always gifts small toys when a customer orders child meals. These are small plastic toys like cars or funny creatures, which children love to have. But this new toy was special. McDonald called it “Singing Bone” Black Hello Kitty and had announced that they would be offering this toy from midnight of 26th June at a fantastic discount. Only 4 toys would be given maximum for a customer. The toy was a limited edition and would not be available again.

Now what the hell is this Hello Kitty? May be some of my young readers might have a reason to feel offended, but I so far knew only Micky's, Barney's and Barbie's of this world that dominate the children's rooms all over. I turned back to Wikipedia and realized that my ignorance was just unpardonable. Hello Kitty happens to be one of the most favourite toy for kids, particularly girls, from all over the world. 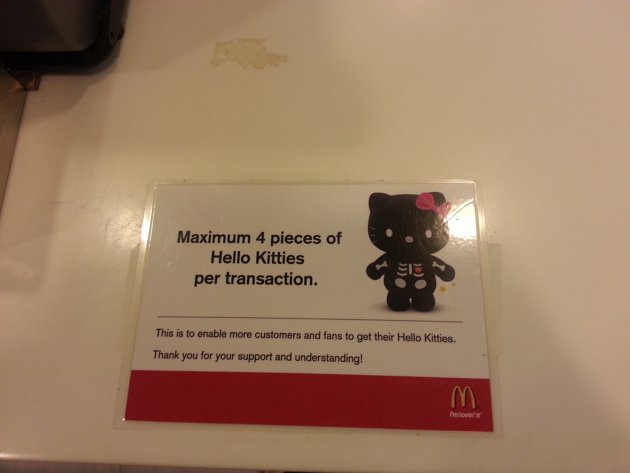 A Japanese company, Sanrio, which sold rubber sandals with flowers painted on them, realized in 1962 that they could make great profits by adding a cute design to the sandals and hired cartoonists to design cute characters for his merchandise. As a result, the company produced a line of character merchandise around gift-giving occasions. A part of this product line, Hello Kitty was designed by Yuko Shimizu and was added to the lineup of early Sanrio characters in 1974. The character's first appearance was on an item was a vinyl coin purse in Japan where she was pictured sitting between a bottle of milk and a goldfish bowl. She first appeared in the United States in 1976. After that there was no stopping back. In 1999, Hello Kitty appeared on 12 000 different products yearly. By 2008, Hello Kitty was responsible for half of Sanrio's $1 billion revenue and there were over 50 000 different Hello Kitty branded products in more than 60 countries.

This character, originally designed for young girls has now become popular with grown up girls and ladies too. Why? No one knows the answers. Many collect each and every new avatar in which this cat appears and there is a virtual mania for this. Yet, no rational explanation can be given for Singaporean's late night madness for Kitties. The drama continued even in the wee hours and early mornings as thousands now lined up for the toy. There were brawls and cat fights and at few places police had to be called in.

Singing bone Hello Kitty, offered by McDonalds for SG$ 4.60, a black coloured stuffed toy with bones painted on it and looking like an overfed skeleton, was the last of a series of Hello Kitties being offered to customers since May 2013. McDonald management was completely taken by surprise by the mad rush of the people. There were immediately advertisements over net, including e-bay for resale of this stuffed toy, with prices ranging SG$ 50 to several hundred. One advertisement on e-bay offered it for 1,26000 SG$, but turned out to be fake.

All McDonald outlets ran out of black kitty stocks by 10.30 AM on 27th June 2013 with some running out withing hours of previous midnight. It appears that in year 2000, this chain had similarly offered Hello Kitty promotion and there were scenes of mayhem, fights and injuries. The chain therefore was extra careful this time, but the response was unprecedented and most surprising.

What is impossible to fathom is the frenzy and mad rush to buy this, not a particularly cute looking stuffed toy, even by grown ups and families at an unearthly hour of midnight?
Life sometimes is stranger than fiction. Isn't it?