I just read an amazing report, which says that Chinese buyers have purchased 20,000 kg of Darjeeling tea from India recently, and there is a growing demand for it in the country. This premium beverage is a hit with the Chinese youth in cities like Beijing and Shanghai and is also doing well as a corporate gift item. The younger generation in China is preferring black tea in the ready-to-drink packs.

It may surprise many readers that till middle of nineteenth century, India did not produce even a Kilogram of Tea. In the year 1835, a British officer, Dr. Arthur Campbell, planted few tea plant seeds in the compound of his bungalow in Sikkim with the help from the ruler of Sikkim, The Chogyal. The seeds grew into fine trees. Encouraged by the results, many British businessmen invested in Tea gardens in the Indian states of Asaam and Bengal and tea production took off in India. 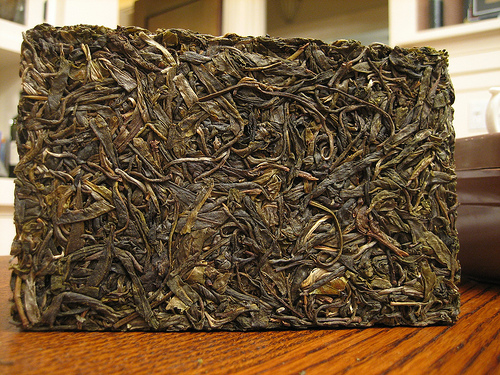 Prior to start of Tea gardens in India, all the tea that was consumed here, was brought from Tibet. This Tea was imported in form of very hard and black coloured bricks, each weighing 2 or 3 Kilograms. Many such Tea bricks were placed in lamb skins, which were later stitched to make a package. Such tea packages used to come to India from Tibet. To make the brew from these bricks, a brick would be placed is a large steel pot filled with water and placed directly on the fire. The brew would be allowed to boil over the fire, till it was strong and dark. Salt, Yak butter and Barley would be added to the brew and the Tea drinkers would get their wooden cups filled from the pot on fire with the help of a ladle and satisfy their craze for this brew.

Even though the Tea bricks came to India from Tibet, it was not produced there. Tea gardens wear located to east of Tibet in southeast Yunnan, a province of China, in the vicinity of Mekong river. The region here is mountainous and hilly. Tea plants were grown and are still continued to be grown on the gentle hill slopes around here. The famous Tea from this region is known as “Pu'er” Tea. This region is extremely picturesque with snow clad peaks in the background, forests of Deodar, Birch and Fir trees, abundance of beautiful blue water lakes and crystal clear weather with zero pollution. 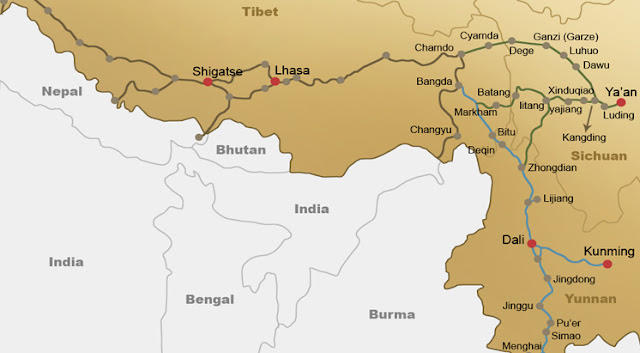 Tea bricks were then exported to India through capital of Tibet, Lhasa. The route through which the Tea bricks would be transported to India was a very difficult trail passing through mountainous regions and was known as Tea caravan Trail. This trail started in the vicinity of a village known as Xishuangbanna located in southeast Yunnan. From here. the trail passed through Lijiang and crossed Yangtze river near 'Tiger-leaping Gorge'. It continued to Zhongdian near Tibet border and then crossed into Tibet at Deqin village. From there it went on to Lhasa through extremely mountainous region. From Lhasa the trail would reach Sikkim through Nathu-La pass and then to India.

When Tea production picked up in India, there was no demand for Chinese grown Tea any more and eventually caravans bring tea by Tea Caravan trail, stopped bringing in Tea. India is now world's second largest Tea grower.

But now, things have reversed. The fact that huge orders are being placed for Darjeeling Tea by Chinese buyers, might look very odd. Something like selling sand to Arabs or ice to Eskimos. China is offering $15-$40 per kg (Rs 810 to 2,160) depending on the quality. At times, they are offering even better prices than the Europeans. India's tea exports to Britain, the biggest European market for the beverage, has taken a hit from 22 million kg a year to 16 million kg over the past five years with Kenyan tea gaining at the expense of the "thick" India black tea. Total annual consumption of tea in Britain is about 100 million kg, of which nearly 60 million kg is imported from Africa. 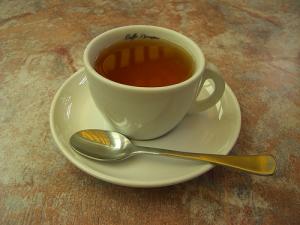 The reasons for this sudden increase in intake from China is a heart warming news for tea growers, In China, tea is considered among the seven necessities, along with wood, rice, oil, salt, soy sauce and vinegar. New tea boutiques that have come up in Beijing and Shanghai, who are selling Darjeeling teas. It is possible that Chinese importers may even buy more teas at a better price in the new season.

Black tea market in China is actually growing and there is demand for both Assam and Darjeeling teas. Darjeeling tea is being consumed by upper middle class people while CTC (Assam tea) is consumed by the middle class people. China, which produces green tea, may turn out to be a major market for Indian black tea. The growing acceptance of Indian tea in China appears to be part of a new global trend among younger consumers to try out different varieties of the beverage.

China produces 1475 million kg of green tea annually yet black tea is gaining ground in China. This is something similar to more urban Indians turning to green tea. The market share of green tea has actually risen to 31 per cent from 17 per cent worldwide over the past decade. Yet the departure from tradition of drinking green tea, appears to be more significant in China than perhaps anywhere else, because drinking tea happens to be part of the culture of China, the land where tea originated.