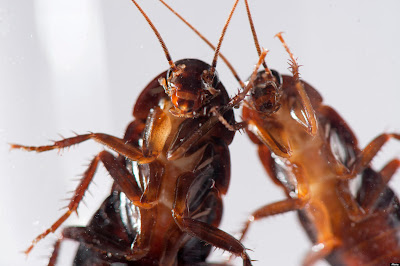 I am aware that for most of the feminine readers of my blog, subject matter of this post is not likely to be very palatable, yet I have found it so interesting that I would request them to suppress their natural aversion and continue reading it because the facts are absolutely amusing. I am writing here about Roaches, Cockroaches to be precise.

Perhaps there is no other organism, which is found everywhere on this globe. Cockroaches have been here from the Carboniferous period or from 354–295 million years as fossils from this period have shown their presence. They come in all kinds of shapes, sizes and packages. There are about 4,600 species of cockroaches against 5400 species of mammals and only 30 species from this long list are considered as pests. The world's smallest cockroach is only 0.3mm long and lives in ant nests. The heaviest cockroach is the huge Australian Rhinoceros Cockroach that grows to length of 8 centimeters.

A team from North Carolina State University in US, led by Dr Coby Schal has been studying cockroach behaviours for more than 2 decades. Researchers from this team first noticed 20 years ago, that some pest controlling poisons were failing to eradicate cockroaches from households and other properties, because the insects were simply refusing to eat the bait. The team decided to take up a study of cockroach behaviour to food.

In an article published in the journal Science, Dr Coby Schal has explained the results of this new study that has revealed a "neural mechanism" in cockroaches behind this refusal. Dr. Schal's team carried out experiments in two parts. In the first part of the experiment, the researchers offered the hungry cockroaches a choice of two foods - peanut butter or glucose-rich jam [known as jelly in the US]. Dr. Schal writes "The jelly contains lots of glucose and the peanut butter has a much smaller amount.” Surprisingly researchers found that " The mutant cockroaches tasted the jelly and jumped back. They were repulsed and then they swarm over the peanut butter." 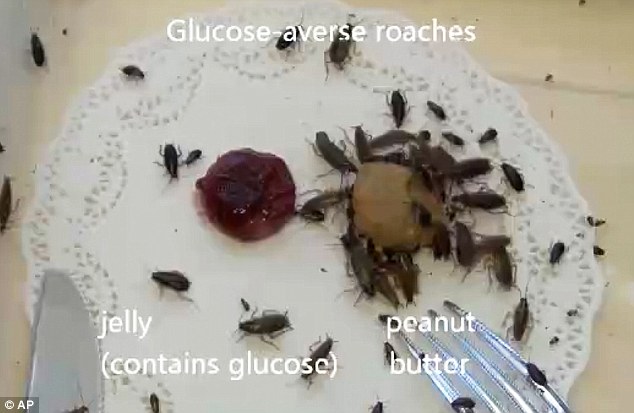 In the second part of the experiment, the scientists immobilised the cockroaches and used tiny electrodes to record the activity of taste receptors (cells that respond to flavour that are "housed" in microscopic hairs on the insects' mouthparts.) By analysing the electrical impulses, the team was able to find out exactly why the cockroaches were so repulsed from eating sweet food.

There are specific cells in the mouth of all animals and insects that respond to a specific taste such as bitter, sweet etc. In case of these cockroaches, the cells that normally would respond to bitter compounds were actually responding to glucose, which meant that they were perceiving glucose to be a bitter compound. The sweet specific cells also responded in this case, but cells that responded to bitterness actually inhibited the cells responding to sweet taste. So the end result was that bitterness could override sweetness. Highly magnified footage of these experiments clearly shows how a glucose-averse cockroach reacts to a dose of the sugar. Dr. Schal says: "It behaves like a baby that rejects spinach. It shakes its head and refuses to imbibe that liquid, at the end, you can see the [glucose] on the side of the head of the cockroach that has refused it."

I find this extremely amusing. We humans are told all the time by medical profession and dietary experts, how sweets and junk foods are bad for our health, but even with our advanced brains and knowledge, we have not been able to get away from these foods, whereas a lowly insect has modified itself so that it can avoid glucose and a possible death by eating along with it some other poisonous substances used in pest controllers.

The process of natural selection, discovered by Charles Darwin in 1858 would suggest that over a period of time, such individual cockroaches, that have by chance the genetic change that causes them to avoid the sweet bait and therefore death, would have a greater chance of survival and reproducing. It is natural that their descendants with the trait would in time, replace those that lacked the trait in the cockroach population. Dr. Schal says that this is the same process that has led to the evolution of antibiotic resistance in disease-causing bacteria, and warfarin resistance in rats.

According to Dr Schal, this was another chapter in the evolutionary arms race between humans and cockroaches. He adds: "We keep throwing insecticides at them and they keep evolving mechanisms to avoid them, I have always had incredible respect for cockroaches," he added. "They depend on us, but they also take advantage of us." Very true!

This household insect, hated most by almost everyone, thus has won a major battle against sweets that could lead it to its death, something we humans simply are unable to do. Even if we hate cockroaches, it is high time that we respect them.