Parenthood for sale? No way!

More than a decade ago (2002), I had watched a Bollywood movie, dealing with a subject that was quite revolutionary and path breaking at that time: surrogate motherhood. The film was about a married couple, who found that they can never have a baby because the lady could not carry the fetus during pregnancy and how her best friend agreed to become a surrogate mother.

Today, surrogacy has not remained a taboo any more and there are fertility clinics in India that offer this service commonly. Many married women with children, agree to carry someone else's fetus for full 9 months to be able to earn a substantial chunk of money that awaits them, when the baby is delivered and which can help in their own children's education or meet some other expenditures. I do not want to discuss here ethics or propriety of surrogacy, because it is now socially accepted and considering the facts that many childless couples can finally find a new joy in their lives and the baby is genetically theirs, there could hardly be any moral objection to it. 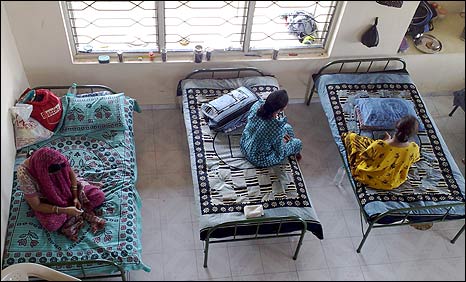 However, there are many unfortunate couples, for whom even surrogacy can not help, because the woman is unable to produce an egg that can be impregnated in a petri dish. If such a couple wants to have a baby, they do not need surrogate mothers, but female egg donors. In such cases, many other issues crop up. All parents want their children to look like themselves. For this reason, Japanese or European couples may not accept an Indian egg donor even though in these affluent countries, it is rather difficult to find an egg donor. However, as far as Europe is concerned, they have found a new source plentyful of egg donors, after the Spanish economic disaster. Spain has become a new destination for women and couples seeking to become pregnant through in vitro fertilization in recent years, because egg donors are plentiful.

I recently read about the case of a Spanish woman, Mónica Campos, a 34 year old Spanish lady, who has long, dyed-blonde hair. She worked for a time as a model while still in high school, but was a happily married woman till the real-estate crisis hit Spain. Spain's construction industry was collapsing and Campos' husband Eduardo, had to give up his business selling used luxury cars as his customer base dried up. Soon, the couple was no longer able to afford their monthly mortgage payment on a house with a garden in Maçanet de la Selva. The bank was threatening to foreclose and Campos could already picture herself on the street, with a four-year-old and an infant.

It is then, when Monica heard about fertility clinics and approached a private clinic for reproductive medicine in Granollers, near Barcelona, and decided to become an egg donor. For each donation cycle, Campos received just under €1,000 as compensation for both her time and the inconvenience. Despite a legal limit of six donations, Campos had her eggs harvested 14 times in just under two years. She earned around €10,000, exploiting her body to keep her family from plunging into poverty. Since both she and her husband were self-employed, neither of them could claim unemployment benefits. Only after a year, did they start receiving a family allowance of €640 a month. She had saved the family from financial ruin.
Egg donation is a cumbersome and time consuming medical procedure. It takes place anonymously, and a maximum of six children can be born from eggs donated by any one woman. The donor has to go through check-up at the clinic, where a minimum of 10 appointments are necessary. Potential donors are tested for hereditary diseases and possible genetic defects; they have blood drawn, receive an electrocardiogram and undergo a psychological evaluation. If found acceptable, donors have to take daily hormone injections in the abdomen for two weeks to stimulate ovaries and produce more eggs.

Once Monica realized that egg donation was an easy way out to earn money, she started approaching other clinics in Barcelona or the surrounding area as soon as she could, ready to donate again and keep her source of income. She never told the doctors about her previous donations. On the contrary she pretended to be philanthropic and told the doctors that she was motivated by a desire to help infertile women conceive. She never said that she is doing this only for money.

Mónica Campos donated eggs regularly for two years, until her ovaries could no longer produce any more eggs. She even tried injecting herself with the highest possible hormone dose. The result was that her abdomen swelled, but her body didn't produce any more eggs. After an ultrasound check, she received the final payment of €300 and that was the end of her egg donations and the income out of it. Yet greater health problems awaited her. Three years after her final course of hormones, Campos' gynecologist diagnosed her with abnormally enlarged ovaries. She experiences chronic pain, not only in her abdomen, and in 2010 was diagnosed with fibromyalgia, a condition that makes every movement an agony. She has been medically certified as 51 percent disabled. She barely eats anymore, trying to lose the weight she has gained.

Her husband still remains unemployed. Her illness makes her irritable and her marriage is barely holding up under the strain. Since Monica is 51 percent disabled, she can not claim disability allowance , which requires at least 65% disability. The only right spot for the couple is that they have obtained a two-year debt moratorium and will be able to keep living in their house for at least that long.

The really tragic part of this story is that in spite of all the troubles, she has undergone, Mónica Campos, for her part, is now considering hiring herself out as a surrogate mother. Surrogacy is banned in Spain, but couples in the United States will pay up to $150,000. She says: ."If a rich couple provides me with a place to live, I'll carry their baby.”

Monica's case demonstrates that egg donation can be real harmful if done on regular basis. Similar is the case with surrogacy. In India, fertility clinics say that them limit surrogate pregnancies to two times for a woman. However what happens on ground and the health problems that face surrogate mothers are not accurately recorded. In short, parenthood can not be offered for sale as a business and can not be considered as a means of earning money. It has to be a philanthropic endevour. The major responsibility here is of the fertility clinics, who consider this as part of their business, as poor women are likely to get attracted by the easy money.