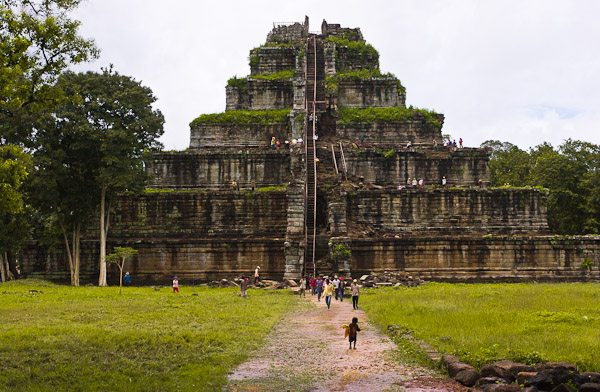 Mahabharata, the greatest Indian epic, describes a great war fought between forces of good represented by 5 Pandava princes and those of evil represented by 100 Kourava princes. The eldest of the Kouravas, Duryodhana, ran away from the battle ground in defeat and hid himself away. The Pandawas helped by Gods, soon found out, where he was hiding and challenged him to come out and fight it out with any of the 5 brothers. Duryodhana, even in his defeat, was still a great warrior and accepted the challenge, but refused to fight with any one else except Bhima, whom he considered as the only person who matched his own fighting skills.

The stage was now set for a royal battle between these two greatest warriors, who initially started the fight with their maces, soon broke them and finally resorted to bouts of wrestling with clear intention of killing the opponent. The royal fight was witnessed, besides other Pandava brothers, by Krishna and few other spectactors.

Cambodia's Khmer sculpturers chose this battle scene for creating a free standing mega sculpture, carved out of red stand stone to adorn the great temple of Hindu God Vishnu, being built by by King Jayvarman IV (928-941 CE) at Koh Ker in northern part of Cambodia, 180 miles northwest of Phnom Penh and not very far from Thai border. Sometime after 1970, during Cambodia's civil war, this grand monument was hacked and stolen from the temple premises. I have already described in these three articles ' Wrestlers of Koh Ker,' 'Would Duryodhana ever come back home?' and 'Battle Royal of Koh Ker, now come the spectators!' how 4 of the 12 statues have been discovered in USA and where they are kept at present. 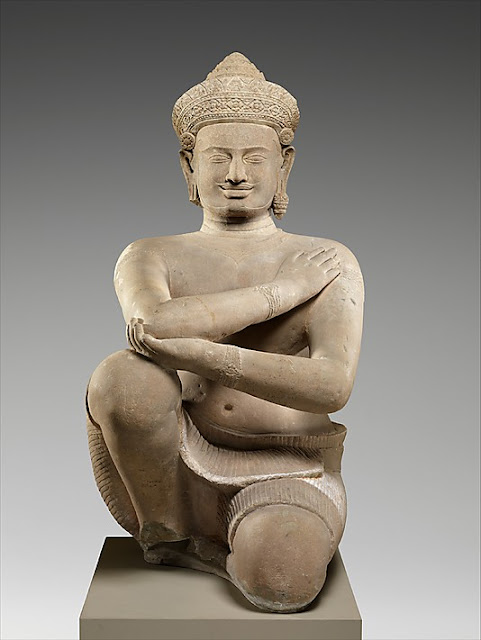 The two statues of so called 'Kneeling attendants,' which according to me are actually of two other Pandawa warriors, because of their sitting stance or posture known in ancient India as 'Veerasana' or Sitting position for a warrior ready to join a battle, were found to be on display in New York's Metropolitan Museum of Art, guarding the doorway to the Museum’s Southeast Asian galleries since they opened in 1994.

Cambodian officials visited this Museum in March 2012 to photograph its Khmer items. Later, they submitted evidence to the museum, that the works had been improperly removed from the Koh Ker temple complex, such as photographs of the statue’s broken-off bases, which were left behind at the site, and witness statements that the Cambodians had collected suggesting that the statues were intact as recently as 1970.

The two Pandava princes, ready to battle were received by the New York museum as donations from art collectors, whose actions do not appear to be on board at all. In 1987, Spink & Son, a London auction house, and a longtime Khmer art collector, Douglas A. J. Latchford, jointly donated one of the two heads. A second head was donated by Raymond G. and Milla Louise Handley in 1989, who also had bought it two years earlier, also at Spink & Son. In 1992 same Mr. Latchford gave the museum the two torsos. Museum conservators reattached the heads and bodies together in 1993.( Mr Latchford was listed as owner of the 'Duryodhana' statue also, for auction by Sotheby's.) Mr Latchford agrees that the statues have been stolen from Cambodia but justifies this by saying that if they would have remained in Cambodia, Khmer Rouge would have shot them up for target practice. Very Strange argument no doubt!

Cambodian authorities began negotiations over the statues with the museum in June 2012. The museum then decided to send Sharon Cott, the Museum's general counsel, and John Guy, its Southeast Asian curator, to Cambodia in March 2013 to resolve this thorny dispute; whether these two pieces of ancient Khmer art, which the museum had for long and prominently exhibited, were actually the products of looting. It took no time for the museum officials to get convinced that the statues have indeed been smuggled out of a remote jungle temple around the time of the country’s civil war in the 1970s.

Last week the museum said it would repatriate the life-size sandstone masterworks, known as the Kneeling Attendants back to Cambodia. The museum has now told Cambodian officials in a letter that it hopes to send the objects as soon as “appropriate arrangements for transit can be mutually established.” Cambodians are naturally overjoyed and happy. The secretary of state with the nation’s Office of the Council of Ministers,, Chan Tani,, expressed his excitement about the return in these words. “This shows the high ethical standards and professional practices of the Metropolitan Museum of Art, which they are known for.”

For Millions of Khmer art lovers from all over the world, which includes me too, this is great news. My wish is that sooner or later, all the 12 statues that were constituents of this grand spectacle at Koh Ker, would be found and returned to Cambodia. Kudos to New York's Metropolitan Museum of Art.

A ceremony was held to commemorate the return of the Duryodhana, to Cambodia on May 7, 2014 at the US Attorney’s office in New York. Sok An, Cambodia’s deputy prime minister and  Preet Bharara, right, US Attorney for the Southern District of New York, were present.

The second statue of “Bhima,” was bought in 1976 by the Norton Simon Museum in Pasadena, California. After months of discussions, the US museum also agreed to return its statue to Cambodia, according to Sok An. “Duryodhana’s” homecoming is expected in June, officials said, and it is hoped that “Bhima” will follow around the same time.