I have been a myopic throughout my life. If I remember correctly, I was prescribed my first pair of glasses, when I was just an eight year old boy. For my entire life, my spectacles have been an integral part of my life except for occasional days when I broke or lost them. Yet, there were few months or may be couple of years, when I had my freedom from this contraption that always adhered my eyes. This happened when I had a job in Mumbai and naturally was staying there.

One day, as I was browsing through the newspaper in the morning, I saw an advertisement for contact lenses, a concept that was something unheard so far in India. I was absolutely thrilled, just with the idea of getting rid of my long time companion; my spectacles. Next week end, my wife and I, travelled to that shop situated in Flora Fountain square: actually quite far away from my house. The salesman explained and showed us everything about this new discovery. There was only one problem, it costed a whooping amount of 250 Rupees. An astronomical amount those days! Slightly dejected, we came home. Next few days were spent discussing whether it was prudent to spend such a large amount from our meager savings on a fashion accessory. But finally my wife won and we decided to go for the lenses.

Next few weekends were spent visiting the optician, all kinds of eye measurements, trials and so on. Finally after few weeks, my lenses were ready and I was asked to come for a trial. It was rather tricky to try them, as those days only hard glass lenses were available. An elaborate procedure was explained to me about cleaning and maintaining the lenses. What I found toughest was putting them on and taking them off. 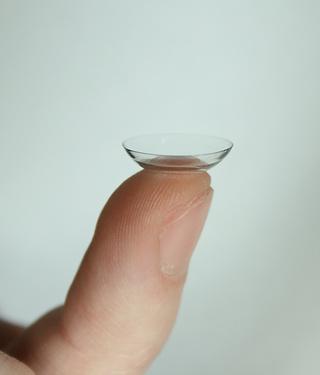 To start with, even though the vision was like a dream, the lenses proved to be a pain in the neck. There were many problems. I found the lenses very painful. I started blinking my eyes too often and with slightest possibility of a breeze blowing in my direction, I had to guard my eyes. There were separate lenses for left and right eye and incorrect insertion would result in pain. My eyes often became watery and red. Slowly I picked up the expertise and tricks of using the lenses.

Then on one morning disaster struck. After having my bath, I was putting on my contacts. I had inserted the lens in my left eye and had taken the other lens on my index finger and was inserting it in the right eye. It was there right on my index finger but next instant it was gone, It just disappeared. I really panicked. I looked everywhere, but it had just vanished. I had good vision on my left eye because that lens was in place. Finally, I called my wife and briefed her about the situation. She also got worried. It was nothing short of a calamity to loose something for which, we had paid an astronomical sum of 250 Rupees. For next 15 minutes, both of searched everywhere but the lens had just disappeared. 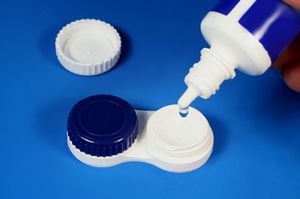 Meanwhile, my sister-in-law, who was about my age and was visiting us, came to know about the commotion in the house and after learning about the crisis, joined the search. We searched everywhere, every inch of space on table, where I was sitting, on floor, mattresses, beds, on windowsills, but the lens was just gone. We even looked into the balcony and window panes, which also was of no avail. We found many things, that have been missing for days, such as a ball point pens, coins and handkerchiefs. Our frantic search for next one hour had a positive fall out: the house was cleaned thoroughly and completely. There was not even a speck of dust anywhere.

I was however in no mood to see the positive side of our search operation. Firstly I had just lost my new found freedom from spectacles and most important was the financial loss of such a large amount. Feeling downcast and dejected, I just gave up all hopes and in utter desperation lied down on my bed and closed my eyes.

There was a sharp pain in my right eye as I closed my eyes. There must have been a heavy speck of dust in upper left corner of my eye, I thought. As I touched the eye with my finger, I realized in a flash, that it was no no speck of dust but my long lost contact lens, ensconced in the corner of my eye, in it's safe secret place. I jumped and screamed with joy. My wife and sis-in-law came to the room running. I told them about the discovery. We laughed and laughed

It was the greatest ever 'lost and found' case for me. I never lost my contact lenses after that because I knew knew where to look for those slippery guys if they went missing again. Experience is a great teacher isn't it?