Chinese 2013 Incursion in Northeast Ladakh: Why did they do it? Part II Dr. Sven Hedin (1865 – 1952), was a remarkable man and a great explorer of the twentieth century. He was born to Ludwig Hedin, Chief Architect of Stockholm, and Anna Berlin Hedin, in Stockholm, Sweden. From an early age, he was inspired by great explorers of those times like Livingstone. At the age of twelve, he decided to pursue the life of an adventurer. He got his first opportunity to follow his internal urge, when he studied at the University of Stockholm. During the spring and summer of 1885, he travelled through Russia, Caucasus, Persia, Iraq, to Istanbul. He accepted work as a tutor in Baku, on the Caspian Sea and continued his travels in the region for next few years. After returning to Sweden in 1889, Hedin studied geography and geology.. In 1890 he served briefly as an interpreter with the Swedish/Norwegian embassy to the Shah of Persia and went on a 3 600 mile long journey through Asia. Hedin was blinded in the early 1890s in one eye, and suffered from it until he was 82. He returned home in 1891. He published his thesis in the same year and received his PhD – at the age of 27. After this there was no looking back for him. His subsequent explorations included:

1893-1897. Russian Central Asia, crossing the Pamirs through Kyrgyzstan; Tarim Basin, Taklamakan Desert to the Khotan River. He just barely survived this expedition.
1899-1902. Floated down the Tarim until stopped by ice; explored further around and in the dry Lop-Nor basin, visiting the deserted site of ancient Lou-Lan.
1905-1908. Managed to sneak into Tibet, and explored extensively in its southern and western regions.
1923 Peking to Moscow
1935. Mongolia and the northern and eastern parts of the Tarim Basin.

Hedin has, as was the practice during those days, recorded full details about each of his journeys. He not only describes the terrain that he has traversed, but has actually logged down details such as coordinates, altitude and distance from previous camp, for all places, where he camped during his expeditions. He also mentions geographical details accurately and meticulously. His travel accounts, supported by drawings, panoramas and photographs are of significant help, even now, in interpreting satellite photographs or programmes like Google earth. In his own words he says: “I will try to give a résumé of the orographical, morphological, hypsometrical and hydrographical observations as compared with my earlier results and those of other travellers.” A meteorologist would always accompany him to record all observations such as longitude, latitude, altitude etc. 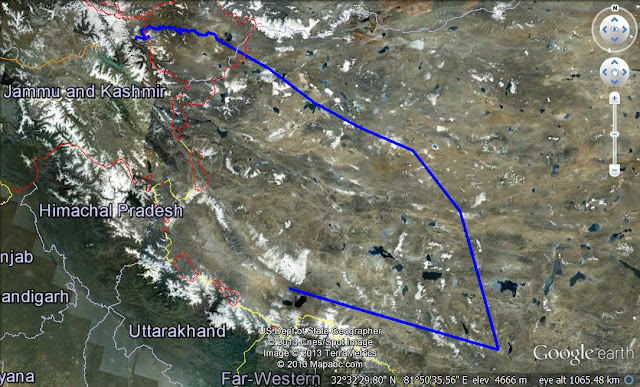 Out of his journeys across Asia, the journey of our particular interest is the 1906-1908 journey through Tibet. Hedin began his expedition on August 14th 2006 from a village known as Tankse in Ladakh, where Shoyok river makes a U turn and starts flowing northwards, and ended it almost two years later near Raksas-Tal or base of the Kailash mountain in Tibet. Dr. Nils Ekholm accompanied him on this expedition as his meteorologist.

Hedin was located at camp 283, few Km east of the Burtse Camp, on the old winter trade route going to Karakoram pass on 19th December 1907. From here he crossed over to Aksaichin and Tibet to reach Raksas Tal in month of July 1908 by a route shown as a blue line in figure above. However, first few days of this great journey only are of our interest and I plan to concentrate only on this part of the route. From camp 283, proceeding towards east along Murgo Nala, Hedin reached the fork where Burtse Nala branches off to east. At this point, Hedin decided to try a short cut across the formidable mountains looming large towards east. He describes this part of climb in these words.

“ We continued until we reached a place where the narrow passage was blocked up by boulders and blocks that had given way and fallen down, quite filling up the narrow space. Here we could have forced our way. But a short distance farther on, a similar fall of rocks had taken place which could not be traversed without straining the forces of our animals too hard. And still higher up, my scouts reported the valley to be absolutely impracticable. ” 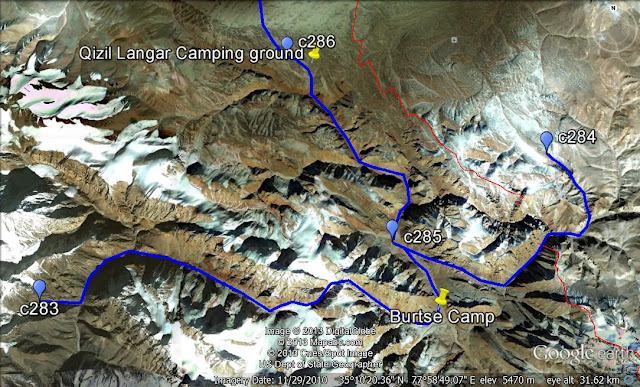 I have quoted this passage from Hedin's travelogue, to highlight just one important fact, that he found it almost impracticable to break through the mountain range, east of Burtse camp. This mountain range is part of the easternmost branch of Karakoram range, separating Aksaichin region from Ladakh. This really means that the present Burtse camp of the Indian army remains perfectly isolated and well protected from east.

From camp 285, Hedin moved northwards along Depsang nala and set up camp 286 near Qizil Langer Camping ground. On next day he crossed the Depsang pass and turned towards northeast; setting up his camp 287 at a location that is east of present line of control or LOC.

Hedin describes this region in these words:

“On December 24th, our march continues N. E. for 15.4 km. From Qizil Langar
the direction is north and the distance to the Dapsang Pass of the northern Karakorum Range is 4 km. The ascent on this stretch is from 5,128 m. to 5,428 m. or 300 m., being at a rate of i : 13.3. On the other, or Chang-tang side, we have 11 km. to Camp 277, where the height is 5,227 m. or a fall of 201 m.,
being a rate of i : 54.7. From Qizil Langar the road is comparatively easy on the slopes of the right side hills of the uppermost part of the valley. They consist of soft red material. There are the tracks of many caravans to and from Eastern Turkistan, and there are, as hitherto, the carcasses of many dead ponies.” 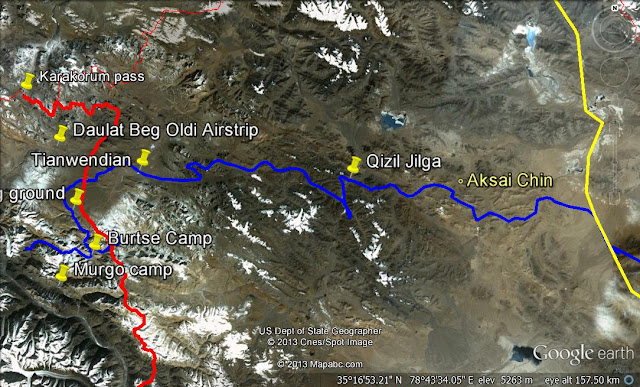 Hedin, from this point of time, onwards, was in a territory, presently held by Chinese and hence his description of the topography becomes rather relevant for us. Making a dash towards east from here, Hedin reached camp 301 right on the bank of the great lake of Aksaichin, on 9th January 2008. Since Hedin's team took some diversions and also took couple of days of rest, it can be safely assumed that he covered this distance in about 11 marching days. The straight line distance between camp 287 and 301 is about 132 Km and on road it could be well above 200 Km. 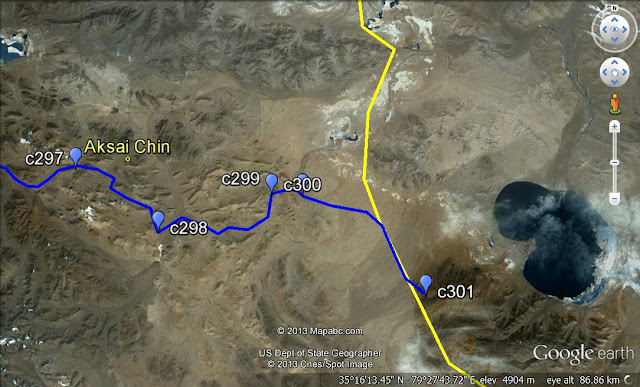 Hedin's route near Xinjiang-Tibet highway; he encountered 3 passes near camps 297,298 and 299; Highway is shown in yellow line; large blue patch on right is the great lake of Aksaichin.

Hedin encountered only three minor passes over this journey, near camps 297,298 and 299, which were all in vicinity of Aksaichin lake. Hedin describes this journey as through one single latitudinal valley of tectonic origin. While describing the landscape, he adds:

“The ground is very even and comfortable. Here and there watercourses, filled with snow, are crossed. The valley is straight and regular, bounded on both sides by black mountains of no great height and with patches of snow. Through the openings of two or three side valleys from the south, higher ridges and peaks are visible, completely covered with snow, but not forming continuous ranges. The soil is partly gravel, partly yellow earth and dust, which, judging from
systems of crevices, is soft and floating in the summer. The footprints of antelopes are deep, showing that the light animals had trodden the ground before it was frozen.”

I think that readers by now must have got a fairly good idea about the topography of the region, east of Depsang plateau.

Panorama towards southwest; drawn from a spot near Aksaichin lake

Now coming back to our main story, the present Tibet-Xinjiang road crosses Hedin's track, between camp 300 and camp 301, located near the great lake. Or in other words, Hedin's team had covered the distance between present LOC on Depsang plains to Tibet – Xinjiang highway in just 11 marching days carrying along with them their entire paraphernalia of tents, servants and baggage carried on horses and mules. For a modern, mechanized army unit, this distance can be covered in much less time.

It can be disputed that whether this can be considered as huge strategic risk or not, but considering the way in which Chinese have gone about sealing the Xinjiang-Tibet highway from any possible approaches from west in 1962, they perhaps now consider this as a big gap in their defense and must be consolidating their defenses along this route. The present Chinese incursion appears to have taken place exactly in the vicinity of the spot, where Hedin's track cuts the LOC.

India has undertaken a major drive to build up infrastructure in the border areas and from Chinese point of view, sealing of approaches on Depsang plains could have become an important issue under the circustances. Going by 1962 experience, Chinese would ideally like to push back the Indians to Shoyok river in west, north bank of chipchap river in north and to Burtse camp in south. This may not be possible now, as Indian army is in much stronger position. Chinese incursion in April 2013 could be considered therefore as a strengthening attempt of their defenses along Hedin's track.

Regarding timing of this action, it is really difficult to hazard a guess. But Chinese have been observed following their Military goals rather objectively and according to a plan. I would not consider this action as a decision taken at a lower level, without knowledge of superiors. The action must have been as per a plan.

I am afraid that in future we may see more and more such incursions in this region, till Chinese are convinced that the approaches to Xinjiang-Tibet highway, are all secured. India would have to guard against this in future. Only permanent solution to this problem is to finalize and mark the LOC line on Depsang plains and formally agree to it till a final and permanent settlement of the Ladakh-Tibet border problem is found.