A street fight on way to mount Everest? 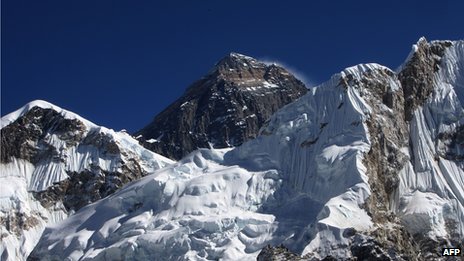 Imagine yourself walking in a crowded Bazaar street in India. What would you encounter? Firstly lots lots of people from all sorts of places. In a city like Mumbai you might even encounter people from all corners of the earth. Second thing that you would notice would be garbage heaps everywhere that have not been cleared as yet. As you manage your way out of these obstacles, you are sure to witness couple of street brawls for reasons that could extend from parking to money transactions with police investigating the incidents.

But, If I tell you that one is likely to encounter similar kind of obstacles and scenes, when on way to one of the most challenging adventures that a man can undertake today? You would surely not believe me. However, I am not pulling a fast one and this is what three climbers experienced recently while trying to climb the tallest mountain on earth, Mount Everest.

Let us go in little details. Attempting to climb mount Everest is almost becoming like a popular adventure sport now. In 2012 alone, 683 climbers from 34 countries attempted to climb the mountain. But, a sad reminder, that it is no amusement park ride, comes from the fact that 11 climbers met their end in 2012 while making this attempt. You can get some idea how crowded the Everest climb route has become.

Now about the garbage? There are heaps and heaps of litter and trash lying along the entire route to top of the mountain. This litter has been generated by generations of climbers, who have been trying to climb this greatest challenge for the mankind. Because of the extremely cold conditions, this litter remains intact as left by the climbers, and does not deteriorate or decompose at all. There are even some dead bodies of the climbers and Sherpas, who have died in previous expeditions. The situation has become so bad that the route to Mt. Everest has become a garbage dump at some places, where almost all climbers usually have their camps. 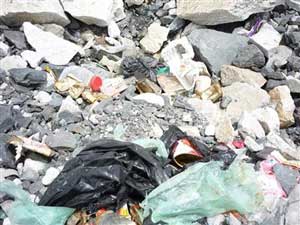 In 2011-12, an art group, Da Mind Tree from Nepali capital Kathmandu, collected about 1.5 tons of garbage, which included empty oxygen bottles, gas canisters, food cans, torn tents, ropes, crampons, boots, plates, twisted aluminum ladders and torn plastic bags dumped by climbers over decades on the slopes of the world’s highest mountain. The trash was picked up from the mountain by Sherpa climbers in 2011 and earlier part of 2012. It was brought down to Kathmandu by porters and trains of long-haired animals known as yaks.

Even though, the climb route to Everest peak remained crowded and incredibly dirty last year, the climbers and Sherpas, behaved nicely and politely with each other, helping any one in need. Even this positive aspect seems to be changing now. A three man climbing team that included Switzerland's Ueli Steck, Simone Moro from Italy and a Briton Jonathan Griffith were recently making an attempt on mount Everest and were nearing camp III at an height of 7,470m (24,500ft), when this incident happened.

These climbers came across a group of Sherpas, who were laying fixed ropes on the mountains. The Sherpas told the climbers to hold their climb as there were chances of icefall due to their climb. The pair of climbers completely ignored Sherpa's orders and continued climbing as a result of which, Sherpas were hit with some ice falling. One of the Sherpa was hit by chunks of ice. 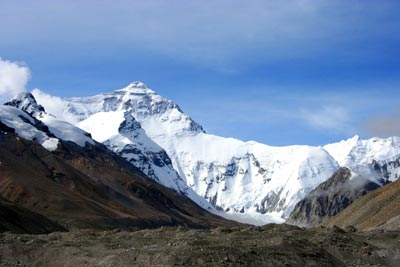 The climbers continued to Camp Three but later descended to Camp Two and were surprised to find a mob of about 100 angry Sherpas, waiting for them. They were extremely agitated and became instantly aggressive and punched and kicked the climbers and also started throwing rocks at them. According to climbers, one of the Sherpas, who was hit by an ice chunk, even through his knife at Mr. Moro, which hit his backpack. The Sherpas also threatened to kill the climbers if they did not leave the camp.

Finally peace was brokered by leaders of various climbing teams collected at base camp. The climbers say that Sherpas might have been offended because their pride was damaged as the climbers were moving unroped and much faster. A reasoning, that seems very difficult to believe as Sherpas are known to be very kind and considerate and their behaviour is always very professional. Sherpa's side of the story of this brawl is not yet known but Nepali Police are believed to be investigating the brawl.

Whatever may be the outcome of the inquiry, the fact remains that times are surely changing in Nepal. European climbers can no longer go around and treat Sherpas in old colonial ways. They would have to treat them with respect that is due to be given to guides and local experts.