Trouble from down under 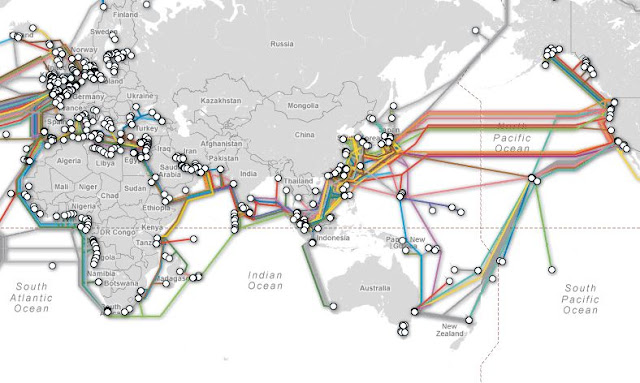 My website, which you are reading now, is actually hosted on a server provided by Google Inc. in California. Have you ever wondered, how I upload the content to this server, so far away from India or how your computer, which could be located anywhere in the world, actually connects to this server in California and downloads the content from this server. The answer is rather simple and you know it; its by means of the internet using data in form of binary signals. So far so good, but are you aware, how this data is physically transferred from servers that are located in different countries, thousands of miles apart.

This transfer is primarily done by a network of submarine optical fiber cables lying on the sea beds of almost all the major seas, which carry almost 99% of all international internet traffic. Talking about India, there are two major cable routes that connect India to the world. The westerly route connects India to Europe via middle east, Egypt, Europe and the US. The easterly route connects India to United states via Singapore. On each route, there are number of cables that have been laid by various companies. One such westerly cable that connects India is the The South East Asia-Middle East-West Europe 4 (SEA-ME-WE 4) cable, which runs 12,500 miles from France to Singapore, with branches connecting telecommunication companies in Malaysia, Thailand, Bangladesh, India, Sri Lanka, Pakistan, United Arab Emirates, Saudi Arabia, Egypt, Italy, Tunisia and Algeria. 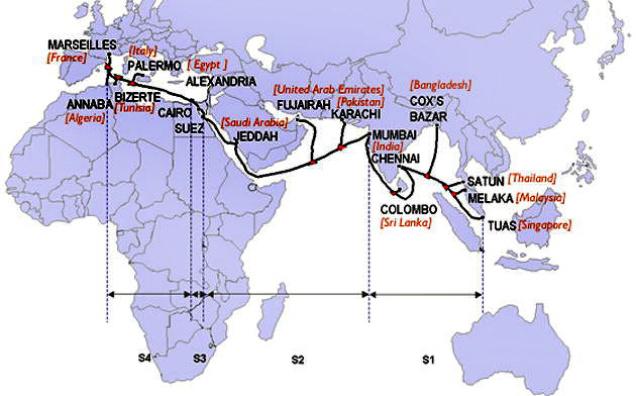 SEA-ME-WE 4 cable, stopped carrying traffic all of a sudden, at 6:20 UTC (11.50 AM, Indian Standard time) on Wednesday, 26th March 2013. SEA-ME-WE 4 is an important cable that carries almost a third of the traffic between Europe and Egypt. Doug Madory is a senior research engineer for Renesys, a company that monitors global internet activity by collecting data on how traffic is routed to different service providers around the world. In a tweet he explained how this outage affected countries, which included Kenya, Sudan, Tanzania, Uganda and Saudi Arabia. When a cable goes down, major Internet routers run by big telecom companies are designed to reroute traffic. But smaller networks, that are dependent on a sole large provider to the cable, could remain offline until it is fixed. This is what happened in Egypt with at least 614 networks, that connect to Telecom Egypt, reported not working.

Next day, The Express Tribune of Pakistan, reported that internet speed had slowed down by as much as 60 percent in Pakistan. Hundreds of smaller networks that connect to Pakistan's Transworld Associates network, were also down. Nearly 50 per cent of Pakistan’s internet traffic faced disruption. Pakistan is connected on internet with four undersea cables and as luck would have it, only two cables remained functioning. Another cable called IMEWE, (linking France to India via Alexandria and Suez) was already lost since 22 March 2013 and it was believed that a ship's anchor cut through that cable.

Egyptian naval forces then reported that they have arrested three scuba divers who they say were trying to cut an undersea cable off the port of Alexandria in Egypt. Egyptian coastguard put pictures of arrested men on its Facebook page showing three men tied up on board a boat, who were alleged that they were cutting an undersea cable partly owned by Telecom Egypt. The men were on a fishing boat.. Egyptians have not offered any details regarding identity of these men, for whom they were working and why they wanted to disrupt Egypt's internet communications. 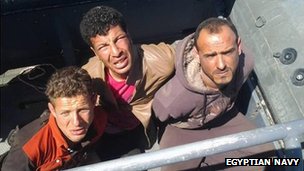 A world internet submarine cable map produced by the telecoms analysis company Telegeography shows that six cables come on land from sea at Alexandria. It now appears that this act of sabotage has been on much wider scale with four cables already down because of saw cuts. Earlier reports suggested cable breaks on four cables around Egypt - IMEWE (linking France to India via Alexandria and Suez), TE-North (owned by Telecom Egypt), EIG (Europe India Gateway) and SEA-ME-WE-3, a partner to the cable that was attacked on 26th March 2013. This brings up the total number of cables attacked to 5. It is obvious that this would cause significant interruptions to internet services all over Asia and Africa. 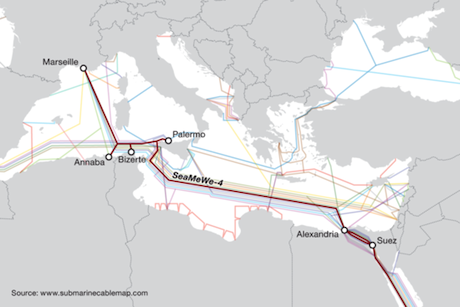 Indian telecoms companies have now reported on 1 st April 2013 a loss of speed because of these outages. India is somewhat better insulated, because it has in all eight communications cables that connect India to the rest of the world. The loss of three cables, namely SMW-4, IMEWE and EIG has certainly impacted services provided by Bharti Airtel, Tata Telecommunications, Reliance Communications and public sector service providers BSNL/MTNL as internet speeds are down and there is an effect on the overall traffic between India and Europe.

Not everyone agrees that this outage is due to sabotage. Seacom, an international private cabling systems company, that owns and operates submarine cables refuses to accept the sabotage theory. According to to the message posted by the company on its website:

“We think it is unlikely that the damage to our system was caused by sabotage. The reasons for this are the specific location, distance from shore, much greater depth, the presence of a large anchored vessel on the fault site, which appears to be the cause of the damage and other characteristics of the event.”

Undersea cables can break due to earthquakes or ship anchors. However this happens very rarely. That is why there are fewer than 10 ships only worldwide that are equipped to repair underseas cables. But if the allegation of sabotage is true, that is just staggering, says Doug Madory, whom I have mentioned above.

This outage has brought up one thing very clearly. It is the vulnerability of internet traffic to possible acts of sabotage. It would be necessary to take this matter up on international platforms and find solutions.