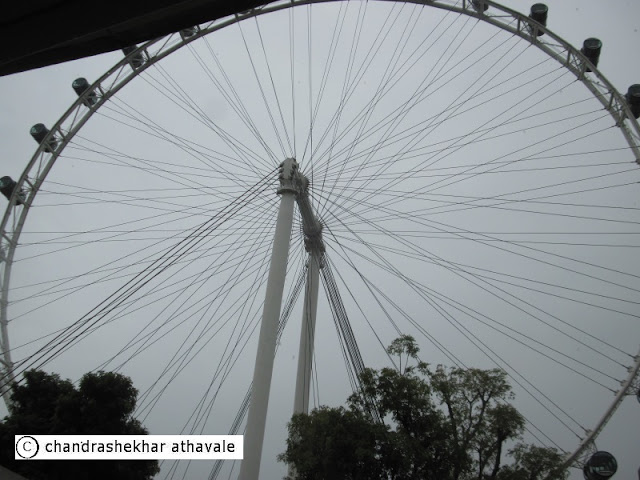 In the year 1893, a new form of fun machine was born when an American designer George Washington Gale Ferris, Jr. designed and constructed a 80 meter tall giant wheel at the World's Columbian Exposition in Chicago. This giant wheel structure consisted of a rotating upright wheel with passenger cars attached to the rim remained vertical due to force of gravity. The idea caught on all over the world and at every exhibition or amusement park a giant wheel became a must.

For last hundred and twenty years, giant wheels have dominated the amusement park scene as the most favourite carnival rides, whether in fairs, exhibitions and expositions or even in amusement parks. The giant wheels are now commonly known as Ferris wheels, perhaps to honour the inventor. In 1989, the city of Osaka in Japan first thought of erecting a permanent giant wheel as one of the tourist attractions and erected a wheel that was 112.5 meters tall. The idea was picked by many cities from the world with more and more permanent wheels getting erected in the cities. The famous Ferris wheel known as 'London Eye' having a height of 135 meters opened its rotating cars to the public in the year 2000.

The latest and tallest Ferris wheel, called Singapore Flier, opened up to public in 2008 and it has a height of 165 meters. Ever since it was opened, I had secretly wished that I would be able to have a ride in it on one of these days. However it took almost 4 years for me to fulfill my wish and I finally did it this week. All of us have experienced that unique sinking feeling in our stomachs, when we descend towards ground rather quickly. Our stomach suddenly feels very light because there is less force pushing on it. In fact, one of the main factors, which makes a roller-coaster ride so thrilling is this feeling in our stomachs; whenever we rapidly come down in a loop. I remembered the old Ferris wheels put up in fairs and exhibitions, where the cabs remained vertical only by means of gravity and the speed of rotation used to be fairly fast. Because of the speed, every time the cab started the downward journey, those old Giant wheels created a terrific sinking feeling in stomachs of the riders. With that experience, I had thought that coming down from 165 meters would be a memorable experience. 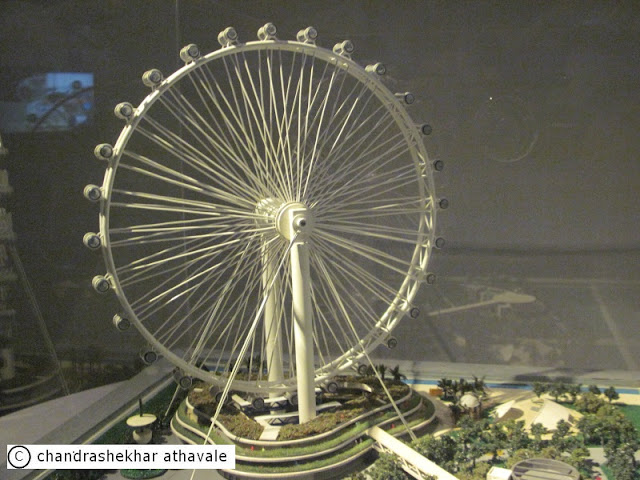 Singapore Ferris wheel is so large that the ride is called a flight, because the experience is somewhat similar to taking off and land in an aircraft. A single loop ride takes almost 30 minutes. Now, this wheel ride is no modest scale giant wheel set up at a fair or an exhibition. It is meant to be a great attraction for Singapore tourists. So they have provided special so called flights, creating special or almost exclusive experiences for the riders or fliers. Some of these include; World's First full Butler sky flight, where a rider can experience a culinary indulgence as they are served a four course dining menu dinner served by in-capsule butler. You complete 2 loops or have 1 hour to finish your dinner: Moet & Chandon Champagne Flight, where you can toast to life's best with some finest champagne: Singapore Cocktail flight, where they serve you a specially concocted cocktail, what is more, is that you can keep the cocktail glass as a souvenir: Instead of the cocktail, you can also have Singapore's special drink; the Sling: If you shun alcohol, how about a High tea Flight where you are served with assortment of finger sandwiches, muffins and macaroons, served with orange juice, freshly brewed coffee or Tea. For families with kids, there are Kids Birthday Party packages, where kids are entertained by games and ballons with special party meals and goodie bags. Finally, there is a Solemnization Package, where you can Solemnize your marriage in an romantically decorated private capsule. The package also includes a one night stay at the Ritz-Carlton Millenia hotel in Singapore. 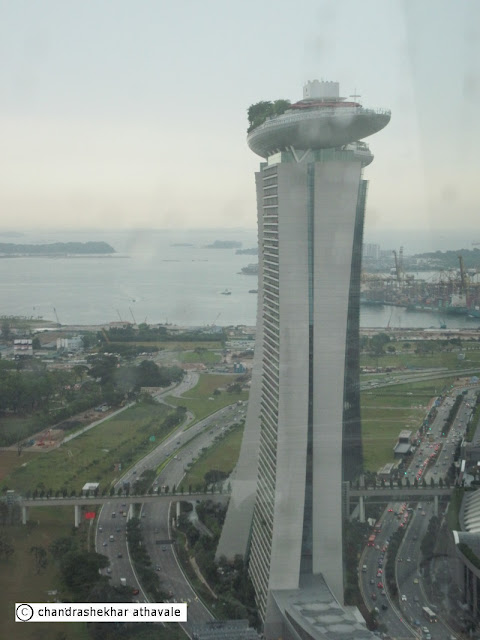 Though the dreams of such exclusive flights are mentally stimulating, there was no way, I would cope up with them either physically or financially. It was going to be just an economy ride for me with the family. The Singapore flier wheel is so huge that they have constructed a long passage even to approach the bottom rung of it and the entry platform. Just to create interest, some displays and slide shows of not much significance have been placed all along the way. Any way, no one seem to be showing much interest to them. 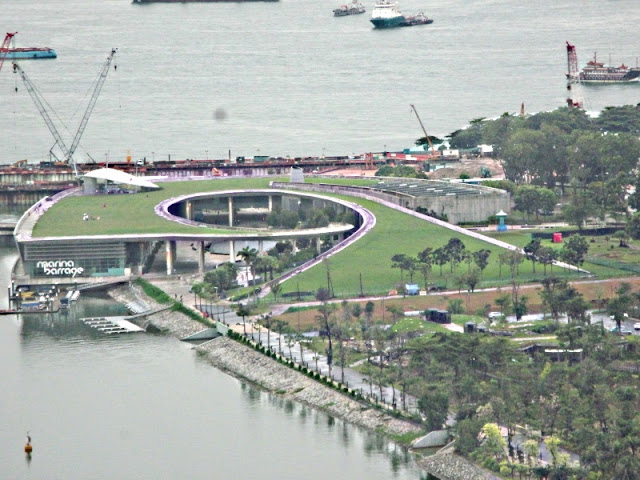 Singapore Ferris wheel has all the riding cars mounted on the outside of the rim, and electric motors independently rotate each car to keep it upright. Because of this arrangement, a cab stays vertical but the vertical positions keeps changing all the time. To facilitate the entry or exit, the rims of the platform on both sides of the wheel, from where you enter or alight from cabs, have been made circular to match the wheel itself. This gives about 15 to 20 seconds for each cab to take in the passengers or let them out. We found it pretty simple to enter the moving cab. Cabs are quite specious with two rows of benches in the middle. On all sides there are glass windows for observation.
The ascent is labouriously slow, as the cabs come above the level of the buildings with landing platforms, but soon afterwords, a fantastic panorama opens up before my eyes. I can see the old Marina bay, now being converted into a sweet water lake with a Barrage, the Kalang Garden on the other side of the bay, the new indoor stadium and the green patch of grass created above parking structure just near Marina Barrage. On the other side, the impressive business district cityscape called as CBD. On the side of it, the Singapore river and Durian shaped auditoriums of Esplande, the Fullerton hotel and the water vomiting imaginary animal called Merlion. Its all there. 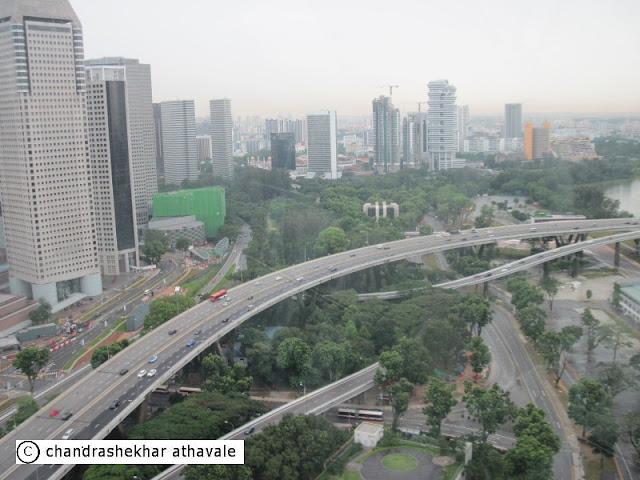 I just keep watching as the car reaches to the top of the wheel. I am anxiously waiting for the descent to start and await that exclusive sinking feeling. However great disappointment awaits me. The descent is so slow and gradual that I hardly feel any difference between ascent and descent. To make the ride glamourous, Singapore flier has made the ride so gentle and soft, robbing it of all the fun.
As I come out of the cab, I am happy that I have finally managed to take a ride in world's tallest wheel. Yet I miss the thrill and excitement, that small Ferris wheels from the fairs and exhibitions create with their rapid descent. But that is life, isn't it?
29th April 2013