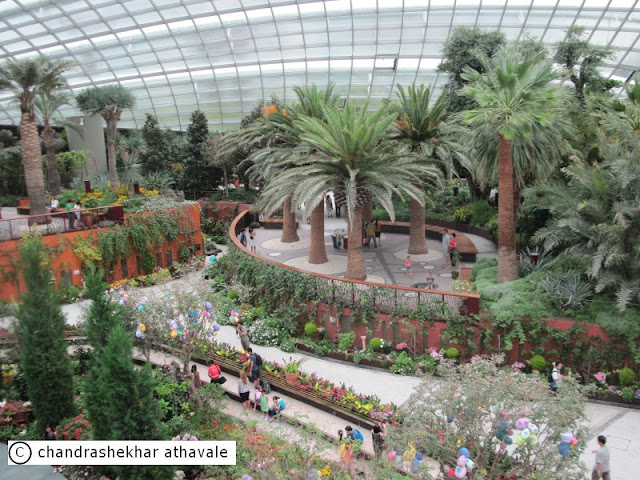 The Flower dome in Singapore's latest attraction, Gardens by the bay, is a huge columnless super structure, 38 meters high and sits on 1.2 hectors (about 3 acres) of reclaimed land. It has been fabricated with a steel grid that acts like an eggshell. There are 3332 panels of spectrally selective glass of 42 different shapes, which makes it look like a giant puzzle. Unlike cloud forest dome, this one is longish and looks like a giant snail.

The weather inside the flower dome is dehumidified and cooled to 22 degrees Celsius, creating an atmosphere of eternal or perpetual spring. The architects wanted originally to make it display plants and flowers from the Mediterranean-type climatic regions, where the temperature rises from 10 to 17 degrees Celsus and summer droughts last from three to six months. But as things finally turned out now, the dome displays flowering and other plants from five main regions of the world with similar kind of climate: the Mediterranean Basin, California, southern and western Australia, western cape of south Africa and central Chile.

As I enter the dome through the inner automatic doors, a stunning multilevel Panorama stretching to almost 360 degree opens up before my eyes. On my right, on an upper level I can see many varieties of cacti and a collection of succulent plants from deserts from all over the world. Just opposite me, on a lower level is a bewitching array of colourful displays of the Flower Field, which reflects different seasons, festivals and themes. On my left, there are all kind of trees on lowered as well as elevated platforms that come from specific regions of earth. 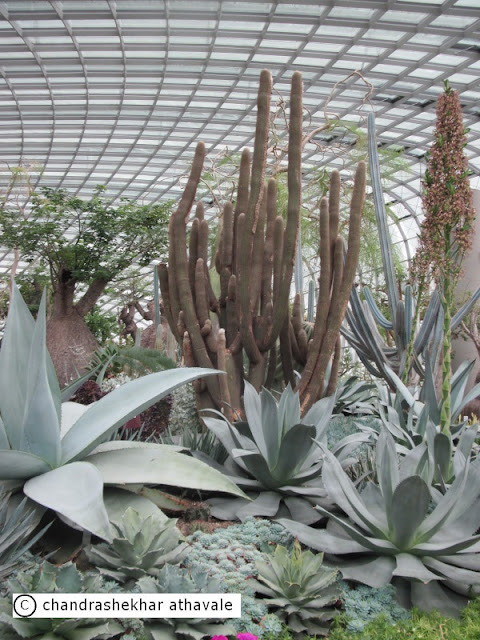 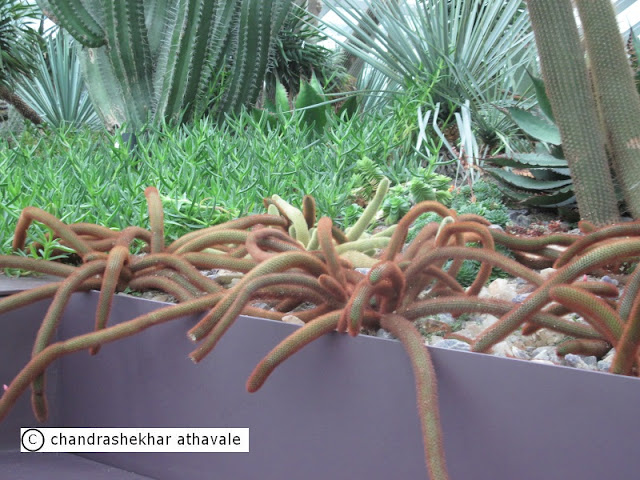 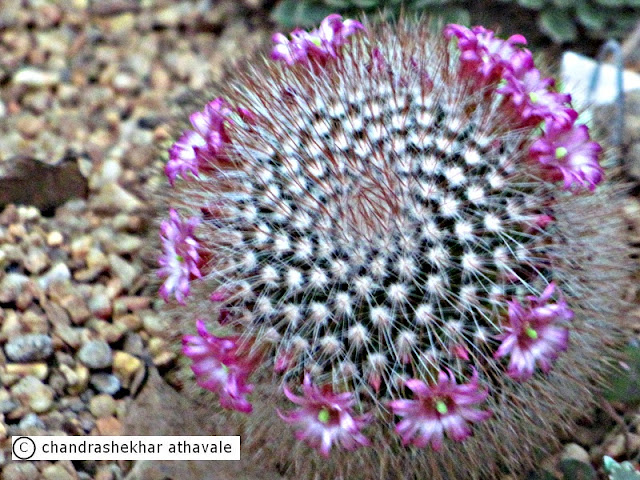 I turn right and start my visit to the dome from a range of Cacti and Succulent plants. Many years ago, our house garden in my home town of Pune, used to have a section devoted to Cacti brought from Americas by a friend. They are all gone now, but here in Singapore, in the Garden by the bay, I am able to see and recognize many of the Cacti varieties that we had in our house garden. These familiar varieties of Cacti somehow give me a feeling that I am actually meeting some long lost friends from my childhood. Some of the Cacti here have lovely flowers. I immediately recognize the common Cacti like Prickly Pear, Organ pipe and Pin cushion. A lonely Saguaro stands tall, flanked by few other strangely shaped trees known as 'Baobas.' The sign boards guide me to some exquisite varieties of Succulent plants with water filled stems and dangerous sharp spikes given to them for protection. These include South African Tree Grape ( Cyphostemma Juttae), Madagascan Club Foot ( Pachypodium lemarei) and Bolivian Wooly Cactus (Vatricania guentheri). 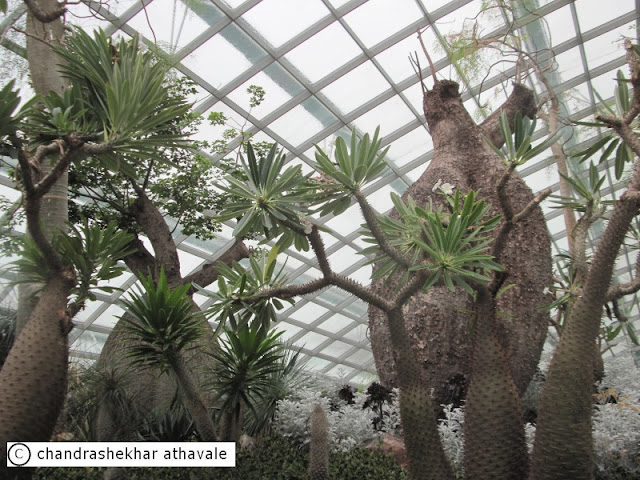 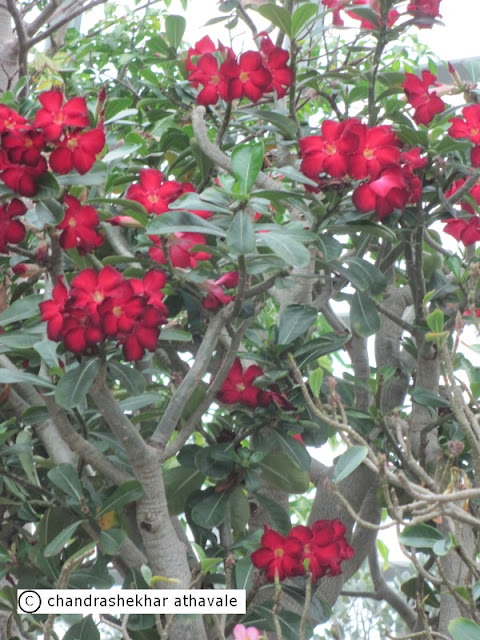 On other side of the aisle, there are funny looking trees that are bulky at the top and slim at the bottom, exactly the other way of normal trees. These are known as 'Baobas.' These funny looking trees actually carry huge water tanks at the top which may hold 1500 to 7500 liters of water to survive in long droughts. The varieties on display here include African Baobab from Senegal that weighs over 32 tons and Madagascan Ghost tree. 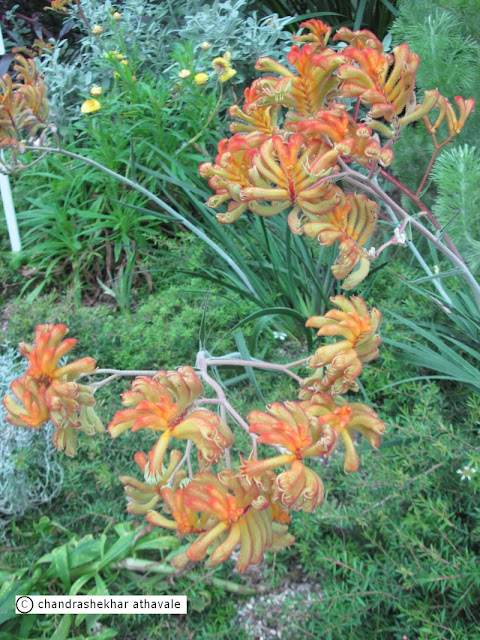 I return to the entry area and stroll to my left, to explore the plants displayed there. The first gallery I see is the Australian garden, which boasts of some of the most exotic species from down under, like Grass tree (Xanthorrhoea glauca), which can survive a bushfire, Queensland Bottle Tree ( Brachychiton rupestris) with it's huge belly and Kangaroo Paw ( Anigozanthos flavidus) with flowers that look like Kangaroo paws. 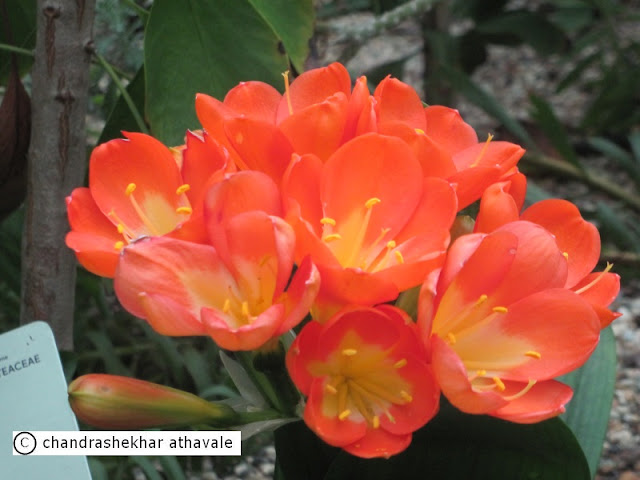 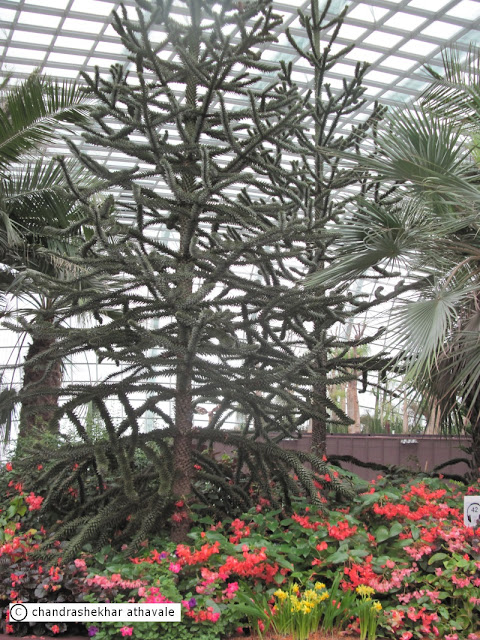 The next gallery has trees, shrubs and grasses from south Africa and is called as South African Garden. Some of the exquisite displays here include Tree Aloe ( Aloe barberae) related to Aloe Vera and King Super Bush ( Protea Cynaroides). It's lovely pink flower is South Africa's national flower. There are also many shrubs here that have sharp needle like leaves and which are known as 'Fynbos' in south Africa. Just opposite this gallery is the South American Garden with number of trees with large hulks. The exhibits include Chilean Wine Palms, whose palm nectar is used for wine making and Monkey Puzzle tree, whose branches grow in such weird way that even monkeys may find it tough to climb them.

Further along but on left and on an elevated platform are the lovely flowering shrubs from California. These include California Tree Poppy (Romneya coulteri) also known as Fried eggs flowers, beautiful purple blue California Lilacs (Ceanothus spp.) and Coral bells ( Heuchera species) that cover large tracts of ground. Opposite to Californian Garden is the Olive grove with its Olive (Olea europaea), Turkish fig (Ficus carica) and Pomegranate ( Punica granatum) trees that can grow very old. 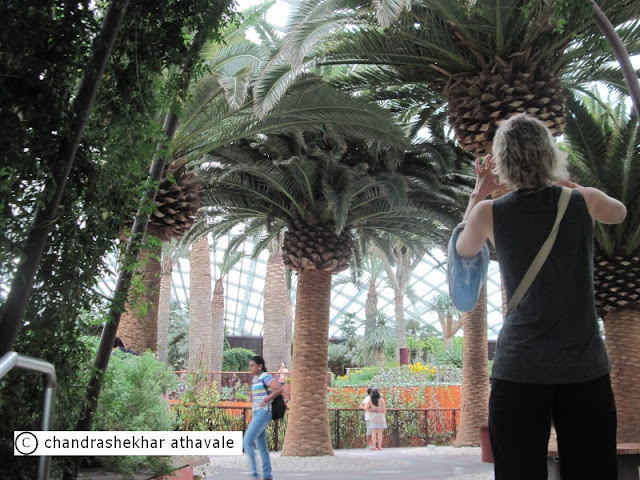 On right of Olive grove is the circular elevated gallery called as Mediterranean Garden. This has several fully grown Date Palm ( Phoenix dactylifera) trees found around Oases of the Sahara desert famous for its fruit; dates. There is also a solitary Cork Oak ( Quercus suber) tree along with a Dragon's blood tree (Dracaena suber), whose resin produces a blood red colour. 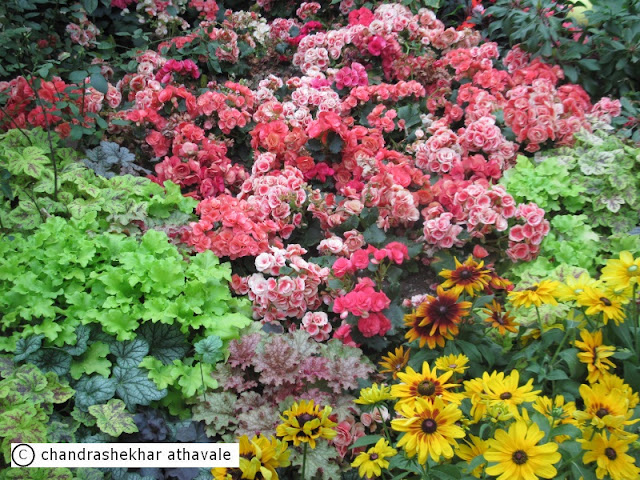 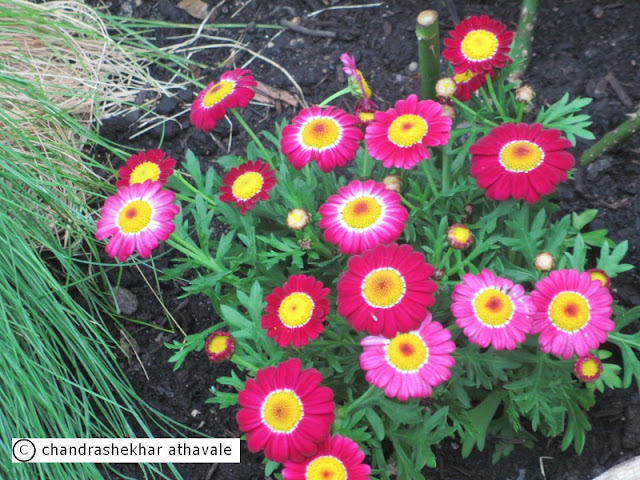 I go round the Mediterranean garden and on the other side is a large floor area covered with plants blossoming with flowers of all shapes, hues and shades. There are creepers and climbers on the walls. The few types of flowers that I could recognize include, roses, tulips, dahlias, cosmos, gardenias and Xenias. The list could go on and on. It is one of the best flower displays that I have seen.

I walk out of the dome and realize that I have spent more than 3 hours watching the domes. The Gardens by the bay have many more attractions like supertrees and heritage gardens. There is even a tree top skyway. I decide to break for lunch and march to a nearby sandwich bar called Cafe Crema. While having my lunch, my thoughts are still centered on these two conservatories I have just visited. They are, without least doubt, grand spectacles achieved with lot of hi-tech excellence, but when Singapore can boast so much of its natural beauty, endowed by nature to it in plentiful measures, aren't they really unnecessary? Some people in Singapore seem to believe so. This is one reaction from a local resident, I found on net.

“I am from Singapore, not very impressed by these 'snails' that grew out of reclaimed land. Greenhouses with mediterranean plants & tropical plants, no matter how good the green technologies, it is going to be unsustainable. Why do we need to contain & dictate nature? Why not preserve more of our primary forests instead? the artificial trees, sadly, do not remind us of the tropical rainforest at all. (..a roof-top bar again?!)

It is sad that our future environment is going to be made of structures like these & maybe soon we will no longer remember how nature looks like anymore.”

(I must confess that I am no botanist and do not know names of most of the trees and flowers and obviously have never before heard of their Latin names. My source of information is the sign boards displayed by the garden management and a nice booklet published by them.)