Singapore's Gardens by the bay: Celebrating nature with Hi-Tech excellence; Part I 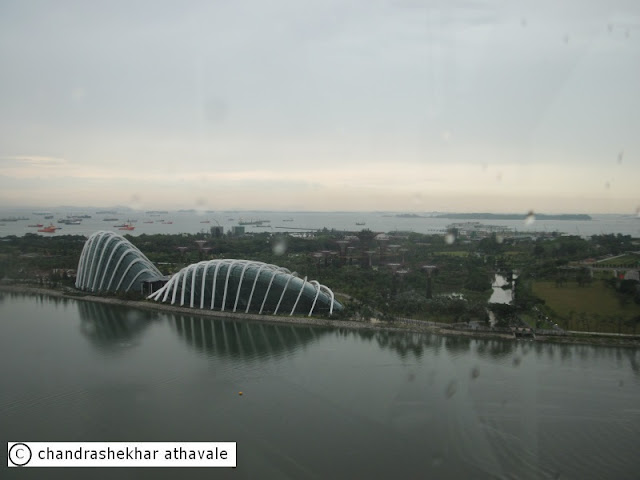 The bounty of nature that awaits a visitor in any of the tropical countries of the world is perhaps the first striking feature of his visit to the tropics. Singapore in spite of being a metropolis is no exception. If you leave a patch of land unattended here, within few weeks it would get converted into a beautiful lush green meadow and if left unattended for few years, the chances are there that a regular tropical rainforest would grow there. I always feel that Singapore or for that matter any of the tropical countries with their fantastic range and array of flora and green foliage are the best examples of celebration by nature.

Singapore lately has been shading some of its fabulous green covers, in its quest for becoming one of the leading cities of the world. Whether due to a feeling of guilt, that they are robbing from people their natural wealth given to them by mother nature or just for the official reason given by the city planners, that they want to create a city in a Garden, a new mega garden project has come up in Singapore, aptly called as 'Gardens by the bay.'

Singapore had till a decade ago a marshy, unused bay with a beach on it's east coast, known as Marina Bay. I remember having visited it about a decade ago. Though a metro rail MRT station existed there since long, there was hardly anything there at that time that could enthuse a visitor. There were few shops and eateries and a flat marshy wasteland leading to a beach. About six or seven years ago, Government decided to convert this bay into a sweet water lake and built a barrage through which water could only overflow to the sea. On the other shore of this bay, there already existed a garden known as Kalang garden, but the shores on east and south remained undeveloped. In January 2006, an international master plan design competition was launched to seek world-class design ideas for Gardens by the Bay. It drew more than 70 entries submitted by 170 firms, from over 24 countries, including 35 from Singapore. An 11-member Jury comprising local and international experts shortlisted eight teams and two winners were announced in September 2006; namely Grant Associates for Bay South and Gustafson Porter for Bay East, both from the UK.

The Ground breaking was held in November 2007 for Bay South Gardens, after which, development of Bay East Gardens also commenced. Bay East underwent reinstatement works and was opened to the public in October 2011. Bay south garden was opened to public in June 2012 and remains as Singapore's latest attraction for tourists. 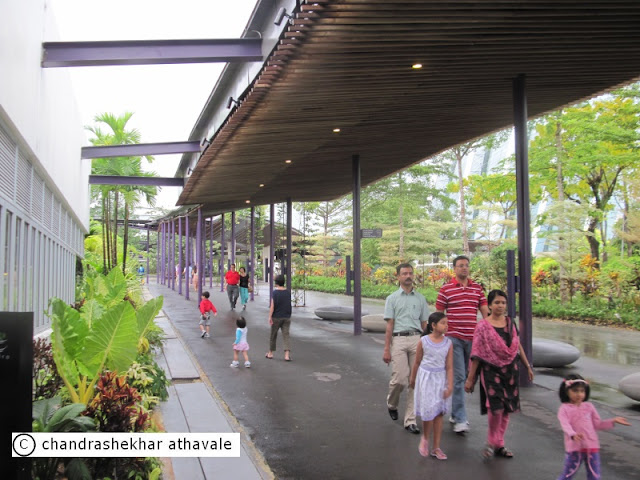 Like any other public place in Sigapore, South gardens also have a vast underground parking place complete with a lift available, which takes you straight to ticketing booths. It is however far cheaper to buy tickets on line as we have done. As I came out from the parking area lift, I see a long foot path covered with a weather shade, leading to the two main attractions of the south gardens. The landscaping around this foot path is done in a very aesthetic manner with a large central tower completely covered with creeper and climber plants blooming with flowers. A row of large sized seed shaped decorative rocks gives visitors a group photo opportunity. The covered path way, leads to a covered area in between two giant green house domes. In Singapore's weather, which usually alternates between blistering hot sun and torrential rain, this covered pathway and the covered area between these domes is a must. I can see plenty of steps for sitting down and a snack and drinks bar, in true Singapore style. There are some interesting giant structures here in this covered area. They resemble huge dried tree trunks, halfway eaten by termites. Huge ants made from stainless steel are seen roaming on the tree trunks. 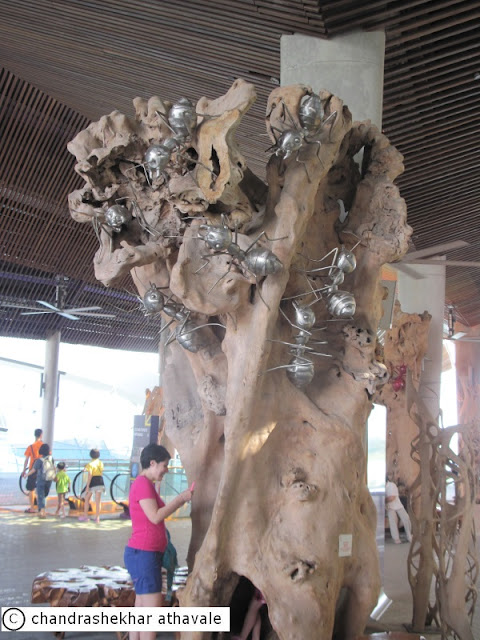 We decide to visit the green house dome on my right, called as 'Cloud forest' first. An escalator takes me down to the basement level, where the entry doors to this dome are located. With usual thoroughness, our tickets are checked with bar code scanners and we are let in. As the inner automatic doors open and the full inside details of the cloud forest dome come in my view, my first reaction is off total astonishment and awe. 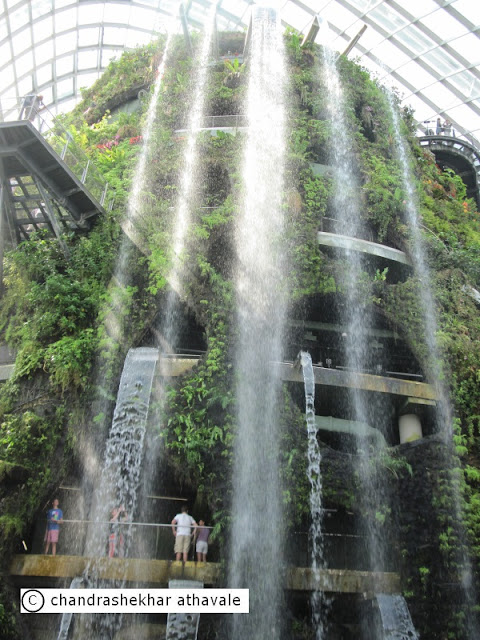 A huge 35 meter high waterfall is hitting the ground just ahead of me, sprinkling small droplets of water in the already misty moist weather inside the dome. The waterfall is coming from an edge of a central artificial mountain created in the middle of the dome and shaped like a sharp mountain peak. I start walking along the base of this mountain. The walls of the mountain are covered with lush vegetation, which shroud this tallest indoor waterfall of the world. These walls showcase plant life from tropical highlands up to 2,000-metres height above sea level. I can see a mixture of beautiful and fascinating orchids blooming with lovely flowers, delicate ferns, colourful bromeliads, whose leafs form cups that hold water and where many an insect survive, dazzling perennial flower plants called begonias and menacing carnivorous pitcher plants. All of these are epiphytic plants that live on top of other plants in nature, they hardly require any substrate for growing and are perfectly adapted for growing here on almost vertical walls of this artificial mountain. I have never seen before the carnivorous pitcher plants and they seem to have many varieties and colours here, some of them looking very ominous. There are also conifers like Swamp Cypress (Taxodium districhum) and Tasmanian tree fern ( Dicksonia antartica) brought in from Australia. 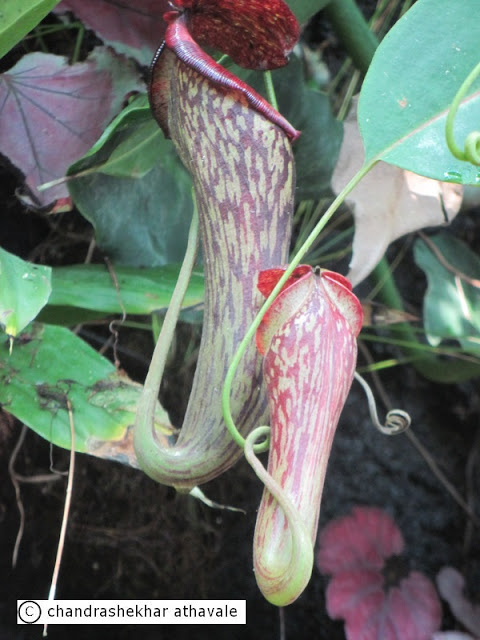 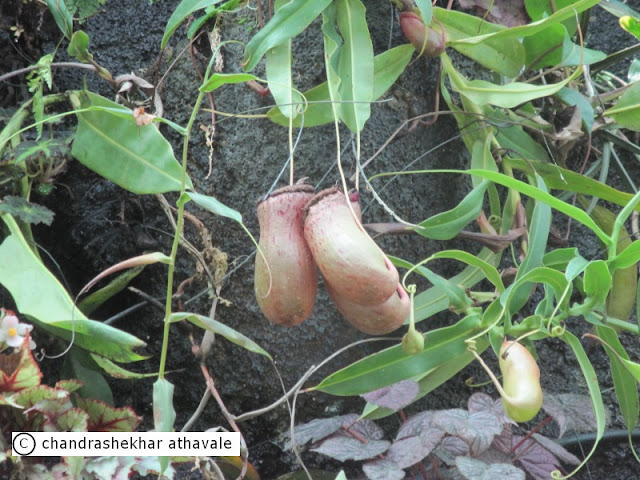 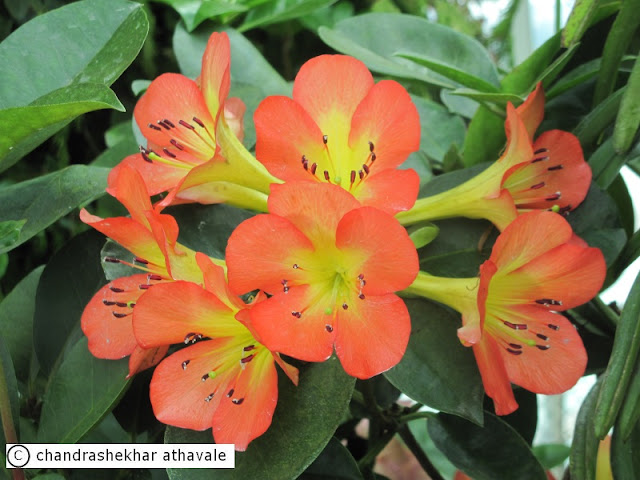 Soon I reach the half way point round the mountain base, where an arrow tells me that the way up is inside the mountain. They have high speed lifts, which take me to the top, where a small gallery called as 'The Lost World' has been constructed. I look outside. A superb view of Marina bay emerges through the mist inside the dome. The lost world gallery has many a plant species that have existed for Millions of years on earth. Most of the plants here have a wild wacky look with strange looking stems, carnivorous cups and none have large leaves. There are many a varieties of fern and some really exotic and rare plants like Pitcher palnts( Sarracenia spp.) Butterwort (Pinguicula spp.) Sundew (Drosera spp.) and Venus fly catcher (Dioaea muscipula.) They also have a miniature lake their at the center in true Japanese garden tradition, with small island, teeming with these strange looking bizarre plants. 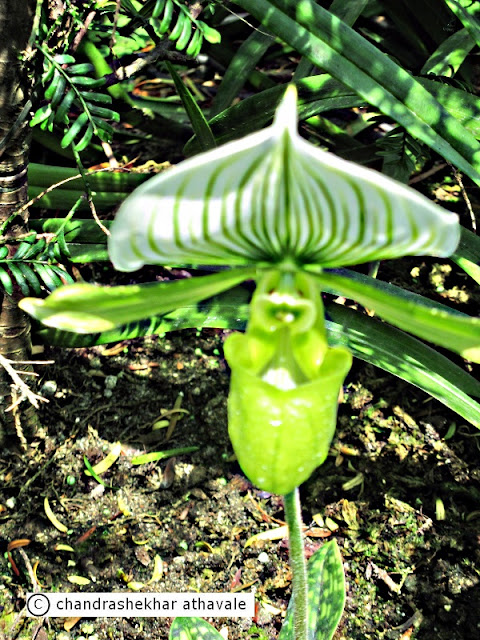 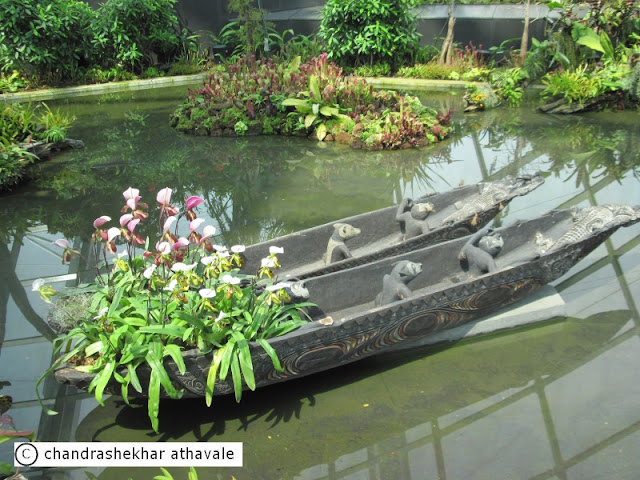 From the lost world a walkway emerges out in the middle of misty no where, and I continue to walk along it. I realize that this walk way is sloping down and would probably take me to the lower level. On the mountain wall on my left, I can see hundreds blood red Anthurium flowers, in their full glory. I recollect having seen these plants in a greenhouse on a coffee plantation in Coorg, south India. 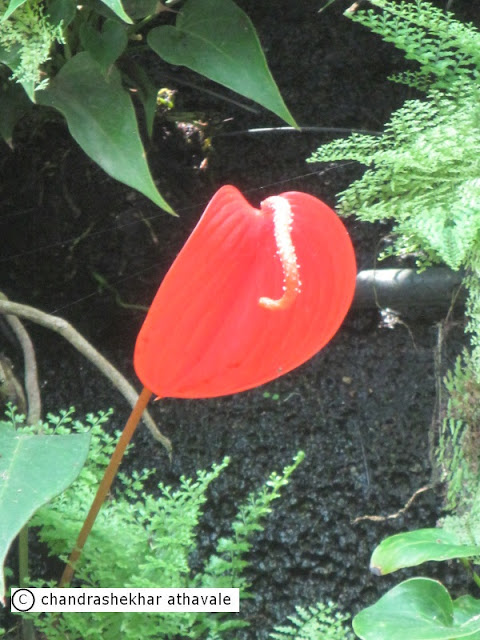 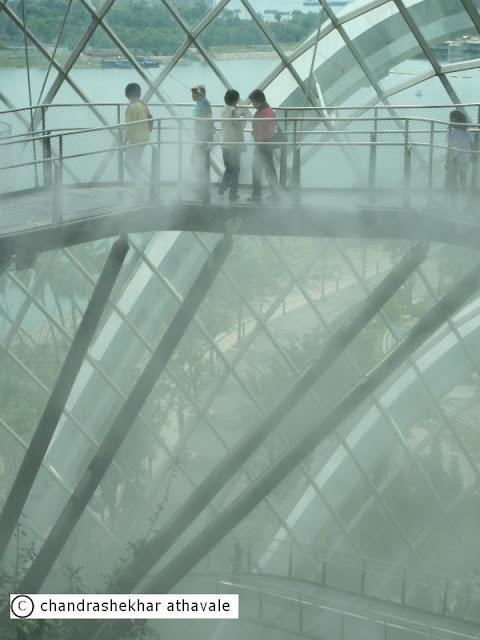 The misty walkway finally takes me to the interior of the mountain, from where I come down further to a large hall named as Crystal Mountain, which really a collection of weird shaped Lime stone pinnacles known as stalactites arranged in an impressive way and a lone stalagmite dropping down from a steel structure fixed in the ceiling. A walk way juts out of this hall and is called as treetop walk. I see a beautiful fully blown white Magnolia flower in it's majestic glory, which reminds me of my stay in California, where the entire street, where I lived, was lined with these Magnolia tress that produced such lovely fragrance when the white flowers bloomed. 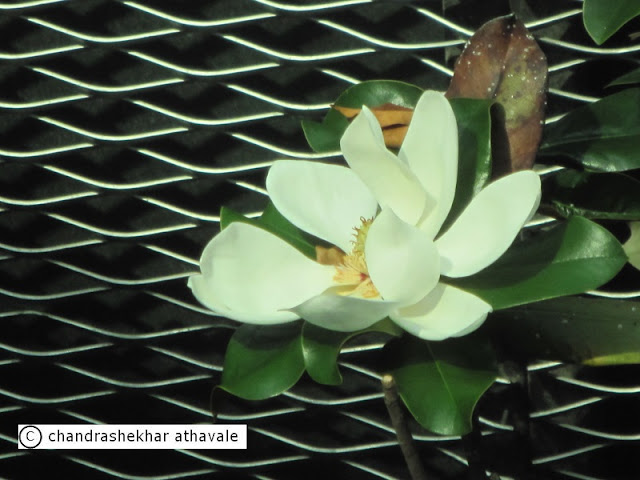 Further down, there are those mandatory kind of educational displays and shows about ill effects of pollution, greenhouse effect. I just skip through and come to a passageway named as secret garden, a world of bizarre looking plants and ferns like Swamp Cypress and Tasmanian Tree ferns and Black Tree ferns (Cibotium glaucum.) Pines, Gingkos and Cycads (Ceratozamia sp and Lepidozamia sp) , which exist since the Jurassic age, opens up.

I keep walking enjoying the flowers and the plants and see a sign board that says exit. My tour of this misty world is over. I come out and realize that I am little tired. I decide to relax in the central area with a cup of freshly brewed Earl Gray Tea. The next dome ahead is known as Flower dome and the fliers in my hand say that I would be enjoying some of world's finest flowering trees in there.