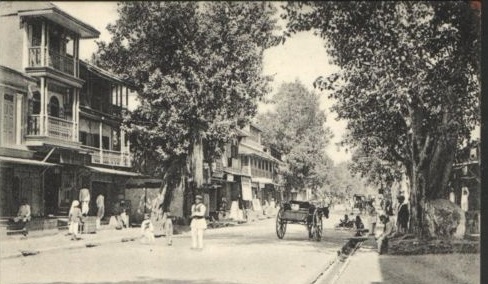 My home town Pune in India was a small city of about two or three hundred thousand people in 1950's. It was, even then, known as a bicycle city because almost everyone (at least male population) had a bicycle as the principal mode of transport. The trend continues even today with the sole difference that on today's Pune streets, hundreds of two wheelers that are seen are not bicycles but motor cycles. The public transport system of those days in Pune, comprised of few dilapidated rickety-rackety buses, which also holds true even today. Though the number of buses has increased by hundreds of times, they still remain the only and sole mode of public transport. There were no motorized taxis and for personal hire, two wheeled light carriages, driven by horses and known as 'Tangas' or 'Tongas' were available. Some noble and rich families used to have their own 4 wheeled buggy carriages, but they used to be very few.

Readers can therefor well imagine or appreciate a typical scene on the Pune city streets of those days, where hundreds of bicycles intermingled with occasional 'Tongas' would be plying on the roads. There used to be no foot paths on the roads and pedestrians also shared the same roads. To ride a bicycle in such kind of busy street, needed immense driving or riding skills. Pune bicycle riders were famous for that. It seems that they have passed on their skills now to the new generation of Motor cycle riders, who perhaps refuse to believe in their hearts that they are driving a more powerful and deadly vehicle and continue to drive their motor cycles in the same old dare devil fashion of their grand or grand grand fathers, but that is another story.

Pune city always had since the days of British Raj, a twin sister popularly known as Pune Camp or Pune Cantonment, where initially the soldiers and officers were stationed. They had their own motorized transports of second world war vintage and one would encounter these on the cantonment streets. These vehicles very rarely came to the city limits and for most of the Pune citizens, Pune camp was in some other far off world. In the fringe areas between the city and camp people of other communities stayed. These included Parsi's and Bohori's, who followed their own sub sect of Shia Islam and were followers of Prince Aga Khan. Parsi community always had deep pockets and mostly used to be affluent. They had their motorized vehicles in form of cars and motor cycles. 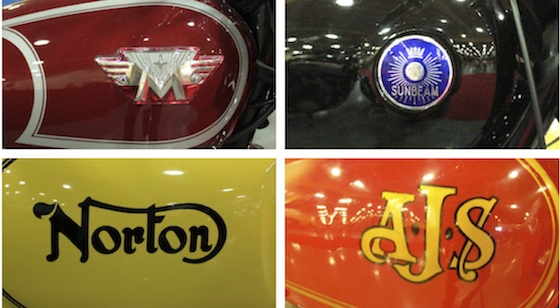 I have described the general scene in Pune here, because I want to introduce to the readers, the road beauties of those years, the super bikes or the super motor bikes to be exact. They used to be very few in numbers and the owners used to be extremely proud of them as they took them out for a ride. It would be needless to say that they were all except one exception, manufactured in England. All those super bikes had 4 stroke engines. I can still remember the rhythmical idling rant coming from those superb 4 stroke engines “ Thup....Thup.....Thup” and when they accelerated, the crazy feeling of power that they gave, even to the bystanders. They essentially came in three engine capacities, 250 or 350 cubic centimeters and 500 cubic centimetere. I find it little strange now, how engine capacities in those days were measured in cubic centimetere as India had still not adopted to the metric system and we were still in feet, inches, pounds and ounces. Even then, motor cycle and car engine capacities were somehow described always in cubic centimeters, strange isn't it? 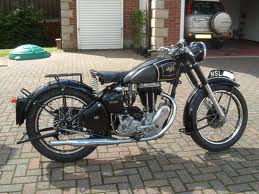 'Triumph' was one of the popular brands. So also Matchless/A.J.S. My father owned an A.J.S 250 CC bike and when I was young, I started my riding career with this bike. Another popular brand was Norton and many 500 CC Nortons had side cars two. The only brand from those years, that survives even today and still continues to be extremely popular was 'Royal Enfield.' It mostly survived the onslaught of scooters and 2 stroke engines, because of the patronage of the Indian Army. Strangely, even today, the only motor cycle brand that performs admirably in the Ladakh region of India, happens to be 'Royal Enfield.' About two years ago, during a visit to Ladakh, I met a group of motor cycle riders led by a lady, who were motor cycling in Ladakh. I had a chat with her and asked her, why they have chosen India made 'Royal Enfield' bikes, when they could have brought in any brand from the world. She had clearly told me that they are riding 'Royal Enfield' because these motor cycles perform best on high altitudes and have least maintenance problems. I was quite astonished by this but had to accept it as most of the co-riders in her group seem to agree. 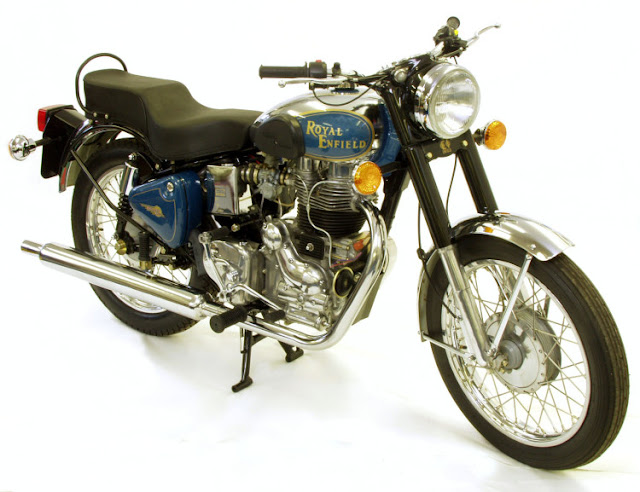 However the motor cycle brand that I then liked most was an exception to the supremacy of the British brands being a German brand. I remember very clearly that they were very few, perhaps 3 or 4 motor bikes of this great brand, which was none other than BMW. These bikes had twin cylinders that projected outwards at 180 degrees, unlike British brands, where there used to be single vertical cylinder. I still distinctly remember a particular BMW motor bike having 500 CC capacity with a bluish, grayiish toned body. The deafening sound as it accelerated, was like music for me those days. Those BMW bikes had a drive shaft instead of drive chains on British bikes and produced a comforting purring sound while idling. 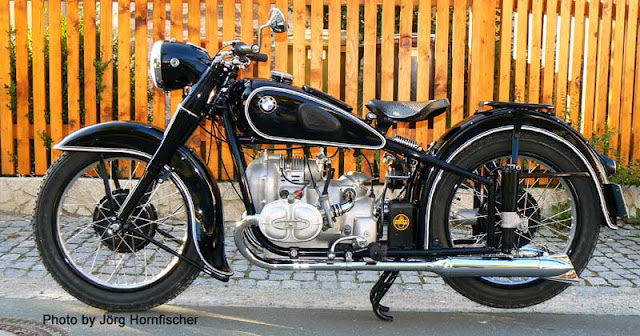 Later in 1960's, first Lambretta scooters appeared in the market followed by Vespa. Their convenience and over all economy, made them a winner and Motor cycles just faded from the scene, except their use by some die hard enthusiasts. Only much later or in 1980's, motor cycles made a come back, when Japanese Motor Bikes like Suzuki and Honda were introduced in India. During last 30 years, Motor cycles have again gained supremacy with new generation Motor bikes. The new motor bikes may be the epitomes of fuel economy and low maintenance costs. But if you ask me, may be I am getting nostalgic, but they don't even stand a chance when compared with the Superbikes of the 1950's, when we consider the feel, aura or the Royal splendour, these bikes brought with them to the owners.