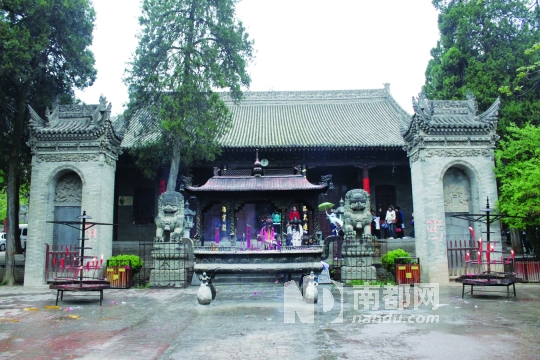 China like India is one of the very few countries of the world, that has history, which goes back for thousands of years. It has hundreds of heritage sites all over the country that can relate to it's long and chequered history.

Unfortunately, China lost a significant number of heritage sites and cultural relics during the decade-long Cultural Revolution of 1966 to 1976. Mao's war against so called 'Four Olds' ( habits, ideas, customs and culture) saw much destruction of these heritage sites and cultural relics. The after years again saw some resurgence in heritage preservation initiatives. Since last one decade, a new phenomenon has emerged again as a new threat to the heritage conservation efforts. The excessive commercialization of sites is now being done all over China as local authorities are taking up expensive renovation projects to attract investment and drive up tourism revenues. The heritage sites often become the first victims of such renovation drives. 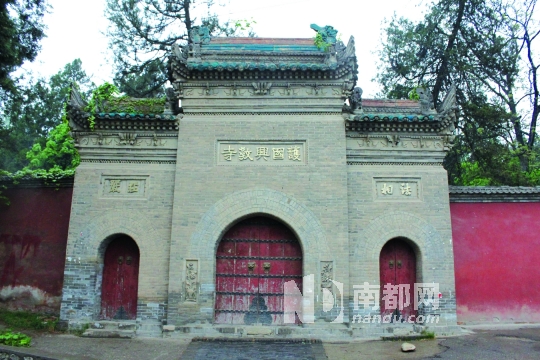 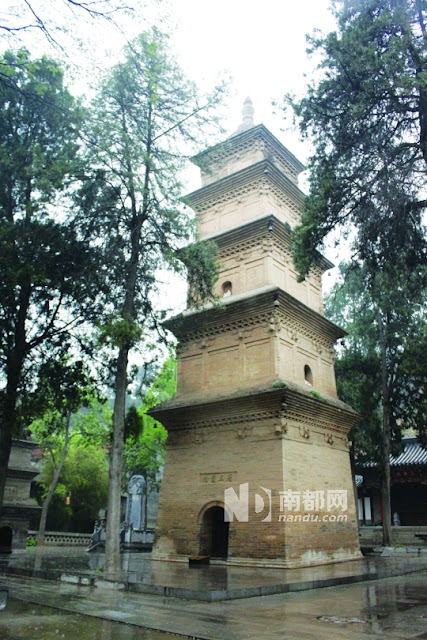 There is one heritage site however, which no one had dared to touch so far, not even the cultural revolution zealots of Chairman Mao. This heritage site is a 1300 year old temple known as 'Xingjiao temple' in city of Xian, Shaanxi province, an ancient capital city (then known as Chang’an) and thriving centre of Buddhist learning ever since. This temple complex has tombs of many eminent Buddhist monks, including that of the most famous Chinese monk ever; Xuan Zang. His earthly remains are believed to be kept here.

XuanZang, one of the most famous travelers of the ancient world, made an epic journey from his native China to South India and back, in the seventh century of our present era, to obtain original Buddhist scriptures in pure form and translated them in Chinese. His entire journey was made on land , unlike that of another famous Chinese traveler, Fa Hien, who also had traveled to India two centuries earlier by the land route, but had returned back to China by sea. XuanZang had left the then Chinese capital city of Xian sometime in 629 AD and could return back home only in 645 AD. 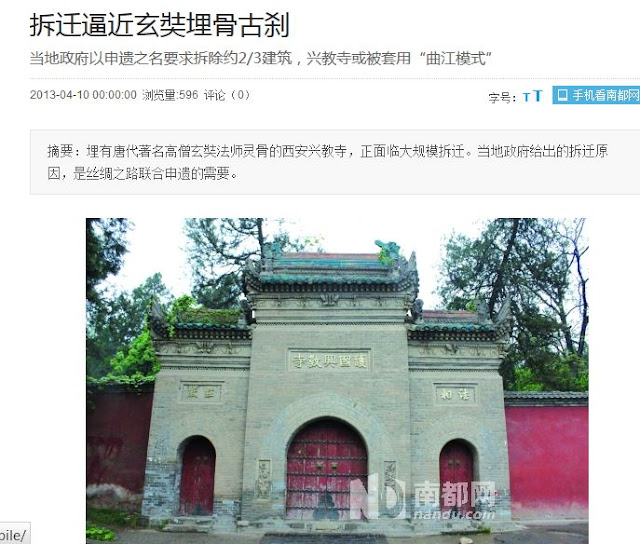 On 8th of April 2013, Southern Metropolis Daily, a Guangzhou-based newspaper, broke the news that the local government in Chang'an in Xian is planning to take up a project that involves demolishing and renovating parts of the temple including a dining hall and a dormitory. The local Government claimed that these buildings were not part of the original 1300-year old temple and are needed to be cleared to strengthen the temple's application for Unesco World Heritage status. the Southern Metropolis Daily report said:

“Some buildings will be demolished because it would make the environment more elegant, Zhang Ning, chief of Changan District’s Ethnic and Religious Affairs Bureau, told the newspaper. Almost two thirds of the buildings on temple grounds would be demolished, but the three towers, including one that houses a relic of XuanZang who died in 644, would be preserved. According to official documents, the world heritage application lists only the towers that were built in 669, the Daily said. Most of the surrounding buildings would not qualify because they were built in the 1920s, after the originals were destroyed in fires. After the planned demolition, Xingjiao's monks would be relocated to a nearby temple.”

The temple authorities, who had initially supported the application to obtain world heritage status were now trapped in a dilemma as they were told that as much as two-thirds of the building, including 80 rooms, from monk’s dormitories to dining halls, would have to be demolished to make room for greenery. They decided to wash their hands off the affair and announced on 11th April 2013 that they are withdrawing their participation in the provincial government's move to obtain the world heritage status. Temple spokesman Master Kuanshu told local journalists that he did not agree with the provincial government and said: "If they demolish the buildings under the current plan, it is still possible that the application will be vetoed by the international panel," The temple also wrote a response to the plan:

“The buildings gradually constructed throughout the years were built around the Xuanzang Tower. Therefore it is essential to preserve the integrity of the entire temple…The integrity and history of Xingjiao Temple would be destroyed if all the supporting buildings were torn down." Temple abbot Kuan Chi also declared on the same day: “If there was no demolition, we would support the world heritage application. But if the plan includes demolition, we shall quit.”

When this report first came out, an outrage soon flared up all over Chinese media with many Chinese scholars, bloggers and media outlets expressing extreme anguish. Many netizens believed that the real motives behind this move by local Government is purely commercial and a state owned enterprise is involved in it. 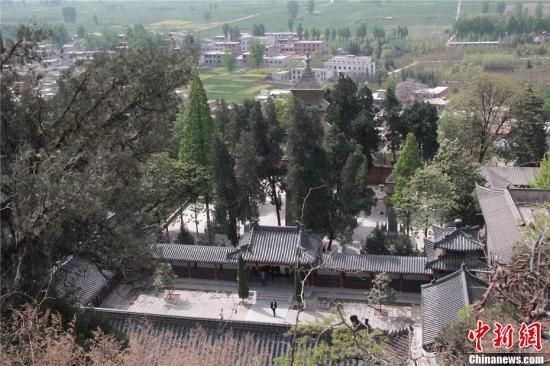 On 10th April 2013 that state-owned enterprise denied charges that it was behind the demolition plan in an effort to profit from redeveloping the temple and promoting it as a tourist attraction. The company has stopped participating in all relevant construction projects since January, a post said on its official Sina Weibo account.

Inspired by Xuan Zang and his 17-year pilgrimage to India for Buddhist scriptures. A Chinese classical novel titled as “Journey to the West” was written. Based on this novel, number of television series, movies and comics have been produced in China. In this novel, an hypothetical character of “The Monkey King” was introduced as a key character who accompanied Xuanzang in his travels.

A popular actor, Zhang Jinlai, who had played the part of Monkey king in a popular 1988 television drama :Journey to the West” decided to join the issue and started campaigning to save parts of an ancient Buddhist temple in Xian. He posted on Sina Weibo (Chinese Twitter):

“The Xian Xingjiao Temple which houses a relic of monk Xuanzang is facing large-scale demolition…As an actor I sincerely hope the religious affairs administration and other relevant government organs will co-ordinate [on the matter.”

Finally, recognizing the strong feelings of the people, China's religion watchdog, State Administration for Religious Affairs ordered religious authorities in Xi'an to investigate the case as reported by the media and consult local Buddhists before properly acting in line with relevant laws and policies. It is expected that the renovation project is unlikely to see light of the day.

This entire episode is highly enlightening or illuminating the way in which, Chinese internet users are bringing up issues that are socially relevant and pressurizing the authorities to act. In a totalitarian country, this kind power in the hands of people shows that things are changing in China.