Building a little Sun of our own

We all know that the Sun is our principal source of energy on earth. The energy mainly comes in form of Sun light to us but over Billions of years, solar energy also has managed to help in creating almost all fossil fuels like coal and crude oil, available to us. How does the Sun manages to perpetually create all this uninterrupted energy? According to scientists, this energy is created by a nuclear process known as fusion in which hydrogen nuclei, bound together by strong gravitational force, fuse in a chain of reactions to produce finally Helium. The actual reaction takes place in three steps. In the first step two protons (hydrogen nuclei) fuse to produce a deuterium ( a stable isotope of Hydrogen, nucleus of which contains an additional neutron) and a positron ( an electron like particle with a positive electrical charge.) In the second step this deuterium atom fuses with another hydrogen proton to produce a light isotope of Helium, He3. After these two steps are repeated, resultant two atoms of He3, further fuse to produce He4 atom and release 2 neutrons.

Many readers may might find all this atomic stuff rather tough to grasp, as I found myself. It would suffice for our purpose to understand that in a reaction, Hydrogen protons present in the Sun's core fuse to produce He4 atoms and while this conversion takes place, enormous amount of energy is given out, a miniscule part of which reaches us on earth.

So, can we build a micro Sun on earth, that can perhaps produce fusion energy, which we can convert into electrical energy that we use? The simple answer to this question is Yes! European Scientists have already built one such experimental Sun at Culham, UK, that produces 16 MW of fusion power. 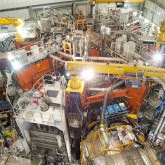 However, copying Suns's fusion process exactly on earth, faces one big hurdle. The temperature at which, above reactions take place are impractically high to achieve on earth. Scientists are therefore using in such fusion machines, another fusion reaction, between deuterium and Tritium atoms ( another stable isotope of Hydrogen having one proton and tow neutrons in its nucleus) which can take place at relatively lower temperatures. Such fusion machines have been named as Tokamaks, as they were originally discovered in the erstwhile Soviet Union (hence the Russian acronym), but now other countries of the world have caught up. In a Tokamak machine, a mixture of deuterium and tritium, is heated to temperatures in excess of 150 million degrees Celsius forming a hot plasma.

This brings us to another problem. There is no material available on earth that can contain safely hot plasma at 150 Million degrees Celsus before it can leak out. Scientists have solved this problem by a clever method, that is known as magnetic confinement, in which external and self generated magnetic fields hold the electrically charged plasma at relatively low densities, away from material walls for time periods of the order of a few seconds.

In a Tokamak, the charged plasma is confined to a shape that looks like an inflated rubber tube of a car wheel and is enclosed in a magnetic cage. The magnetic fields produced by the coils surrounding the plasma as well as by a current driven in the plasma itself, help in confining the hot plasma away from surrounding material walls. The plasma is heated to fusion relevant temperatures by injecting high energy neutral particle beam or radio frequency waves from outside which get absorbed in the plasma and heat it. Once the fusion reaction starts, the energy that is given out, comes out of the machine in the form of kinetic energy of the product particles and can be converted into electricity by conventional technologies. 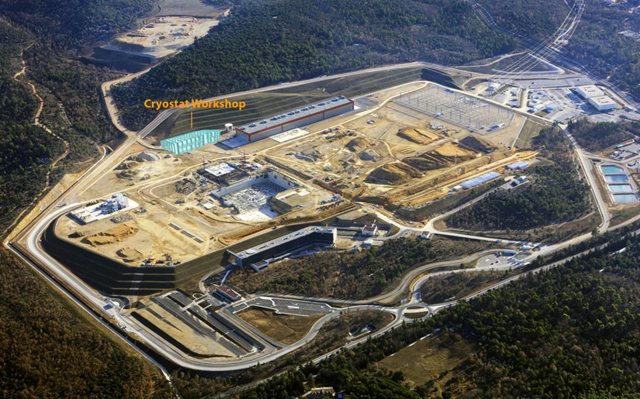 Using this technology, an international project has been launched by seven nations of the world; China, European Union, India, Japan, the Republic of Korea, the Russian Federation and the United States of America. The project is called as as ITER, meaning "the way" in Latin and is coming up at a 180 hectare ITER site in Cadarache, southern France. The main feature at this site would be a man-made level platform that would be 1 Km long and 400 metres wide and would occupy an area of 180 hectors or equivalent to 60 soccer fields. The entire Tokamak Building will be slightly taller than the Arc de Triumph in Paris. The Tokamak will weigh 23,000 tons and would generate a plasma volume of 840 Cubic Meters.

India joined the ITER project in 2005. Government then entrusted The Institute for Plasma Research (IPR) at Gandhinagar, Gujarat, to manage its participation. As per agreement, each and every member country of 7, have formed their domestic ITER organizations in their country. The strength of ITER-India now stands at 83 permanent and 10 contracted staff. Additionally, about 20 engineers hired from different engineering service companies work on the ITER-India premises. 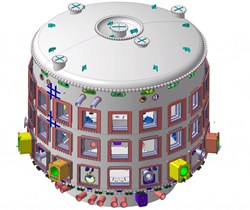 India has been entrusted with manufacture of the Cryostat assembly of the Tokamak. The cryostat is a large, stainless steel structure surrounding the vacuum vessel and superconducting magnets, providing a super-cool, vacuum environment. It is made up of a single wall cylindrical construction, reinforced by horizontal and vertical ribs. The cryostat is 29.3 metres tall and 28.6 metres wide. India's Larsen and Toubro Ltd, was awarded the contract for the fabrication and assembly of the ITER Cryostat in August 2012.

Beginning from December 2015, Cryostat's 54 segments, which are amongst the largest and heaviest components of the whole Tokamak assembly, will start arriving on site. They will have to be pre-assembled into four sections, before being transported to the main Assembly Building. 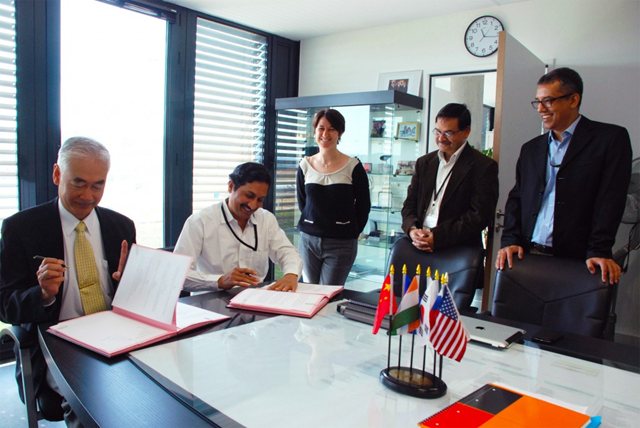 ITER and India sign an agreement to build the Cryostat shell

This week an agreement was signed by the ITER Organization in France and the Indian Domestic Agency under which a small area of the size of a football field was made available to the Indian Domestic Agency of the ITER project. In this area Indian domestic agency of ITER will build and operate a workshop to assemble the four pre assembly sections from 54 segments that would be arriving from India. ITER has named this area as Little India. Work on the steel-framed workshop should begin in the coming weeks. Once the building is completed, Larsen and Toubro Ltd, will have some 50 people on site, and many more, locally subcontracted, once the actual assembly work begins.

ITER project ranks as the most ambitious science endeavors of our times jointly undertaken by 7 major nations from earth. In all, 34 nations would be collaborating with the project. Buildings would start coming up in France in 2010 and ITER expects project's first plasma in November 2020.

The ITER Tokamak would generate temperatures inside, that would reach 10 times the temperature at the core of the Sun. With completion of the project, mankind would have finally succeeded in creating a Sun, even though of a Nano size, on the surface of the earth.