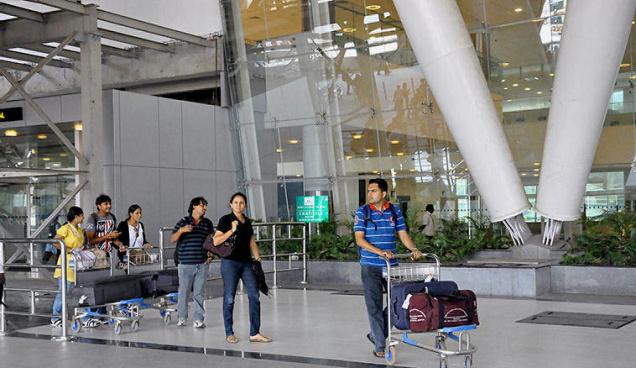 I can modestly boast of having travelled through many of the great airports of the world. Mighty airports of Hong Kong, O'Hare in Chicago, New York's JFK, Heathrow of London and the most efficient airport of them all; Changi airport in Singapore: I have seen them all. I have also been through many small airports like one at Bhuj or Tiruchirapalli in India, where hardly one or two flights land in a day. I am quite used to inefficiency and careless approach of administration of most of the airports in India towards air passengers and have become an expert in finding out my way through the bluster, bedlam and disorder that perennially exists at Indian airports.

My recent journey to Singapore, where my travel itinerary took me through Chennai airport, has now convinced me totally, that this airport, on any day would win top honours as a supreme confusion land. This does not mean that all other airports have orderly operating procedures and systems and do not bewilder the passengers. About 2 years before, I travelled through New Delhi airport's spanking new terminal 3. When we had reached the airport at 5 o'clock early morning, the 'check in' computer system had totally collapsed and we were being issued hand written boarding cards based on electronic ticket printouts, which we were carrying with us. I always wonder till this day, how they actually manged to put the right passengers on board of the right aircraft, which flew to the correct destination. But wonders do happen even today!

Coming back to my itinerary and Chennai airport, I knew very well that it was going to be a long long wait at Chennai because I had to spend almost 7 hours before catching my next flight to Singapore. Chennai is the fourth largest city in India with a population over 5 Million. Around 13 Million passengers pass through this airport every year and there are at least 325 aircraft movements every day at the airport. You can well imagine that Chennai's airport happens to be one of the high traffic airports in India. I had recently read about a spanking new passenger arrival lounge at the airport that was inaugurated only couple of weeks ago. The Airports Authority of India, claims to have constructed this new terminal at a cost of Rs 2,01 Billion. I was therefore expecting a pleasant and comfortable wait at the airport with modest expectations of at least minimum comforts.

The new terminal, no doubt is very impressive with its Aero Bridges, long passages with moving walkways ( which were closed down, when our flight landed) and in general a pleasant experience of international standards. My baggage took fairly long time to arrive on the belt. The airport is supposed to have battery operated tugs operated by a private contractor to carry the baggage from the aircraft to arrival hall. Since there is nothing unusual in this kind of long wait for the baggage ( I have experienced similar wait even at San Francisco international airport), I waited patiently and picked up my bag and put it on a baggage trolley. Since there were no sign boards indicating, where the international departure terminal is actually located, I had to ask number of people before I was guided correctly that this terminal is located at the other end of airport building and I would have to walk all the way there. Later, I found some battery operated carts meant for passengers but they were mostly carrying officials and airport people.

I started walking along with my baggage trolley. There were no sign boards for guidance and only way I could get guidance was by asking a number of people, who in general were friendly but offered limited help because they only knew Tamil and only a few words of English. Finally, after a long walk, I found the domestic departure terminal, then the old domestic arrival terminal( now lying empty and vacant), International arrivals terminal next and finally my destination; International departure terminal; with all these terminals in one line and a common passage along which, one needed to walk. A co-passenger later told me that pre paid taxi service to the city and other facilities still continue to be near old arrival hall and everyone has to have a long walk, because they now arrive at new terminal.
The time was around 3.30 PM, when I reached the International departures. My flight was scheduled for departure at 10 PM, which meant that I had to spend six and half hours at this terminal, for which I was mentally prepared no doubt. However, I had a shock, when the security guard politely told me that I can not enter the International departure terminal any time before 3 hours of scheduled time of my departure. Which in my case meant that I would not be allowed in before 7 PM. I asked the guard, as to where I should wait for next three and half hours, for which he had no answer. I then requested several airport officials and finally found out that I can wait in one of the small waiting areas adjoining the departure hall. I was lucky because later I found out number of passengers sitting on the ground in the common passage and on parapet walls.

The waiting area was just a small area marked with barricades and a single line of chairs near the wall. There were no facilities of any kind like drinking water or toilets. I managed somehow to kill more than 2 hours looking at the hurrying passengers and my watch alternatively. Around 6.30 I finally moved out and decided to have a bite before proceeding further. Unfortunately, at Chennai, there are no eateries around, except for one snack bar selling eats and drinks at astronomical prices. Someone then told me to go outside to car parking areas, where couple of eateries are available. I slugged out my trolly loaded with baggage all the way out and found a place selling nice south Indian stuff. I ordered some 'Idlies,' which turned out to be very fluffy and tasty. This was one place that was really good and turned out to be the only highlight of my journey.

I entered the international departures gate, checked in at the airline counter, went through emigration and mandatory security checks to arrive at the departure hall proper. A large area with number of duty free shops and kiosks selling books and some snack bars. Three flights were announced and I found number of airline officials going round the rows of chairs to find out if any of their passengers are sitting there. I was little bit amazed at this strange way of finding out missing checked in passengers.

A sign board declared that the departure hall had free Wi Fi. However, after making inquiries, I was told that the service is no longer available. I killed more time doing nothing till I found that the time was 9 PM. This meant that my flight, being an international flight, should have been announced by now. There were number of announcing boards for flight departures and TV monitors hung on pillars. Unfortunately most of them were not working. Now I knew, why airline officials were going round and round the row of chairs to locate their passengers. 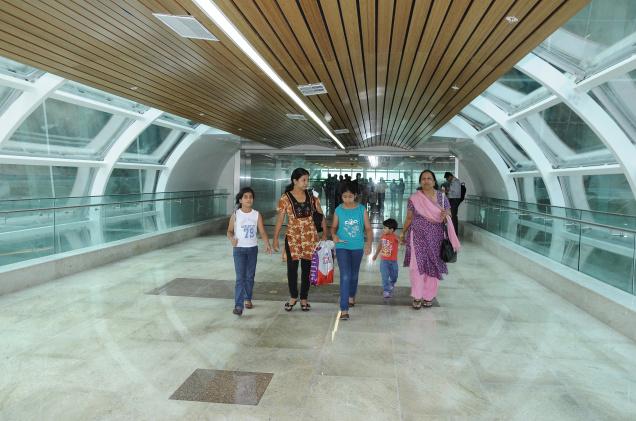 Getting little impatient, I started making inquiries about my flight, but no one knew anything. Suddenly I heard a faint announcement on the public address system about some flight for Singapore now being ready for departure and it would leave from gate 11. I started frantically looking for gate 11. Unfortunately the sign boards only gave directions to gates from number 12 onwards. I hurried across. One young man told me that gate 11 should be in a far corner. I found a sign board that directed me to gate 9, but no where, I found any trace of gate 11. Finally I asked a security person again about Gate 11. He confirmed that this is the place and I should proceed further. Relieved, I continued along a long passage which had signs which appeared totally confusing. I also crossed on my way some arriving passengers, who had alighted from some other aircraft. After making 'n' number of inquiries finally, I found the aero bridge, which claimed to be gate no. 9 as per the sign board, but security people confirmed that indeed this was gate 11 and I was at the right place. I was no doubt flabbergasted and failed to understand, how a gate, which all signboards proclaimed to be gate number 9, can actually be gate 11. But that is how Chennai airport works.

I was completely relieved, as I reached the aircraft and got seated. The aircraft was hardly filled. It was no wonder, considering the trouble I had to undertake to reach it. By miracle, in next half an hour, the plane gets filled with all passengers finally managing to find it. Now I knew perfectly well, why airline officials were frantically doing rounds and rounds of rows of chairs to locate their checked in passengers from the waiting crowd to send them to their respective planes. Poor blokes!

I have been through airports and airports over the years, but nothing beats Chennai airport of the present. It is definitely the greatest land of confusion; terre de confusion A La Grande.