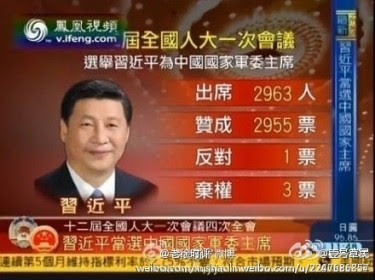 As widely expected, Mr. Xi Jinping was elected president of China this week by the National People's Congress. Since he was the only candidate in this cosmetic election, he polled 2955 'Yes' votes with 3 delegates abstaining and there was 1 'No' vote. Total number of delegates is supposed to be 2961.

Immediately afterwords, there was a flood of comments on 'Sina Weibo,' Chinese twitter like social media. The heated discussion was about the "mysterious voter" who had the courage to tick the 'no' box in the ballot paper in the poll. Other Chinese Internet sites and discussion forums also became agog with speculation on whether the solitary dissenter will be found out and punished. The first thing that was done by the censors after this was that the word “no vote” was removed from social media by authorities.

Some commentators pointed out to a similar 'No vote in the past and its disastrous consequences for the person, who gave this 'No Vote.' Mr. Zhang Dongsun, a philosopher and former CPPCC delegate had voted "no" in Mao Zedong’s election as head of the new communist government in 1949. Zhang had to pay high price for this no vote. He was later destroyed by Chairman Mao for his alleged actions. He was accused of selling national secrets a few years after Mao’s election, and expelled from the CPPCC. He was arrested at the age of 82 in 1968, two years into the Cultural Revolution. His family didn’t know where he was locked up until 1973, when they were notified by authorities that Zhang had died in Beijing's Qincheng prison. Of Zhang's three sons, two committed suicide during the Cultural Revolution, while his eldest son was arrested and tortured, according to some accounts.

On Sina Weibo, everybody started wondering whether the person will be punished horribly, as happened to the one "nay" vote against Mao Zedong. Or, whether this is a good sign for democracy that at least someone voted with his or her conscience, and didn't follow orders. There is also a theory that Xi voted against himself as a show of humility.

Soon afterwards, China's social media censors cracked down on discussion about the mysterious identity behind the lone vote cast against communist leader Xi Jinping‘s formal appointment as president and all discussions on the subject disappeared. Some shrewd, netizens had meanwhile, taken hard copies of the chatter or Weibo and released them later. 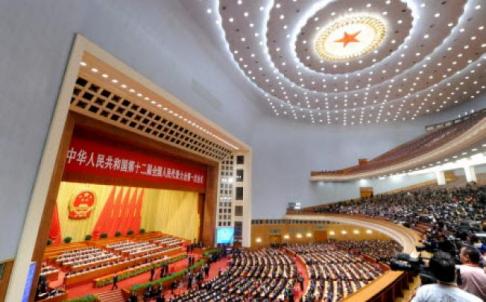 Zhang Lifen, a senior editor at the Financial Times, and editor in chief of its Chinese language Web site says: “This is some progress for China’s democracy,” and wonders why state media intentionally left out the tally in their coverage, “Were they embarrassed because the percentage was too high?”

Wall street journal called this election as 'Fake election.' Whatever it is, it provided few moments of amusement for outside world as well as Chinese netizens on Weibo, for sure.