The curse of pigs 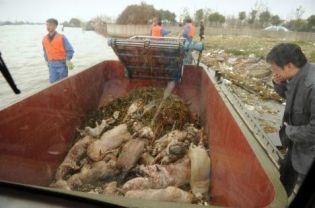 In China, they do everything on grand scale. A cursory look at Beijing's Tienanmen square should suffice to confirm this. So even when it comes to animal carcasses thrown carelessly in a river, it must be on a grandest scale. On Thursday 7th March 2013, Residents of Shanghai city were just horrified when they saw hundreds of pig carcasses floating down the waters of the Huangpu River, which flows through the center of Shanghai and is a source of the city's drinking water. As days passed more and more dead pigs started coming down the river. By 11th of March, 2013, the number of carcasses had increased to 3000 and the worst part was no one knew, from where these pigs came from.

State news agency Xinhua reported that, labels tagged to the pigs' ears indicated they came from the upper waters of the Huangpu River. Local media had reported a week back that a disease had killed thousands of pigs in a village south of Shanghai. It is believed that the pigs probably came from the adjoining upstream province of Zhejiang, where farmers might have dumped them in the river after they died of disease. A local newspaper from Jiaxing, a city in Zhejiang province, had reported on March 6 that tens of thousands of pigs had died of an animal disease in a major pig farming village in the past two months. This report quoted a local villager, who said: "According to our records, 10,078 pigs died in January, another 8,325 died in February. More than 300 pigs die everyday in our village, and we barely have any space left to dispose of the dead pigs." 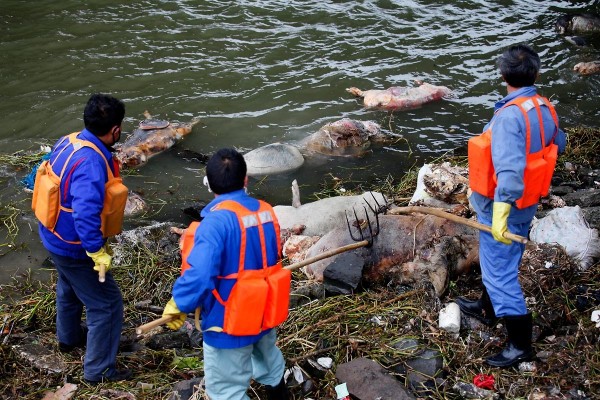 It's not clear why the pigs had been dumped in the river. China's agricultural commission says that it has tested organ samples from the pig carcasses and the results suggest that the animals had contracted a disease called porcine circovirus. However, according to Professor Fred Leung, who specialises in animal diseases at Hong Kong University, this is a fairly common disease in pigs and not usually fatal on its own. Chinese laws require that dead animals should be disposed at community disposal sites or bury them with disinfectant.

Huangpu river is the source of drinking water for more than 20 million Shanghai residents, who are expressing fears over possible contamination of drinking water. Water bureau says that the affected portion of the river accounts for more than 20 percent of the raw water supply to the city’s 23 million people. But the agricultural commission says that as of 10th march 2013, water quality on the Songjiang section of the river, where most of the pigs were found, remained normal and the incident had no significant effect on tap water supply.

As happens with most of the disasters in China, this horrific incident was only made public when netizens started posting pictures on Sina Weibo (Chinese equivalent of Twitter.) The Shanghai government says that a total of 12 boats had been deployed to fish the dead pigs out of the water and it was testing samples from the river on an hourly basis and so far all indicators were normal. (?)

There has been a flood of angry comments from net savvy netizens over Chinese social media. Here are some samples.

Shanghai people truly are blessed, even the water they drink is full of nourishment.
It must be great to be Shanghainese.

If these dead pigs aren’t sent to some unscrupulous processing factory, we can “burn incense” [and thank the heavens for our fortune]~~ ||| Sigh~ these days our hopes/expectations are all so low…

Celebrate, at least they weren’t manufactured into ham and sausages.

If that 3000 government officials died in that river, it’d be an occasion more festive than Spring Festival.

If the water quality is normal like this, we can only imagine what kind of water our citizens are drinking normally.

Recommend tossing in ginger, Chinese cinnamon, Sichuan peppers, fennel, yellow wine, sweet and sour, soy sauce, etc. and then stir it together [to make a broth/soup]…