No train travel for me any more!

Actually, it is a fact that I love train travel. Travelling at a reasonable speed, in a totally relaxed environment is what train travel really offers to any traveller. Besides, there are no personally insulting, stupid, security checks when boarding a train. You can also carry along, whatever you wish and think, that is required for the journey. It could be food, drinks, gels, creams, milk, whatever it is. Once the train gets into motion, rhythmic clinking and clanking that goes on and on forever, always relaxes me completely and I could doze off for hours and hours.
In spite of all my love for trains, I do not intend to travel by trains any more. There are several reasons. Surely, the most prominent reason perhaps, is lack of clean and proper sanitation facilities, offered on the trains in India. 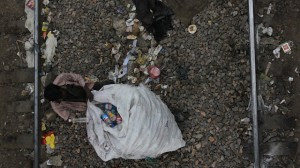 It all starts with the station itself, where my journey is supposed to commence. Even before the arrival of the train, the railway platform and the adjoining railway tracks can no way be considered as a pleasant experience to the eye or more so to the olfactory or the cranial nerve. In fact, whenever I go near a railway platform, the first thing that I notice is the perennial smell of shit, which just engulfs me.
One of the filthiest and dirtiest sights in India is the railway track. The reason for this unhappy or smelly state of affairs is really the open discharge sanitation facility provided in the railway carriages in India. The railways on their part, keep on telling people not to use the toilets when the train is standing still in a station. However, most of the travellers just ignore this. This results into a frequent and often discharge of human faeces and urine on the tracks, even within the station premises. And if that railway station is a fairly busy place with number of trains passing through, then apart from the unbearable stench it creates, the practice also leads to clogging of rail lines at busy stations. 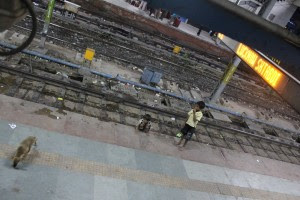 Indian railways is a gigantic operation with 43000 carriages carrying 30 million people over 64400 KM of tracks. And all over these Kilometers and Kilometers, waste from 30 million travellers is dumped directly on to the tracks, through small holes from western-style and squat toilets from inside the trains. Even the railway stations are not spared.

This all pervading smell of shit, does not leave us, even when the train arrives at the station and we enter the compartment, because everyone in the overcrowded compartments has to use these open discharge toilets only all the time, which just keeps the smell going. Besides this, whenever the train approaches a city or a town, it is not unusual to see people urinating and defecating in public near train lines, particularly in suburban areas.

Last year I was forced to make an over night journey by a train as my destination had no nearby airport and the distance was large enough for me not to take a bus. I avoided using the carriage toilet to utmost. One trip, which I had to make to the loo, proved that my decision of keeping away was on the right track, as I found the loo in a terrible state because The train had already covered a long distance taking more than a day of travel and was then nearing the end of the journey.
A recent committee appointed by the Government, fortunately appreciates this fact. The committee report recommends that toilets with nil or harmless discharge be installed within the next five years in all 43,000 carriages used by the railways. In addition, the committee feels that “Apart from the issue of hygiene, this has several serious safety implications arising out of corrosion of rails and related hardware,”
Providing toilets with nil or harmless discharge on all 43000 carriages, is by no means small job. The safety review committee appointed by the railway ministry and led by top Indian scientist Anil Kakodkar estimates that 30 billion rupees ($609.5 million) would be needed to fit new toilets over the next five years.

I do not know from where the railway minister is going to find this money for this kind of non operational requirement. However, if he manages to find the money and elimination of open discharge toilets, becomes a reality in next few years, I am sure that many Indians like me, would quit the air travel and return to the clinking-clanking- rickety-do of the railways.
Let us hope for the best guys.
21 March 2013
at 9:00 AM