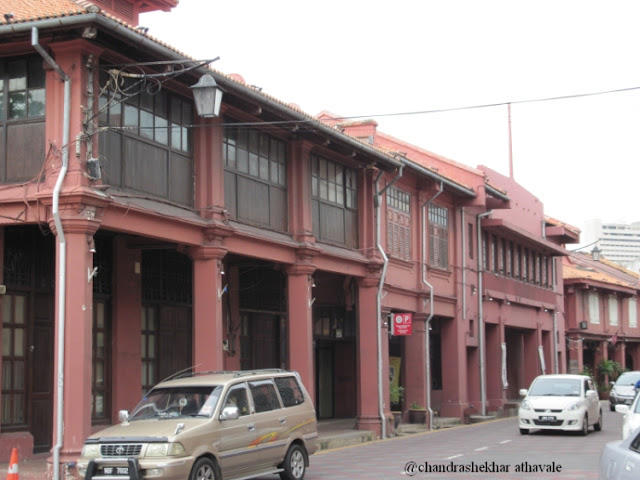 The first thing that I notice in the old parts of the Melaka city is the extreme orderliness of the traffic. This is because, except for one or two major roads, all other roads are one way streets. It becomes a lot easier for the pedestrians to walk along or cross the streets because the vehicular traffic keeps flowing only in one direction. Melaka can be even called as one way city. This traffic arrangement means that even on curvy, narrow roads in old city, one never experiences any traffic jams and traffic moves, sometimes slowly but smoothly. Besides that, I also observe the disciplined way in which all drivers drive here and follow traffic rules except for the Tricycle Rickshaws or Trishaws. I feel that this method of controlling traffic by making most of the streets as one way, might solve the congestion on streets of my home town, Pune. Few years back, traffic police in Pune, implemented one way traffic, on two major streets in the town; J M Road and Fergusson College road, after a great effort, because almost everyone staying in that area opposed the plan. But since then, the traffic congestion in that area is a thing of the past. With that experience, to implement one way traffic plans in entire city would require a Herculean effort on part of the Police, but it is well worth trying from what I see here in Melaka.

While touring the old city, I sense that the city's history and importance of it's geographical location, keeps blending with the modernity all the time. This is only a medium sized city with a population of seven or eight hundred thousand people, what my home town Pune was in 1970's decade. The older parts of this city are all located around the Melaka port, which means that the history of the city is concentrated in this area. Like the fort area, built by British, in the city of Mumbai, a fort existed here also and almost all the sites worth seeing are well within this fort walls. This makes it easier for a tourist like me to just walk around and see everything.

I have already written about the locational importance of Melaka. For this reason, from historical times, Melaka inhabitants always had sprinklings of Arab, Indian, Malay and Chinese traders, who used to camp here. Large consignments of Java spices, Chinese silk, salt, minerals, perfumes, gold, Chinese ceramics and wine were transshipped and traded at this port for many centuries. From 1450 CE Sultan of Melaka ruled over this city. In 1511, a Portuguese armada invaded Melaka port and finally Sultan had to surrender the port to them. After this, Melaka became a Portuguese colony. The Portuguese started controlling the entire trade in the region because of their control of Melaka. This could not be tolerated by other European powers. In 1641, Portuguese armada and Dutch naval ships fought many a battles off the coast of Melaka. This naval war was won by the Dutch and they took control of the port. The British, now firmly in control of India, could not accept the fact that a port of such great importance was controlled by Dutch. Naval skirmishes between British and Dutch navy continued till finally British exchanged areas of Sumatra island under their control with Dutch in 1824 and took possession of Melaka.

This 300 year occupation of Melaka fort, first by Portuguese, then Dutch and finally by British has left many ruins of buildings in the fort area of Melaka. For anyone, who loves history, Melaka fort is like a gold mine of history. UNESCO has declared Melaka as a World Heritage Site in 2008. The present Governments of Melaka as well as federal Government of Malaysia, have fully realized the tourism potential of this place and have taken up number of development projects, making Melaka an interesting place for tourists. A holiday in Melaka is considered by many a tourists as a pleasant and delightful experience no doubt.


Since most of the places of tourist interest in Melaka are around the town center, I start my walking tour of the city from here only. The town center consists of a a crimson coloured old structure and a nearby clock tower. This structure is known here as ' Stadthuys' and was built by the Dutch rulers in 1650 as Governor's residence. Next to this structure, an old church built in 1753, stands tall. Both these buildings have been well maintained and their crimson colour makes them look monumental and splendid. Because of this colour, this entire town center area, looks very impressive to say the least. ' Stadthuys' now houses a museum, which displays large number of artifacts and objects related to Dutch and English rulers. The exhibits include swords, period furniture, rifles, hand guns, revolvers, pistols, Gun shots, bullets, Chinese ceramics, terracotta pots, old plans and models of old fort. I sadly recollect the fact that my home town of Pune is surely much richer in history. However, except for private collection in Raja Kelkar Museum, there is no other museum that tells or describes history of Pune to new generations. We do not even know how 'Shaniwar Wada,' the grand palace built by 'Bajirao Peshawa' really looked like. I feel rather sad at this empathy of my home town people at their history, while I look at the museum here in 'Stadthuys.'

Down below, in the 'Town Center,' I can see number of Trishaws standing in a line. These Trishaws are considered as one of the special attraction of Melaka. We have Bicycle Rickshaws in Kolkata, India, but these Trishaws here, have the passenger side car attached to the side of the Bicycle, instead of at behind as done in Kolkata Rickshaws. Because of this construction, the passengers can see ahead without any hinderence and can take photographs at will. These Trishaws are all highly decorated with plastic flower garlands and electric lights and dazzle in the nights. They have built in music systems and mostly play Bolywood film songs, which are very popular, here in Malaysia. I must admit that 'Stadthuys.' looks strikingly imposing during night time with floodlights focused on the building, which bring out the crimson red colour rather well. 
Around the Melaka fort, there was a fortification rampart built from stones. Soldiers with field guns, always used to be on duty on top of the rampart. A portion of the fortification wall adjoining the Melaka river has been preserved along with the Guns. I have a look at it and then carry on to climb a small hill just behind the ' Stadthuys.' On this hill a Portuguese Captain had built a church in 1521. I climb the hill and have a look at the ruins of the church, which anyway are not very important or impressive. To be frank, I am hardly interested in looking at these ruins. I have taken the trouble of climbing this hill for only one reason. I want to have a good look at the famous straits of Melaka, which can not be seen from anywhere else.

Straits of Melaka; Narrow neck of a bottle


Straits of Melaka is the only gateway available to enter South China sea from Indian Ocean and is shaped like a bottle with a narrow neck. Here in Melaka, this narrow strip of sea is only couple of Kilometers wide. I can see from the hill top, an almost continuous line of ships sailing in the straits. This is the real indicator of the volume of ships sailing through here.

On the west side of this hill, there is an old gate known as Porta d’ santiago. In 1521, after taking possession of Melaka, the Portuguese admiral of the fleet, Afonso de Albuquerque had built this majestic gate and a fortified post behind it. After 1824, during British rule, the post was demolished. When news of this demolition reached Warren hastings, then Governor gereral of British India, he ordered that demolition should be stopped and the ruins should be preserved.. The gate, saved in this way, was later preserved by the British and then by Malaysians in a very careful manner.

I have a feeling of deep appreciation for the way, this historic ruin has been preserved by the Malaysians. In India, many people think that destroying such signs of historic foreign rule is a great symbol of their patriotic feelings and nationalism and want to remove all such old monuments and structures to erase parts of unpleasant history. Nothing can be further from the truth. There is no such thing as good history or bad history. If we could preserve history, along with historic monuments, the future generations could learn about the errors and mistakes committed in the past. If we destroy all the signs and symbols of history, how do we learn about the past? What would happen then is nothing else but repetition of past follies and errors, again and again.


During my school days, I often walked to my school in Pune city, in the mornings and crossed a bridge known as 'Lakdi Pool.' I would see every day, a square built platform paved with stones, standing near one of the banks of the river 'Mutha.' I often used to wonder about that platform: who must have built it? and why was it built? In 1961 great floods, this platform was totally destroyed and only few paving stones could be seen lying around. Later on, I came to know from a well known historian that Narayanrao Peshwa, one of the Peshwa rulers of Pune, who was murdered at the orders of his own uncle in a palace intrigue, was cremated here. His cut limbs were brought here in gunny bags and then were cremated in a fire. A horrible story no doubt, but that platform was always the mute witness to that horror story. Now since it is gone, no one would probably know about this bad part of history ever.

There are at least 15 museums around the Town center of Melaka, which include even museums of stamps and even kites. With the limited time at my disposal, I can probably manage to visit a few at the most. I decide to start with the Palace of the Sultan and the museum it contains.