India's rank in WEF's Travel and Tourism Competitiveness Index 2013, Not bad, but could have been better! 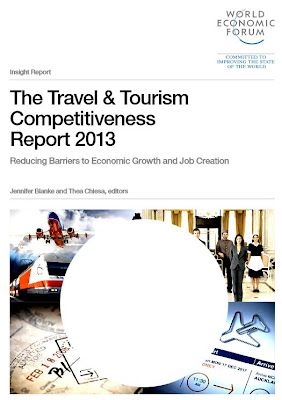 Few years ago, India was designated as the strategic partner nation for the year at the World Economic forum in Davos, Switzerland. India's tourism directorate had then coined a new phrase to attract more tourism to India. This catch phrase called India as “Incredible India!” The World Economic forum is long over, but the catchy phrase continues to be displayed on all bill boards and advertisements put up by Tourism directorate of Government of India.

I was stationed at Singapore in that year. When I read that phrase for the first time, my first reaction was highly skeptical. I remembered the poverty, crowds, shortages of things essential for living and poor infrastructure back home and felt that this catchy phrase was so ironic and an insult for common people of India. 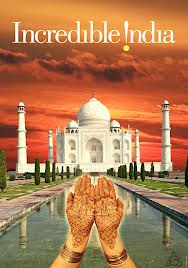 In the intervening years since then, I have taken up seriously to touring places in India, which are of special interest to me. I am not a regular sort of a tourist and like to visit places that have some historic context. From the impressions gained during last few years, I can say now with absolute confidence that Tourism directorate have not been exaggerating even a bit with the phrase, Incredible India! Without any doubt, I can say that Yes! India is truly Incredible.

You can visit India again and again, each time getting awed and amazed, with sheer splendour and glory of India's amazing sights. Every visitor has limited budget and time at his disposal. It is virtually impossible for anyone to see all of India's gorgeous sights presenting themselves in sheer resplendence at one go. One's life span may get over, but India's stock of grand sights is unlikely to be exhausted. There is no such thing as a tourism season, if you want to visit India. Each month of the year is the best period, to visit some or other part of India. At the height of summer, Himalayas beckon you along with Kashmir and Ladakh. In the winter, emerald green world of Kerala or northeastern states, along with otherwise harsh deserts of Rajasthan and salty expanses of Rann welcome you warmly. 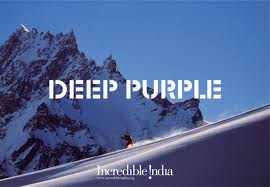 If we consider natural beauty, there is such a wide spectrum of scenarios, that one can visit, starting from towering arrogance of Karakoram mountains of Ladakh or stunning beauty of vale of Kashmir or fabulous sea beaches of Goa with their majestic rolling waves; it is all there to see.

For history buffs, nothing can be better than India. You can share the life of prehistoric people of Indus civilization, who inhabited India 4000 years ago or wonder at the Buddhist rock art and paintings in the caves created at the beginning of the first Millennium or rock temples created few centuries later. For lovers of modern history, there is much to see.

For wild life enthusiasts, India's national parks allow a great chance to visit many animals, beasts and birds in their natural habitat. The list is endless and I can go on and on. Unfortunately, lack of hotels, proper transport infrastructure and many Government policies are the real big impediments in the way of India becoming the top tourist destination of the world. In my opinion, India has to be at least in the first five top destinations of the world on the count of what is available for the visitor to see. Which does not happen because of the factors above.

A new report called ' World Economic Forum’s Travel & Tourism Competitiveness Index (TTC1) 2013' has been published recently on the occasion of WEF's yearly meeting at Davos. This report echoes my feelings expressed above and places India at 65th place along with China at 64rd place. It ranks India at 11th place in Asia Pacific region again along with China, which finds 10th place in the region. 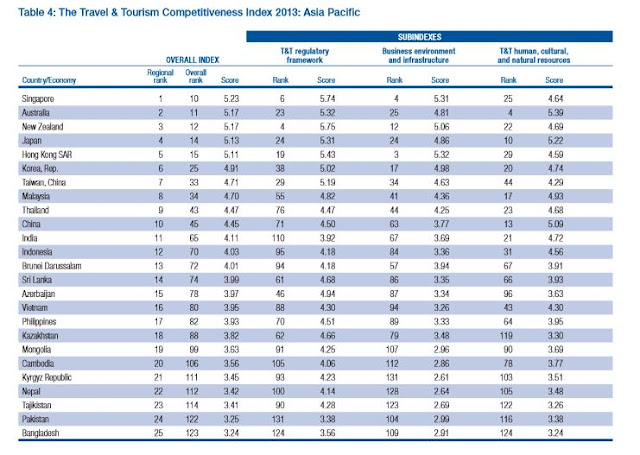 Explaining the basis on which this ranking has been done, this report says:

“The TTCI is based on three broad categories of variables that facilitate or drive T&T competitiveness. These categories are summarized into the three subindexes of the Index: (1) the T&T regulatory framework subindex; (2) the T&T business environment and infrastructure subindex; and (3) the T&T human, cultural, and natural resources subindex. The first subindex captures those elements that are policy related and generally under the purview of the government; the second subindex captures elements of the business environment and the “hard” infrastructure of each economy; and the third subindex captures the “softer” human, cultural, and natural elements of each country’s resource endowments. Each of these three subindexes is composed in turn by a number of pillars of T&T competitiveness, of which there are 14 in all. These are: Policy rules and regulations, Environmental sustainability, Safety and security, Health and hygiene, Prioritization of Travel & Tourism,Air transport infrastructure, Ground transport infrastructure,Tourism infrastructure, ICT infrastructure ( IT network), Price competitiveness in the T&T industry, Human resources, Affinity for Travel & Tourism, Natural resources and finally cultural resources.

Each of the pillars is, in turn, made up of a number of individual variables. The dataset includes both survey data from the World Economic Forum’s annual Executive Opinion Survey (the Survey) and quantitative data from publicly available sources, international organizations, and T&T institutions and experts.”

About India's ranking, the report has this to say:

“ India is ranked 11th in the region and 65th overall, gaining three places since the last edition. As with China, India is well assessed for its natural resources (ranked 9th) and cultural resources (24th), with many natural and cultural World Heritage sites, rich fauna, many fairs and exhibitions, and strong creative industries. India also has quite good air transport (ranked 39th), particularly given the country’s stage of development, and reasonable ground transport infrastructure (ranked 42nd), although the quality of roads (85th) and of ports (79th) require further improvement. In addition, India remains a relatively price competitive destination (20th), even in the regional context. However, some aspects of its tourism infrastructure remain somewhat underdeveloped (ranked 95th), with very few hotel rooms per capita by international comparison and low ATM penetration. ICT infrastructure also remains somewhat underdeveloped and underexploited (111th). Another area of concern is the policy environment, which is ranked 125th because of the long time and high cost required to start a
business, a restrictive visa policy (132nd), and low level of commitment in GATS agreements for tourism services (114th). Other areas requiring attention are health and hygiene standards (109th) and the country’s human resources base (96th).”

I have no idea about the trueness of this report vis a vis other countries of the world, but about India, what is said in this report appears to be a good description of existing realities. This report however according to me has one lacuna. It is considering all the potential tourists in the world as a monolith having same requirements and expectations. Let me explain; When a wild life enthusiast goes to a national park to see wild life, he his hardly expecting a vacation of comfort and is least bothered about non availability of air conditioned accommodation or wi-fi network. Similarly a person going to Himalayas is aware that there would be no city comforts available to him on his trek and does not give any importance to it. The factors mentioned in the report are mainly true for tourists going on vacations to spend few days in a comfortable location with super luxury and do some sight seeing if time permits. Projecting requirements of all tourists on the same scale may not be the right way at all.

Recently, on a tour, I visited two places of religious importance on west coast of India, which are considered as highly revered and the temples therein are greatly worshiped in India. During the tour, I saw hundreds of devotees visiting these temples. None of the these tourists was really bothered about quality of hotels or food or comforts available. They had come there with just one aim in their mind, to visit the temple and prey before the idol to their heart's content. As long this was fulfilled, nothing else mattered or was of importance. Where do you fit these tourists in WEF's report of tourism? You possibly can not and this is the failure of this report.

Whatever WEF report says, I feel that in spite of many shortcomings, India is and would remain a top tourism destination country of the world. I should really have presented my credentials before making this statement but the fact remains that I have traveled to many top destinations in USA, Europe and Asia and know what I am talking about. For anyone who is curious about the grand creations of the mother nature, wildlife or history of humans, India is a must tourist destination: whatever the WEF report says.