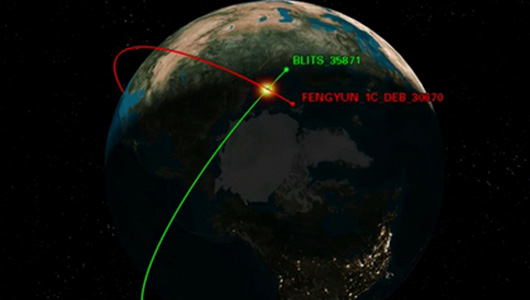 Blits was speeding along its pre-planned path, when an unidentified object hit it, also moving at a tremendous speed. The collision was head on and in a fraction of a second, it was gone; blown to smithereens.

Fortunately, I am not describing about some horrific or tragic accident that has happened on some expressway or any other road. I am talking about an accident that happened at a much higher level; few thousand Kilometers up above the earth; in deep space, to be precise.

Blits or 'Ball Lens in the Space' was a Russian satellite, a 17-cm glass sphere, designed for laser ranging experiments, that was launched in September 2009. Russians say that it was knocked off its orbit, when it had a direct collision with a wayward fragment of a weather satellite, floating somewhat away from main body of the fragments in the space and moving at a super fast speed of 8Km per second. The collision left the satellite spinning faster and facing the wrong way, rendering it unusable.

In 2007, Chinese had launched an anti-satellite missile, which had destroyed its own weather satellite,the FY-1C of the Feng yun series in a polar orbit, at an altitude of 865 kilometres (537 miles) and having a mass of 750 kg. The kill missile travelling at a speed of 8 Km per second, from opposite direction had a head on collision. The debris from the destructed satellite has been circulating around the earth in space, since then.

According to Russians, Blits was hit by one of the pieces from this debris. The incident actually took place in January 2013, but came to light only recently, when Russian operators of the satellite, asked a U.S. space object tracking service for help. 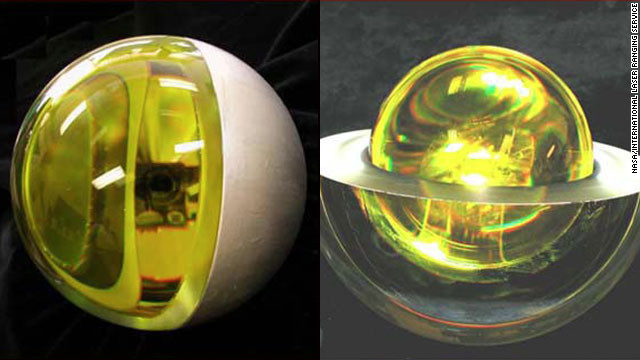 Boris Shustov, head of the Russian Academy of Sciences Institute of Astronomy, says; “About 10 tons of space garbage clutter low earth orbits of up to 2,000 km, Out of more than 600,000 pieces of space objects larger than one centimetre, only 5 per cent have been tracked down and catalogued, while 95 per cent remain undetected.”

Vladimir Popovkin, head of the Russian Federal Space Agency (Roscosmos) agrees and says; “Three years ago the probability of collision between a spaceship and debris larger than one centimeter was estimated at one case in every five years while today it is likely to occur once in 18 to 24 months, Even if all satellite launches are halted, space debris will continue to grow in a chain reaction of junk-to-junk collision.”

Recently, when an Indian Rocket was to have been launched, its launch was delayed by few minutes because launch engineers had detected some debris, which could have hit the rocket rising up. Rightly, There are no effective ways of protecting spacecraft from debris flying at nearly 8 km a second, except for an orbit correction. Even International Space station crews have to perform collision evading maneuvers at least once in a year.

Space junk problem gets more and more serious as we go up. At geostationary orbit heights or at 35,786 kilometres or 22,236 miles above the Earth's equator, since there is no downward force of gravity, space junk could stay there for millions of years. Unfortunately, all of our communications and weather satellites are also parked at this height only.

According to Mr. Vladimir Popovkin, there is a real chance that Geostationary orbits, which are a unique resource, may be lost in the next 20 years because of man-made pollution of space junk.

Russia is rightly ringing alarm bells over the snowballing problem of space junk. However there are no easy solutions and some ways to remove junk can be devised only with an international cooperation.