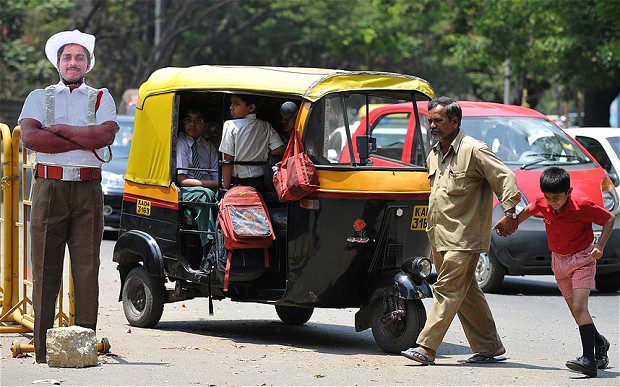 In my home town Pune, I often see drivers totally disregarding traffic lights as well as all traffic rules, whenever a traffic junction remains unmanned by a policeman. The problem has become so acute that even when you have the green light, you need to cross a road junction with great caution as it is quite likely, that a motor cycle rider might suddenly turn up ahead of you at full speed, when he has a red light or even when you are travelling in an one way street.

It is no wonder that in India, road death numbers are increasing exponentially even with a low rate of car ownership. Reasons for this, are not difficult to judge and include poor law enforcement, untrained drivers and bad roads. These factors make this country one of the world's leading centres of road deaths.

I somehow thought that this disregard for traffic rules was something special for my home town. But sadly, I am wrong. Vehicle drivers in India's high tech capital, known as the home of India's flagship outsourcing industry; Bengaluru; also seem to follow their brethren in Pune, in disregarding the traffic rules.

The police in Bengaluru find that many drivers will only obey traffic rules if they think law enforcers will reach out and apprehend them. Additional Bangalore police commissioner M.A. Saleem says and adds "and we can't be omnipresent."

To solve this problem, Bengaluru Police have come up with great new Idea. They have started putting up cardboard police at street junctions to scare drivers into believing that the long arm of the law is watching them.

What are the reactions of the drivers? One Bengaluru driver said "It's good. From a distance it looks like a real cop." Another vehicle rider agrees that he had been fooled by the cutouts. He says; "Two or three times we thought it was a real policeman standing there and we slowed down." 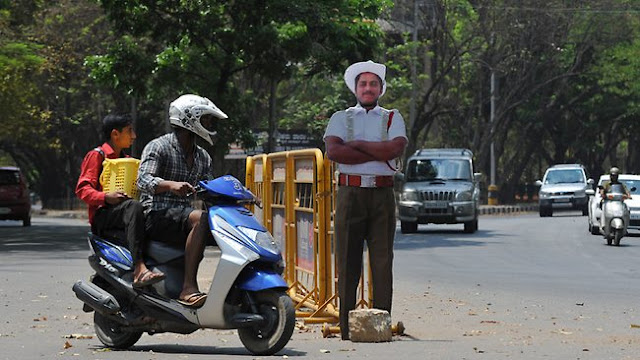 Police commissioner says happily; "These cut-out cops are very effective and they can be on the job seven days a week."

But, Bengluru's traffic offenders came up with a bright idea. They just stole one of the three cardboard cops that have been put up by Police at night time. Police commissioner says that he is not discouraged and to remedify the theft, he intends to remove the cutout, when it is dark to reduce chances of theft.

Such lifesize cutouts are frequently used in places like Britain and North America as a crime prevention measure. According to Bengaluru Police, this is the first time that such an idea had been tried in any of the Indian cities. The existing three cut outs would be joined by 7 more cardboard cops soon, making their total number as 10.

I hope Police in my home town too try this idea. It might reduce the lawlessness to some extent.