Reacting to a neighbour's big bang 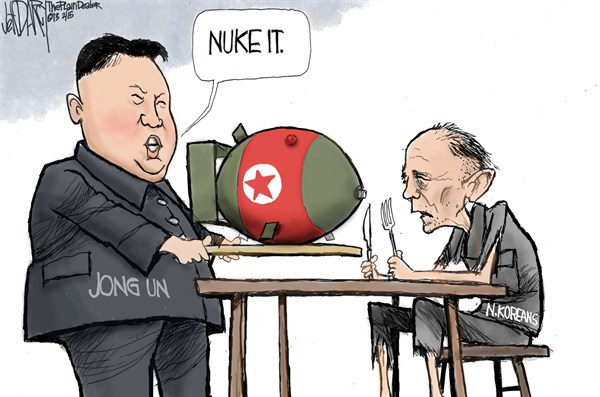 North Korea is perhaps one of the most sanctioned and isolated countries of the world. With the exception of China, who is North Korea's top ally and trading partner and who also supplies the impoverished country with crucial economic and humanitarian assistance, there are not many friends for this country. Acting under a perennial fear psychosis, that US, Japan and South Korea have made it their highest national goal, to obliterate it from map of the world, it has developed a range of rockets that can hit targets from few hundred to few thousands of Kilometers and has been making efforts to develop atomic war heads for its rockets. In continuation of it's efforts in this direction, North Korea conducted its third nuclear test on February 12, despite warnings from the international community. It has also been in forefront in the illegal trade to supply missile parts and designs to some other rogue countries.

The test has caught China on a wrong foot, who always believed that it was one of the few nations who would be able to influence Pyongyang. The international observers feel that this nuclear test is not a good development for China, North Korea has embarrassed China with this test and it is hugely insulting to it. Chinese also have found it to their horror that the test was conducted at a site, barely an hundred Kilometers from the border. China’s state news agency, Xinhua, has vocally condemned Pyongyang’s nuclear test, saying it was “another manifestation of the attempt of a desperate DPRK” to keep the threats it perceives from the U.S., Japan and South Korea “at bay.”

I however found reactions from Chinese netizens published on the web, far more representative of what ordinary Chinese think of this test. Sina Weibo, a Twitter-like service in China, was full of caustic comments, critical of North Korea and some netizens even compared North Korea to a canine. Here are some excerpts.

One netizen writes, “ Pyongyang was like a “crazy dog” that had humiliated Beijing.”

A user says that “Mao raised a dog to watch the door, turns out the dog is crazy.”

Another one writes that “North Korea slapped China. China raised a dog to bite its owner.”

“The watchdog is making trouble in front of the owner’s door,” wrote another. “But the owner can’t do anything.”

TeaLeafNation.com, a well respected e-magazine devoted to China, reports even more comments of Chinese netizens. According to the magazine, a Sina Weibo user wrote, “That fatty Kim really is a mad dog,” referring to North Korea’s leader Kim Jong-un. The post has since been deleted. Another commentator called for China to stop giving aid to North Korea, and said, “Every Chinese person with a conscience, right now is asking: Why do we support North Korea?”

Another sarcastic comment on Sina Weibo, is one of the best. A netizen says that the test is potentially positive for China. The reason for “ China to benefit is that now in comparison to North Korea, it doesn’t look so bad.”

Another user, does not agree with this comment and says, “Not so, North Korea simply doesn't trust China and is not willing to be inhibited by China."

Zhuanshengben, another Weibo user ridicules Chinese policy and says, "For China alone to emphasize China and North Korea's so-called friendship, this is the ultimate stupidity."

I found this cartoon on the web at PareshNath@cagleblog.com, which summarizes Chinese reaction very aptly. 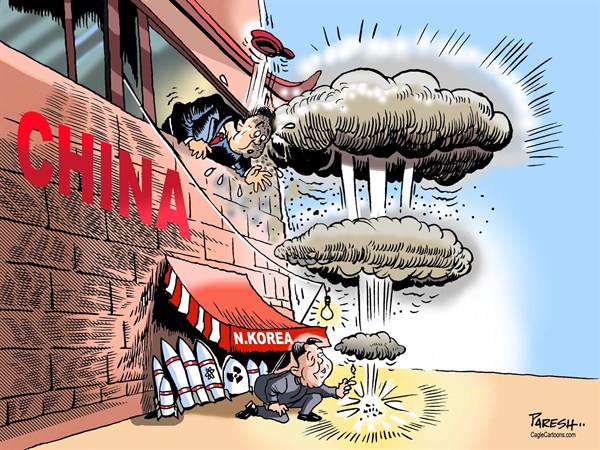 According to new reports from Bejing, Chinese Government is hard put trying to allay fears of people about possible radiation threat from across the border as the test site is only about 100km away from the border and tries to reassure the public that their country is safe from nuclear contamination.

A statement by the environment ministry on China Central Television on 14th February 2013 morning says,"North Korea's nuclear test has not affected China's environment or public health. " Ministry's web site assures that readings from 25 monitoring stations, on and near the border, were at normal levels at 10:00 local time on 13th February 2013.

The official Chinese reaction is however much more guarded even when it recognizes the potentially dangerous situation. A latest report on BBC website, gives more details and I quote.

Peng Guangqian of the Chinese Academy of Military Science in an interview with Xinhua, calls the nuclear test "regrettable" and "unwise", but reminds the international community, especially the US, to exercise restraint and take full account of North Korea's security concerns. Yu Sui, professor at the China Centre for Contemporary World Studies, dismisses North Korea's test as "half helplessness and half bluff" meant at raising its "bargaining price", but also lays the responsibility on the US to sort out the crisis. Wang Fan, an expert on Korean studies at the China Foreign Affairs University, is worried in his interview with China Daily that the US and its allies, Japan and South Korea, may exploit Pyongyang's nuclear test as an excuse for a military build-up in the region.

Qiao Xinsheng of Wuhan's Zhongnan University of Economics and Law, a regular commentator on foreign policy, writes on China Review News, a state-affiliated commentary website that the Chinese military must guard against a refugee influx if the UN Security Council backs US-led air strikes on North Korea. He adds,"North Korea is entirely to blame for where it has headed today. China has paid a heavy price amid a series of instances of nuclear blackmail," He adds, "If North Korea does not change its ways by immediately promising not to conduct further nuclear tests and rocket launches, China will no longer assume the obligation of protecting North Korea. North Korea must then face a military strike from the US alone.”

I find this change in Chinese attitude, hugely interesting. They are in real quandary and just do not know, how to react to the situation as is clearly seen from the reactions. It would be interesting to see, how they would finally respond in security council, if United nations security council decides to back US-led air strikes on North Korea.