Kutch and Kathiawar: A tryst with history, Part VI

Morbi or Morvi is a medium sized city with a population of about 250000. Like most of the cities in Kathiawar, this was also a small princely state till 1947 and like most of the states of those days, it was also a poor state (Classified as Class III by British) without adequate resources. Things however changed for this small state in 1879, when a dynamic prince, Waghjee Thakor, was appointed by the British to rule over the state. Immediately thereafter, he started taking steps to increase the prosperity of his Morbi Kingdom. He started to build, in 1886, Railway lines for the convenience of people and transportation. He developed Navalakhi port located at eastern tip of the in the Gulf of Kutch, for transport of salt, which was the major produce around. Besides transportaion projects, he built Schools, Colleges and Hospitals also. After his death, Prince Lakhdhirji Thakor was announced as king of Morbi. He also did remarkable job in the history of Morbi. In his time Electric powerhouse and Telephone exchange were built. He also built Temples, Technical High School and Engineering college.

Morbi Princes were very keen about development of industry in their state. Considering abundance of china clay in the state, they actively welcomed ceramic or pottery industry to the state and offered all kinds of incentives. Today Morbi has more than 350 industrial units, manufacturing ceramic products. There are also many clock manufacturing units in the city today. 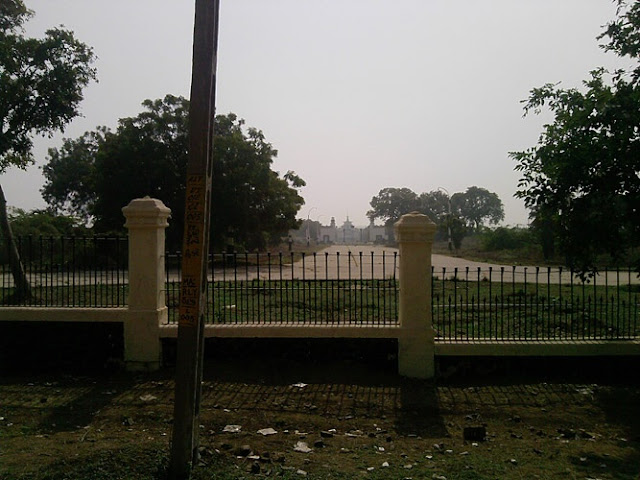 Prince Lakhdhirji Thakor built around 1940, a new palace for the royal family. This is the first item on my itinerary today. This palace is just on the side of railway line near Nazarbagh station. The palace compound and the grounds are very imposing and impressive. After getting an entry in the palace grounds, a curving road takes us to the compound of the palace proper. The gate for entry is a huge one and very imposing. Our station wagon gets easily through one of the smaller gates on the sides of the main gate. A straight road leads to the front side of the palace with an impressive facade. However we turn left and reach a side door with a porch.

The palace itself is a two storied building, with top class modern architecture of 1940's, which reminds me very much of the buildings built on Mumbai's Marine drive during those days. Rooms on the corners have nice curvy shape at the corner. The building has bays and all windows are placed in a band, with slabs projecting out above window lintels to protect from harsh sunlight coming in.

We are shown only the ground floor, which essentially has three suites in north-south direction with each suite consisting of a hall, dining room and bed room, separated by open courts in the middle . The rooms at the ends, which spread along east-west direction, have Darbar hall, lounge for visitors and a bed room on one side and a swimming pool and a billiards room at other end. Each and every room is furnished and decorated in a manner which shows an exclusive and rich taste. Even the marble flooring of rooms have used marbles of different designs. I am able to imagine the grandeur and lavishness of the life style of these Princes, who essentially were dependent on the British crown for their survival. One interesting piece of decoration in Library room is a map of India of 1944, made by using pieces of wood from different trees. For each state and province a different type wood is used. Another noteworthy observation is about the painting and photographs, mainly of British origin. 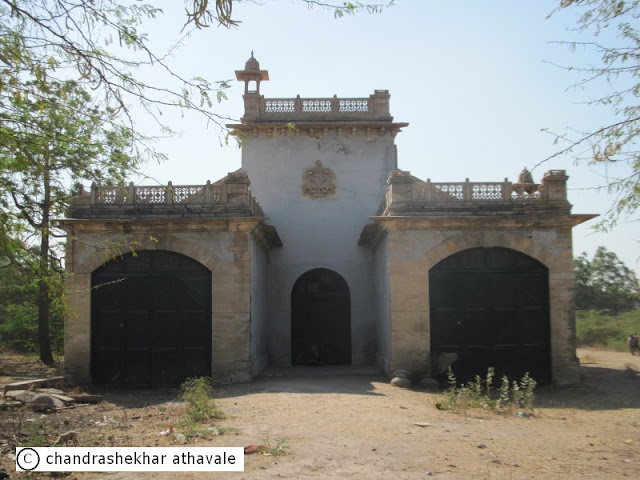 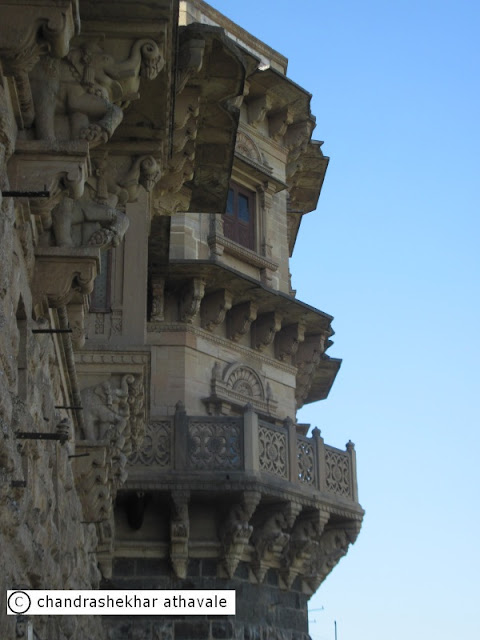 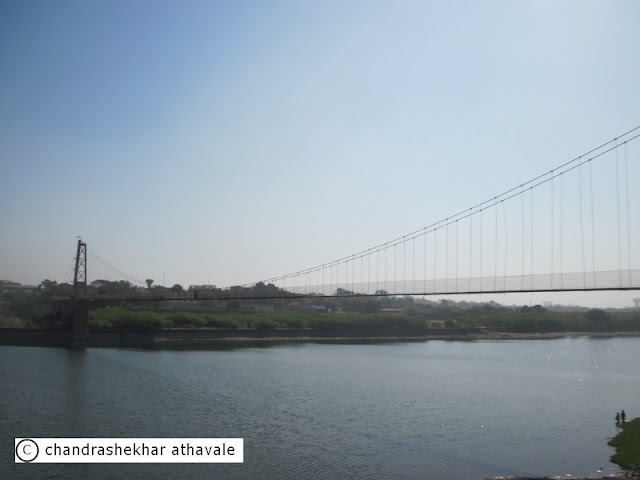 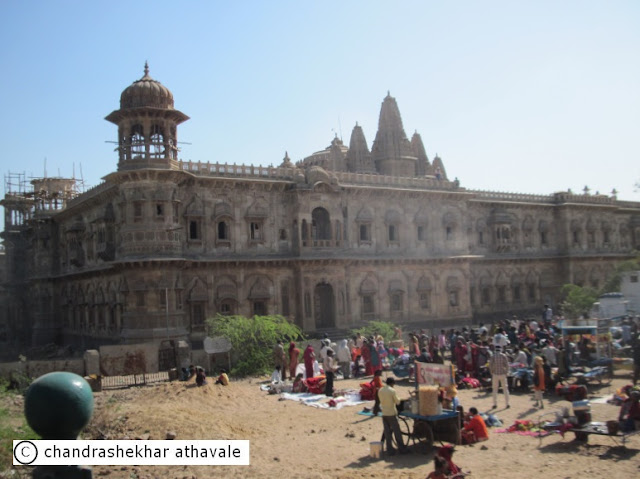 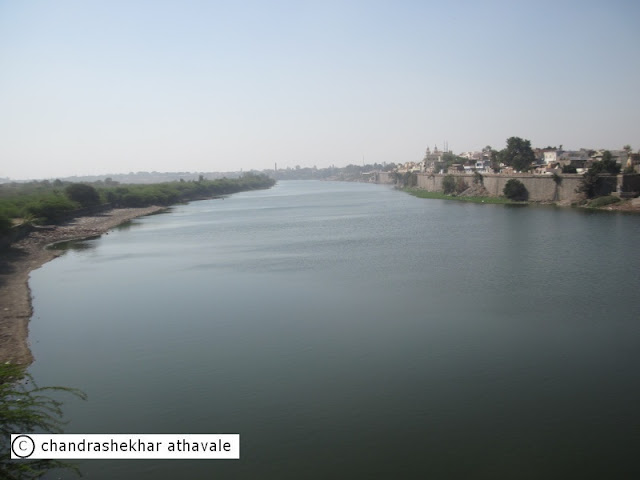 After visiting the palace, I have a look at the original locomotive shed of the Morbi railway, a suspension bridge on Machhu river, old or Darbar Gadh palace and finally Mani Mandir palace and a steel structure known as green tower.

In the afternoon, we start for the main attraction of this place. A visit to Little Rann, which is about 40 Km from Morbi. Even though Morbi city is part of Kathiawar region, Little Rann has always been part of Kutch. This means that I am revisiting Kutch. We leave on highway 321 or Morbi-Jetper road. After Jetpar, we cross the highway 7, which connects to Gujarat capital, Ahmadabad. The road now leads to Khakharechi town. There are fields around with standing crops of Jira and Erandi. The waters on Narmada river from south, have been brought up to here, through a canal and have brought prosperity to this region. 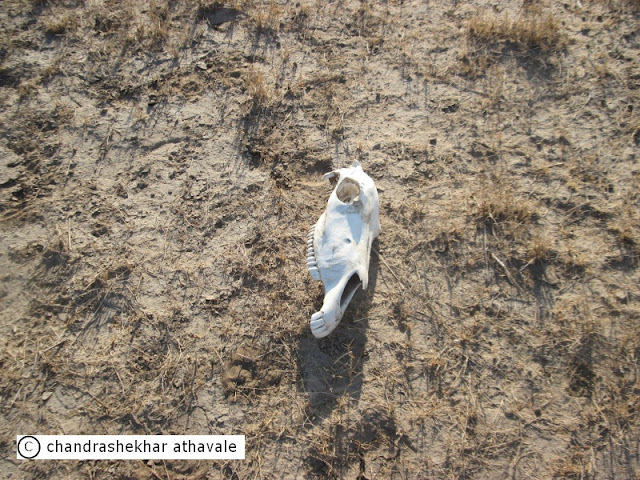 Skul of a wild ass

Soon we reach the village of Wenasar. The little Rann starts from here and spreads north. We now pick up a dirt track to go in the Rann. The land scape is now strikingly familiar. Reddish brown soil, Gum Arabic trees, grasses and little hillocks. Soon we reach dried mud flats. Cars can be driven on this surface during winter and summer, but it is better to always follow someone else's tracks. I can see at a distance, a breached dam. This was named as Sagar dam, but it got breached during floods. We stop the car on a slightly high ground and get out to search for the wild Asses, which is the principal reason for this little excursion. I see at one place, bones and skull of an ass. Possibly died few years back. The vultures and ants have done such a good scavenging job that the bones look spotlessly clean. We manage to spot one male ass roaming alone, as they always do, but he is so far away that it is difficult to photograph him. 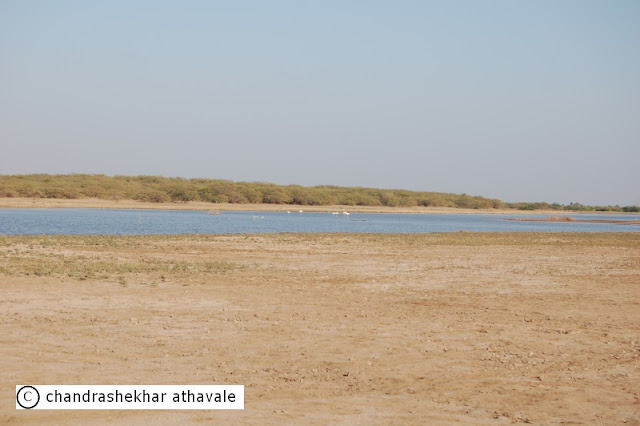 We move on. On the right, I can see a little pond of water, known as Canal pond, as it contains water mostly leaked from the Narmada canal. I can see few tiny white spots on the blue surface of the pond. We push ahead. Parking the car at a safe distance, we observe the white spots through Binoculars. There is a group of 4 Pelicans and behind them are 6 Flamingos, 4 adults and 2 young ones. Finally I have managed to see them, as they have been eluding me throughout this trip. Flamingos stand rock steady in water looking for fish. Their orange legs stand out over beautiful blue waters of the pond. 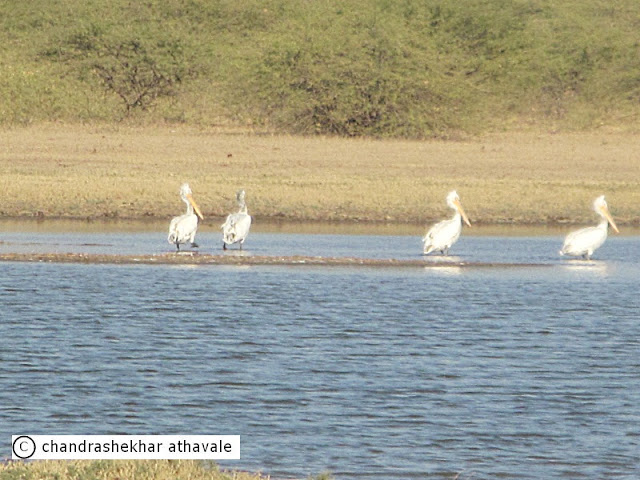 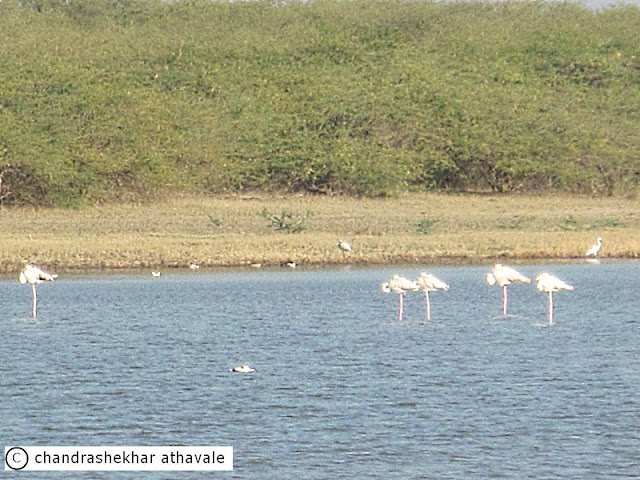 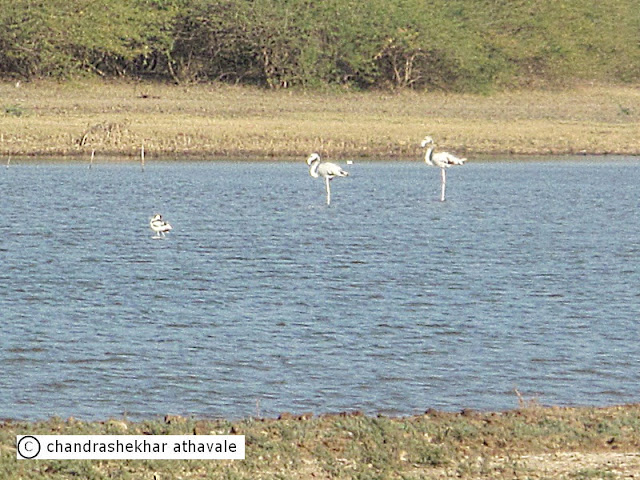 We now turn back and continue on a highground known as 'Handi bet.' Police were using this area for shooting practice. But due to pressure of environmentalists, they have shifted out of this and wild asses have returned and have started roaming around. 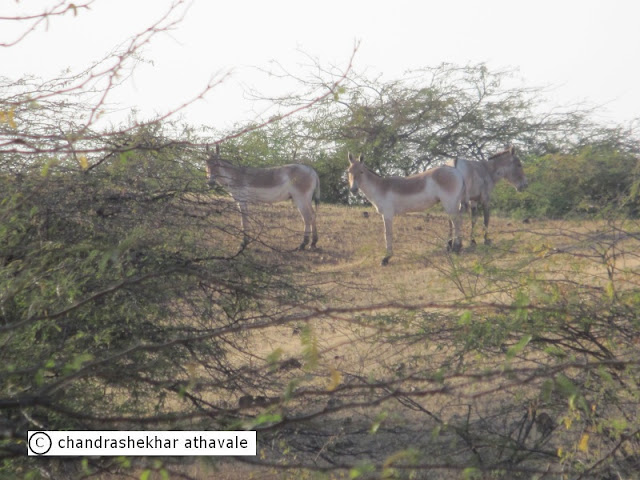 We do not require much time to locate a group of 3 fabulous animals, all mares. They are quite tall almost like a horse with white and brown patches on body. Further ahead, we see another patch of white Rann, which just looks like Great Rann White desert. However, they extract salt from here for commercial purposes. 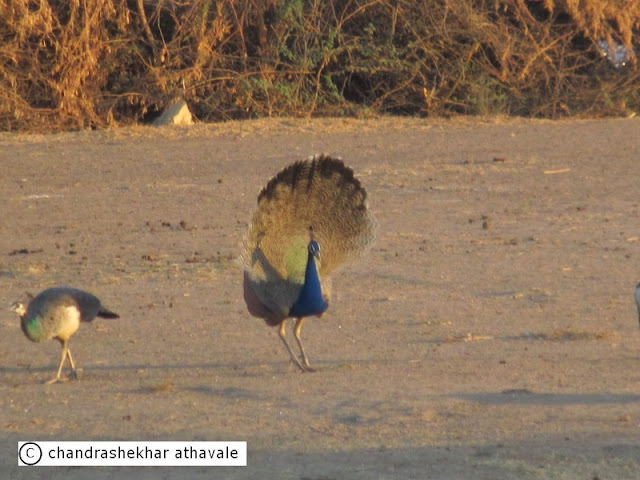 While returning, we see a flock of Peacocks and fowls near town of Khakharechi. The Peacocks have lost their blue-green feathers, though their necks look bluish-green. Two of the male birds have fanned out the feathers in a grand fan but the spread out feather fans have only a brownish-grayish look. No wonder that none of the fowls are paying any attention to them.

Tomorrow, we leave for the coastal town of Dwarka.